Children are a blessing from the Lord, and motherhood is a gift to mankind. In many cultures across the ages a woman’s value was based on her ability to reproduce, and her worth went up even more if she gave birth to a son. Not everyone can have children, though, so it has been a source of pain and suffering for many families through the years. Fortunately, a woman’s value today is not based solely on her fertility, but rather on the many other gifts and talents she might possess. The Scriptures do provide a source of hope and comfort to those who desire children, so here are my top 7 Bible verses about barren women.

Abraham’s wife, Sarai (later known as Sarah), is the first woman mentioned in the Bible that was barren. Interestingly, God chose her and Abraham to be the forefathers of the great nation of Israel when they were not only unable to have children but when they were also quite old. Apparently, Sarah had accepted the fact that she would not have children, and she even laughed when the angel prophesied about her upcoming pregnancy. Nonetheless, God repaid Abraham’s faithfulness by granting him a son of promise, Isaac, in his old age. So God made the impossible possible, when he blessed Sarah and Abraham with their own son who eventually became a patriarch of the Jewish line. This is fascinating, because Sarah was not asking the Lord for a child at the time, but she was content with her situation.

Genesis 25:21 “And Isaac prayed to the Lord for his wife, because she was barren. And the Lord granted his prayer, and Rebekah his wife conceived.”

The second woman mentioned in the Bible that was barren was Isaac’s wife, Rebekah, and she was very distraught over her inability to become pregnant. As it mentions here in this verse, Isaac loved his wife very much and he prayed for her to be given a child, and the Lord granted them a baby. God healed her of her infertility, and he granted Isaac and Rebekah not just one child but twin sons, Jacob and Esau. Rebekah was apparently overcome with grief at her inability to conceive, but God heard her and her husband’s cries and made the impossible possible.

Judges 13:3 “And the angel of the Lord appeared to the woman and said to her, “Behold, you are barren and have not borne children, but you shall conceive and bear a son.”

Samson is one of the most famous judges mentioned in the book of Judges, because he was a man of incredible strength. He was a biblical “hulk” figure, as he killed many Philistines during his lifetime. Although in his lifetime, Samson struggled with some human weaknesses, God called him from his mother’s sterile womb to bring hope to the broken Israelite nation. His mother was also said to be barren, and even though Scriptures do not tell us whether she cried out to the Lord for a child or not, we read here that God blessed her with an amazing son. She apparently sought to obey the Lord in all things, as she and her husband even asked for a second visitation from the angel so that they would know exactly what to do to care for and bless the child that God had announced he was going to send them. I believe this is a point for anyone waiting to have a child, as most importantly we should seek to love and obey God above all else.

Psalm 113:9 “He gives the barren woman a home, making her the joyous mother of children. Praise the Lord!” 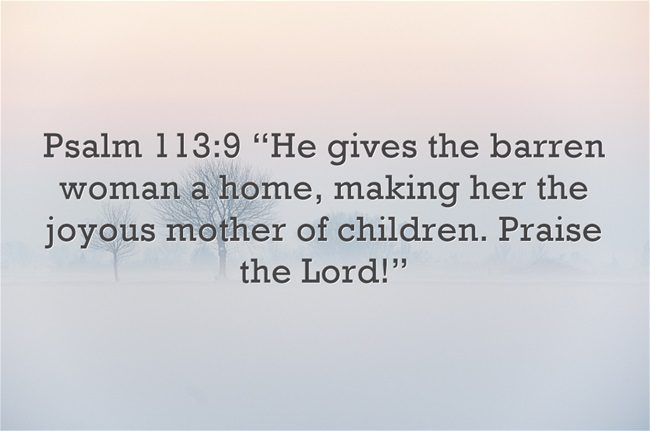 This verse in the book of Psalms is one of my top 7, because it describes perfectly what God is all about. He is the one who takes the negative challenges in our lives and turns them around and uses them for our good. Besides the story of Sarah, Rebekah and Samson’s mother, we also have the stories of Rachel, Jacob’s wife, and the prophet Samuel’s mother, Hannah, who were also infertile. They all started out longing for a child of their own, and then God blessed them with very special children. He turned their barrenness and grief into fruitfulness and joy. They had all been “diagnosed” as barren, but God had better plans for each one of them and their offspring. If God can do that for them, he can also do that today for anyone crying out to him for a child of their own.

Isaiah 54:1 ““Sing, O barren one, who did not bear; break forth into singing and cry aloud, you who have not been in labor! For the children of the desolate one will be more than the children of her who is married,” says the Lord.”

Although we see in the Bible many instances where the Lord healed women of their infertility and gave them children, this verse also brings hope to those that will never conceive their own offspring. The prophet Isaiah reassures these women that God can bring them many spiritual children instead, and that they should still sing and rejoice over the blessings that God does provide for them. The Lord always has our best interests in mind, and we should look to him for our hope and our joy.

Luke 1:7 “But they had no child, because Elizabeth was barren, and both were advanced in years.”

John the Baptist is another important biblical figure who was born to a woman confirmed to be “barren.” However, the Lord did not allow that report to stop him from granting Elizabeth and her husband, Zachariah, a wonderful son—the forerunner to the Messiah. The Bible tells us that they were both righteous before God, walking blamelessly in all the commandments and statutes of the Lord, so their hearts were in the right place. Elizabeth, like her cousin, Mary, was highly in tune to the Lord’s presence and the Holy Spirit in her life, as we read that she understood that her baby leaped in recognition of the Messiah in Mary’s womb when they came to visit her. God is not restricted by diagnosis’ or old age or medical reports, as he commands even the sterile womb of an older woman to open and become fertile once again. This is especially true if the couple has truly put the Lord first in their lives.

Luke 23:29 “For behold, the days are coming when they will say, ‘Blessed are the barren and the wombs that never bore and the breasts that never nursed!’”

I included this verse in my top 7 Bible verses about barren women, because God’s word says that there will come a day of hardships and trials when women should be thankful for not having children. It is hard for us to conceive of that possibility now, but whatever the circumstances in our life we should always trust that God’s plans for us are perfect. He knows better than we do what is best for us. If you are crying out to the Lord for a child at this moment, this verse may be his response to you. No matter what, trust him at all times!

Bearing children has sometimes been taken for granted over the years, and yet in the Bible we see lots of examples of women who were considered barren at the time. Many of these women prayed for a child, and the Lord granted them their requests. So this should be an encouragement to anyone who might be praying for a child today, as God can overcome and heal a couple of any diagnosis of infertility. Likewise, while there is no doubt that women are blessed, and that motherhood is a blessing to mankind, a woman’s worth is no longer found in just having children today. Even though barren, women still have worth, value, and purpose, and the key is to just stay close to the Lord and trust in him at all times.

I am very grateful to be a Christian author, editor and translator. Some of my favorite pastimes include traveling, and connecting with family and friends via social media. When I am not working, I love spending time with my family and especially with my precious three-year-old grandson.

August 14, 2015
What Does Deliverance Mean? A Biblical Definition of Deliverance
Next Post

What If Science Caused the Pandemic?,...
Cranach
Related posts from Christian Crier