Top 7 Bible Verses For Police Officers To Reflect On

Here are 7 Bible verses for police officers, sheriff’s officers or any other officer to reflect upon.

Romans 13:1 “Let every person be subject to the governing authorities. For there is no authority except from God, and those that exist have been instituted by God.”

Christians are told that the governing authorities are given their authority by God so whoever resists the governing authorities are actually resisting God and that will not end well at all. I know of a police officer in the city where our church is at that also knows Romans 13 and one time when I didn’t make a complete stop, he reminded me of this. I told him that I had no excuse and deserved a ticket. Fortunately, he gave me a warning.

Once again, Romans chapter 13 covers those civil authorities who are ordained by God and if they are ordained by God when someone resists these authorities, they might as well be resisting God and no one can resist God for very long. Officers can rest in the fact that they are placed where God wants them placed in His sovereignty. 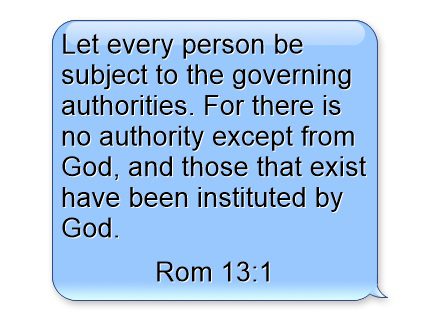 Even though this was written to Joshua and the nation of Israel, the implications for the police officer are similar because he or she wields the sword for God. The man or woman who works to enforce the law is an agent appointed by God for God’s purposes and anyone who violates the law has only themselves to blame when they are caught and punished.

Matthew 5:9 “Blessed are the peacemakers, for they shall be called sons of God.”

Naturally the context of this verse is not directed toward police officers but their job is to keep the peace or to protect and serve and that they do. They are blessed by God for they are part of the peacekeeping of society.

John 15:13 “Greater love has no one than this, that someone lay down his life for his friends.”

This verse also applies to those who have served in the military and are still on active duty. They put their life on the line for us nearly every day as do those who are in authority on a local basis. Police, sheriff, highway patrol, and state troopers are among those who have a high risk job where their job is to protect others, even at the risk of losing their own life.

Romans 13:3 “For rulers are not a terror to good conduct, but to bad. Would you have no fear of the one who is in authority? Then do what is good, and you will receive his approval.”

We have no fear of those who enforce the law as long as we obey the law. For those who live lawful lives, they have no worries about the law officers but for those who are lawbreakers, they are a terror and they have every reason to be in dread.

What a great description of the job duty of police officers or any other law enforcement official because they do defend the weak, they maintain the rights of the afflicted ones and the destitute, and they also rescue the weak and the needy by delivering “them from the hand of the wicked” lawbreakers.

We owe a debt of gratitude to all law enforcement personnel and agencies. They lay their life on the line for us in order to protect and to serve. We should express our thankfulness to them and tell them how much we appreciate their service because they have been appointed by God (Rom 13:2) and we are to be in subjection to them (Rom 13:5) for the represent God Himself (Rom 13:2).

September 28, 2015
Is Life In Heaven Supposed To Be Similar To Earth?
Next Post