A Study on Church Leadership

The character and effectiveness of any church is directly related to the quality of its leadership.

The Bible stresses the importance of qualified church leadership and specific standards for evaluating the moral character of anyone that would serve in the ministry. A church might go only as far as the leadership takes it. Some churches will evangelize while others fossilize, but if there’s a failure to uphold the integrity of church leaders, there’ll be failure in the pews. Timothy faced such problems while in Ephesus, and this is why Paul gave him a detailed explanation of the qualifications for elders (1 Tim. 3:1-7), and it has been used throughout the centuries for this same purpose. The Apostle Paul had started the church at Ephesus, staying there around three years in order to train church leaders (Acts 18:19; 20:17, 31), so the Ephesian church had solid leadership, thanks in large part to Paul’s laying down qualifications for elders and deacons.

Almost like a prophetic statement, Paul told the Ephesian elders that, “I know that after my departure fierce wolves will come in among you, not sparing the flock; and from among your own selves will arise men speaking twisted things, to draw away the disciples after them” (Acts 20:29 30). In other words, Paul was certain that Satan’s most effective weapon to attack the church is to provide false or unqualified leaders who preach a false or works-based gospel, and that’s exactly what happened. After Paul was released from his first Roman imprisonment, he decided to leave Timothy at Ephesus, leaving him specific instructions regarding church leadership. One requirement was that “an overseer must be above reproach, the husband of one wife, sober-minded, self-controlled, respectable, hospitable, able to teach, not a drunkard, not violent but gentle, not quarrelsome, not a lover of money” (1 Tim 3:2-3). Of course, the underlying implication is that these characteristics were missing in the Ephesus elders.

Departing from the Word

Not only was it understood that some would depart from the faith, but some of the leaders would depart from preaching of God’s Word, so Paul told Timothy that an elder must not be “a drunkard, not violent but gentle, not quarrelsome, not a lover of money. He must manage his own household well, with all dignity keeping his children submissive” (1 Tim. 1:3 4, 6-7), but he also “must not be a recent convert, or he may become puffed up with conceit and fall into the condemnation of the devil. Moreover, he must be well thought of by outsiders, so that he may not fall into disgrace, into a snare of the devil” (1 Tim 3:6-7). If someone is ordained too quickly, they are not equipped or experienced to handle the Word correctly, and they can easily mislead others…either knowingly, or unknowingly. Either way, it must be addressed.

First Timothy 6:3-5 says, “If anyone teaches a different doctrine and does not agree with the sound words of our Lord Jesus Christ and the teaching that accords with godliness, he is puffed up with conceit and understands nothing. He has an unhealthy craving for controversy and for quarrels about words, which produce envy, dissension, slander, evil suspicions, and constant friction among people who are depraved in mind and deprived of the truth, imagining that godliness is a means of gain.” Much of their endless speculations and contradictions (like between their teaching and the way they live) is “falsely called ‘Knowledge’” (1 Tim 6:20), and tragically, by their “professing it some have swerved from the faith” (1 Tim 6:21). When teachers or preachers are blinded by pride, they become the blind leading the blind. 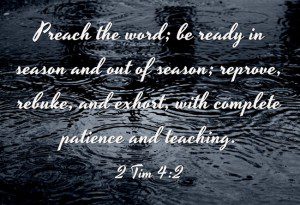 First Timothy 4:1-3 says, “The Spirit expressly says that in later times some will depart from the faith by devoting themselves to deceitful spirits and teachings of demons, through the insincerity of liars whose consciences are seared” (1 Tim 4:1-2), including adding works to salvation (1 Tim 4:3). Paul tells Timothy he must be “trained in the words of the faith and of the good doctrine that you have followed” (1 Tim 4:6), but “Have nothing to do with irreverent, silly myths. Rather train yourself for godliness” (1 Tim 4:7). This is why Paul advised Timothy to “Keep a close watch on yourself and on the teaching” (1 Tim 4:16a). Elders or church leaders are not above correction from the church. First Timothy 5:19-20 says, “Do not admit a charge against an elder except on the evidence of two or three witnesses. As for those who persist in sin, rebuke them in the presence of all, so that the rest may stand in fear.” It seemed apparent that some of the elders were in need of public rebuke. If you look at the church at Ephesus and Corinth, their problems were related to poor leadership, and this caused division.

Paul instructed Titus, who was ministering on the isle of Crete, that he must “appoint elders in every town as I directed you” (Titus 1:5). This church needed elders because it was new. Church growth had outstripped leadership, but by the time Paul gave Titus instructions, he knew exactly how to select them, and these instructions are very similar to 1 Timothy 3, and like that chapter, Paul tells Titus that an elder must be “above reproach, the husband of one wife, and his children are believers and not open to the charge of debauchery or insubordination. For an overseer, as God’s steward, must be above reproach. He must not be arrogant or quick-tempered or a drunkard or violent or greedy for gain” (Titus 1:6-7). Even after all this, Titus and Timothy’s task was not over because they had to ensure that the elders were qualified according to God’s standards (1 Tim. 3:2-7) and in their moral conduct (1 Tim 3:1-13), but they were always to “Keep a close watch on yourself and on the teaching” (1 Tim 4:16a). God will hold church leadership accountable for how they ran Jesus’ church. Each will stand before Him and give an account on what they did (sins of commission) and what they didn’t do (sins of omission). Jesus is the Head of the Church and He expects the Body to cooperate, but the Body can more easily cooperate when church leadership is sound; in teaching sound doctrine and in living a life above reproach.

Jack Wellman is Pastor of the Mulvane Brethren Church in Mulvane Kansas. Jack is a writer at Christian Quotes and also the Senior Writer at What Christians Want To Know whose mission is to equip, encourage, and energize Christians and to address questions about the believer’s daily walk with God and the Bible. You can follow Jack on Christian Crier or check out his book Teaching Children the Gospel available on Amazon.