Does The Bible Say Anything About Guns Or Gun Rights?

Does The Bible Say Anything About Guns Or Gun Rights? October 12, 2015 Jack Wellman

The Right to Bear Arms

Every American citizen has the legal right to bear arms or own a gun or more than one gun. Convicted felons may have a more difficult time but for most citizens, it’s okay to legally own a firearm. It’s in the U.S. Constitution as the Second Amendment. In the very first murder we see that no gun was involved. Cain killed Abel (Gen 4:8) proving it isn’t the weapon that is used; it is in the heart where murder begins. It’s not a gun issue; it’s an issue of the heart. A gun never killed anyone; it was always someone pulling the trigger. Drunk drivers kill a lot of people every year but do we say, “We need to get rid of cars because they keep killing people.” No, it’s the person behind the wheel that kills; not the car. There is no reason that we should not have a way of protecting ourselves. The police and sheriff carry guns and are fully aware that “Whoever sheds the blood of man, by man shall his blood be shed” even though they might not agree that “God made man in his own image” (Gen 9:6). What I mean by that is that the police or sheriff will use deadly force against someone who’s taking lives and thus, “the wickedness of the wicked shall be upon himself” (Ezk 18:20c). Life is sacred since we are made in the image of God and since God is the Author of Life (Acts 3:15) only He can take it. No human has that right outside of defending one’s own life or in defending others. 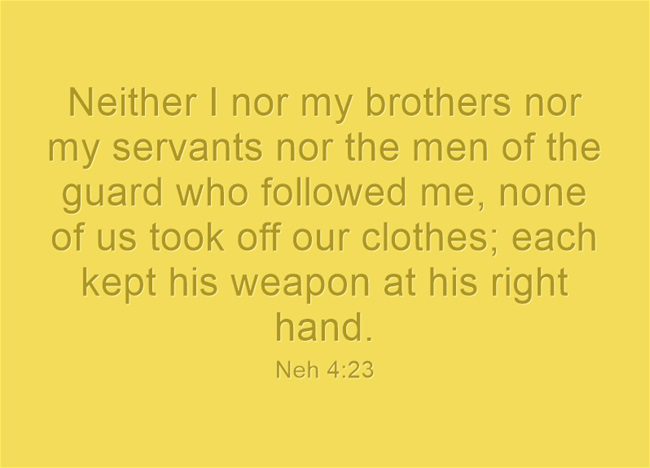 Living and dying by the Sword

When Jesus was being arrested in the Garden of Gethsemane “Simon Peter, having a sword, drew it and struck the high priest’s servant and cut off his right ear. (The servant’s name was Malchus.) So Jesus said to Peter, “Put your sword into its sheath; shall I not drink the cup that the Father has given me” (John 18:10-11)? Jesus said that this was the cup that His Father gave Him so Peter was not to resist the authorities. Something changes when Jesus was about to go to the cross. Before, “Jesus asked them, “When I sent you without purse, bag or sandals, did you lack anything” (Luke 22:35a) and the disciples replied “Nothing,” (Luke 22:35b) but earlier Jesus said “if you have a purse, take it, and also a bag; and if you don’t have a sword, sell your cloak and buy one” (Luke 22:36). Peter showed Jesus two swords and the Lord said “It is enough” (Luke 22:38b). What changed? Perhaps Jesus was looking beyond the cross when many would try to kill Jesus’ disciples and tried they did. Jesus warned the disciples that they would be hated for His sake and taken before the authorities, and some of them killed and it happened just as He said “Then you will be handed over to be persecuted and put to death, and you will be hated by all nations because of me” (Matt 24:9). Many times, Paul barely escaped with his life, even being thought dead once. They would need to defend themselves in taking the gospel into the whole world because they would face thieves, bandits, roving parties, and even the Jews who were jealous of the disciples.

The following Bible verse has seemed to have some controversy connected with it because it concerns what happens when someone breaks and enters into someone’s home at night and whether that person can legally defend themselves or not. Exodus 2:2-3 says “If a thief is found breaking in and is struck so that he dies, there shall be no bloodguilt for him, but if the sun has risen on him, there shall be bloodguilt for him. He shall surely pay. If he has nothing, then he shall be sold for his theft.” This seems to be saying it’s okay to defend oneself at night because we can’t see who the intruder is and don’t know what their intentions are toward us or our family so we can defend ourselves in this case. If it’s daylight, there may be accommodations to the law since they can now see the intruder and see who it is, if they are a real threat to the family, or just someone who’s starving trying to steal a loaf of bread.

When Nehemiah was having the walls of Jerusalem rebuilt, they had enemies trying to discourage and subvert the work, even threatening the workers so Nehemiah ensured that “neither I nor my brothers nor my servants nor the men of the guard who followed me, none of us took off our clothes; each kept his weapon at his right hand” (Neh 4:23). They had every reason to bear arms and every right to defend themselves in the rebuilding of the walls since they had King Artaxerxes’ permission (Neh 2). Having the workers surrounded by security forces, they were able to successfully complete the rebuilding of the walls of Jerusalem, amazingly, “in fifty-two days” (Neh 6:15)! Having the deterrent of force or a strong show of force made the enemy hesitant to invade and stop the rebuilding project. This doesn’t mean that we ever take justice into our own hands because Paul writes “Beloved, never avenge yourselves, but leave it to the wrath of God, for it is written, “Vengeance is mine, I will repay, says the Lord” (Rom 12:19).

Since we are to obey those who are in governing authority over us (Rom 13) we have every right and every reason to bear arms and protect ourselves and our families if needed. I am not saying “It’s shoot to kill” for someone breaking and entering because nothing is valuable enough to compare to a human life. Defending oneself by using force should always be the last resort but often it is the last resort, therefore I believe from the Bible verses that I have read, there is nothing wrong with owning a gun or guns. Just as long as they are used for defense alone, they should be at the disposal of every American citizen.

October 12, 2015
Top 6 Bible Verses About Debt And Being In Debt
Next Post

October 13, 2015 Top 7 Bible Verses About Putting The Past Behind You
Recent Comments
22 Comments | Leave a Comment
Browse Our Archives
get the latest from
Evangelical
Sign up for our newsletter
POPULAR AT PATHEOS Evangelical
1