Top 6 Bible Verses About Debt And Being In Debt

Top 6 Bible Verses About Debt And Being In Debt October 12, 2015 Jack Wellman

Here are six Bible verses about being in debt.

Proverbs 22:7 “The rich rules over the poor, and the borrower is the slave of the lender.”

When Solomon wrote this it wasn’t as prevalent then as it is today. The discrepancies between the rich and the poor have never been greater in the world and the rich do rule over the poor; the poor generally work for the rich and make them rich, but at their own expense. As far as borrowing, the borrower is the slave of the lender so is it worth being enslaved by debt over a certain number of years, whatever it is you want to buy?

Luke 14:28 “For which of you, desiring to build a tower, does not first sit down and count the cost, whether he has enough to complete it?”

Years ago, one of my neighbors started a project; a two bay carport. The problem was he estimated the expense incorrectly and suffered as a result. He did finish the carport but it only had half the top covered. A year later he had enough to complete it but it would have been very easy for me to do the same thing and not sit down and properly assess whether I have the resources to do something or not. If you start something and can’t complete it, you’ve wasted a lot of resources, time, and energy, possibly for nothing.

Romans 8:13 “Owe no one anything, except to love each other, for the one who loves another has fulfilled the law.”

This was excellent advice in Paul’s day and it is still just as good today. Staying out of debt is hard if you are already in debt. It seems that the deeper you go the harder it is to dig out of it so try to owe nothing with the realization that we all have to purchase homes and vehicles. The only thing Paul sees that we should owe anyone is our love and by loving one another we are fulfilling the law. 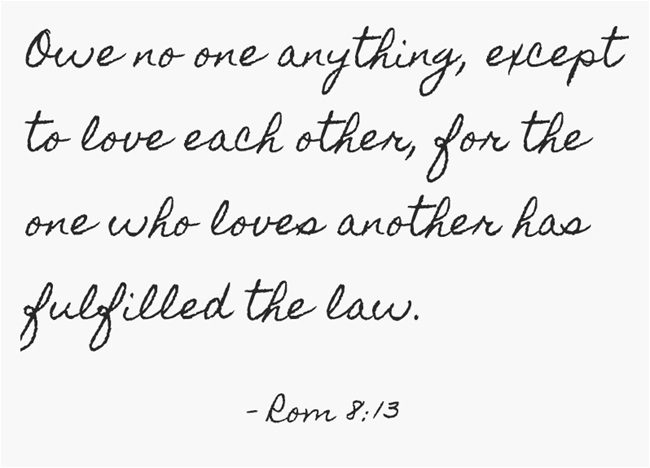 Romans 13:7 “Pay to all what is owed to them: taxes to whom taxes are owed, revenue to whom revenue is owed, respect to whom respect is owed, honor to whom honor is owed.”

Sometimes we have the local paper display the names and delinquent taxes that they owe for their property. This type of debt can be paid off but it can lead to eviction and having your home sold if the debt gets to be too great. When some people bought their homes years ago the economy was good and work was plenty and the mortgage rates were low. This caused people to buy bigger houses and in some cases, bigger than they needed it. When the economy fell years later a lot of people began to struggle with making their mortgage payments. That’s a very hard place to be.

Proverbs 22:26 “Be not one of those who give pledges, who put up security for debts.”

I remember hesitating on signing for a loan because I had doubts about the person’s ability to make the payments. He wasn’t working at the time and he also had a history of joblessness and this concerned me. Solomon’s wise advice here is to not be of those who make pledges and put up their own security for another or even yourself. These two are always a bad idea in almost every case.

Exodus 22:25-27 “If you lend money to any of my people with you who is poor, you shall not be like a moneylender to him, and you shall not exact interest from him. If ever you take your neighbor’s cloak in pledge, you shall return it to him before the sun goes down, for that is his only covering, and it is his cloak for his body; in what else shall he sleep? And if he cries to me, I will hear, for I am compassionate.”

God directly states that lending to the poor simply to make money off of them is sinful. Even if a neighbor had to use his cloak for collateral, at least the man should have it back to sleep with because most of the times, that was the only blanket they had. If he cries out from the cold to God then God says “I will hear.” That sounds like a warning. Jesus said “And if anyone would sue you and take your tunic, let him have your cloak as well” (Matt 5:40) and also said, “Give to the one who begs from you, and do not refuse the one who would borrow from you” (Matt 5:42).

The Bible has a lot to say about staying out of debt and being in debt and it’s not good. We would all have happier lives and be more free of debt if we could learn to live with less but that’s easy to say and hard to do, for me included.