Here are 10 good Christmas trivia questions and answers for you to use.

Was Christmas observance ever illegal?

Yes it was. In England, Christmas was banned for a time by the Puritan Oliver Cromwell in 1649 who outlawed both Christmas carols and Christmas celebrations. This ban lasted until 1660. Even in the Colonies, it was illegal in Boston to observe Christmas from 1659 to 1681.

There were three wise men or magi? True or False?

False. The Bible doesn’t tell us how many wise men or magi came to bring gifts to Jesus. The Bible only tells us that they brought three different kinds of gifts and those gifts had special meaning (Matt 2:1-11). The gold was a customary offering or gift when visiting a king. The frankincense was burned in worship service as a fragrant pleasing to God and represented prayer but also worshiping God. The myrrh came from Arabia and was typically used in burials but sometimes it was mixed with wine and offered to those being crucified.

Did Christmas carols originate in churches?

No, Christmas carols were always sang outside and never sang inside the church until the 13th century when St. Francis of Assisi introduced the idea of bringing them into the church as part of the worship services.

No, there is not Bible verse anywhere that says angels sing. They rejoice, they shout, and they speak, but never does it say they sing. 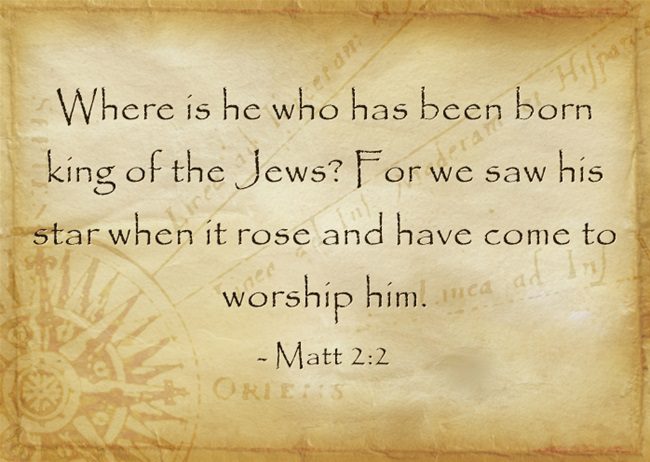 What does the word “noel” have to do with Christmas?

The word “noel” is derived from the French saying “Les bonnes nouvelles” and means “the good news” so the first noel was the good news of Jesus Christ being born as a King and later, becomes our Savior.

Who had the first Christmas tree?

According to church legend, Martin Luther (1483-1546) was so moved by the beauty of the stars shining between the branches of a fir tree that he brought home an evergreen tree and decorated it with candles to share the image with his children, so was he the first person to decorate a Christmas tree? No, we have no proof of that. Nobody knows who the first to use a Christmas tree was but it may have been the Germans who made the first artificial Christmas trees out of dyed goose feathers.

Was Jesus was born in a barn or stable?

Neither; the best biblical scholarship says that Jesus was probably in a cave where they also kept the animals at night.

Was Jesus born in December?

Even though Pope Julius I chose December 25 for the Feast of the Nativity, it seems improbable that Jesus was born in December, particularly on the 25th. When the shepherds heard the announcement of Jesus’ birth from the angels, they were still living in the fields as night (Luke 2:8), which would not be a good time of year to tend sheep and on top of that, to be out there in the middle of the night. Bible scholars believe Jesus was born in September and around 5-6 B.C.

What does the holly represent?

Even the world “holiday” is derived from “holy day” so “holly” is rooted in the word “holy.” The Christmas holly decoration represents Christ’s crown of thorns and the red berries, His very own blood.

Did Christmas stop a war?

Yes, Christmas did stop a war. It was World War One and a “Christmas Truce” was declared in 1914 between the British and the Germans. This began when troops on both sides took Christmas Eve off from the war and then began singing Christmas carols. Later, they came out to greet one another and shake hands while some even exchanged cigarettes as gifts.

I hope you can get some enjoyment out of these questions and answers about Christmas. There’s still a lot I don’t know but I do know the most important thing about Christmas. It’s where the Word of God was dwelling with God and becoming flesh (John 1) to live a sinless life to offer Himself as the once-and-for-all sacrifice (Rom 5, 10) for those who have repented and believed. If you believe in Him, you have eternal life (John 3:36a) but if you reject Him, you have the wrath of God abiding on you at this very moment (John 3:36b).

November 27, 2015 What Is A Bible Commentary? Should It Be Used During Bible Study?
Recent Comments
5 Comments | Leave a Comment
Browse Our Archives
get the latest from
Evangelical
Sign up for our newsletter
POPULAR AT PATHEOS Evangelical
1