Why Does The Bible Say To Fear God?

What does it mean that we are to fear God?

If you don’t believe in God you probably don’t fear God but that’s because you don’t know God. Once a person comes to know God and become familiar with His Word, they come to understand what fearing God actually means. It’s not a dread fear of being struck dead out of the blue. For the children of God, the fear of God means we show Him respect since they’ve had a time in their lives when they turned away from their sins and forsook the fleeting pleasures life and then they humbled themselves and turned to Christ and placed their trust in Him. They ran to Him as a refuge from the coming wrath of God upon the unrepentant. The psalmist writes that “In the pride of his face the wicked does not seek him; all his thoughts are, “There is no God” (Psalm 10:4) which he repeats later in Psalm 53:1 in writing “The fool says in his heart, “There is no God.” They are corrupt, doing abominable iniquity; there is none who does good.” The point being; you cannot possibly understand what the true fear of God is until you humble yourself and place your faith in Christ and come to know God.

The Knowledge of the Holy

The Bible teaches from the Old Testament to the New Testament that “The fear of the LORD is the beginning of wisdom, and the knowledge of the Holy One is insight” (Prov 9:10) so apparently that’s the starting point for godly wisdom. The foolish are those who say there is no God but cannot possibly prove that statement to be true (Psalm 14:1) because even the creation demands a Creator just like the car demanded someone like Henry Ford to invent it and build it. The car could not have always existed or just popped into being and it most certainly didn’t just come into being by mere chance, circumstances, and time. That’s what most unbelievers think about the creation and the origin of life, although they do postulate many different theories about it but have no facts to back those theories up. Solomon tells us that we’re to “Trust in the LORD with all your heart, and do not lean on your own understanding” (Prov 3:5), but sadly, those who trust in themselves will never come to an understanding about just how holy God is. Again, you cannot know what fearing God means until you first come to know God and the knowledge of the Holy One comes from the Holy Word, the Bible. 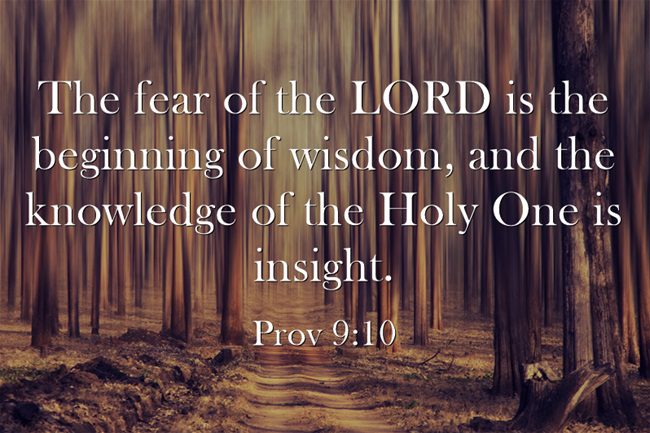 What Fearing the Lord Means

The phrase, “The fear of the Lord is the beginning of wisdom” or knowledge is one of the most frequent teachings of the Bible. When God puts so much emphasis on teachings by placing so many Bible verses about that, then He is saying, “This is very important if you want to have wisdom.” As you have read already, Psalm 9:10 states that “The fear of the LORD is the beginning of wisdom, and the knowledge of the Holy One is insight” but also there are verses very similar to this as in the very first chapter of the Book of Solomon as he writes; “The fear of the LORD is the beginning of knowledge; fools despise wisdom and instruction” (Prov 1:7) and “The fear of the LORD is the beginning of wisdom; all those who practice it have a good understanding. His praise endures forever” (Psalm 111:10). The fact that this is repeated so often means that it’s critical that we know this but this fear of the Lord means we hold a deep, holy, reverential fear and respect for God, for God’s Name, and for God’s Word. I would add we do the same for the members of the church, which is the Body of Christ. To fear God is not to fear punishment if we disobey Him, although that’s a very real possibility, but it means that we seek to please God by living lives of obedience and holiness, at least as much as we can. We are still going to sin (1st John 1:8, 10) and this side of the kingdom, we’ll never be sinless but we should sin less than we did before.

They might not publically acknowledge their fear of God’s judgment because of their pride and their love of sin but deep down inside, they know God exists. They are simply suppressing that knowledge (Rom 1:18). I remember an unbeliever sitting next to me on a jet and we were circling the airport and waiting to land because there were tornadoes nearby and the storms had large hail as well as severe wind shear. As the jet kept circling, other planes began to circle around the airport too, waiting for the tornado warnings to expire. The longer we were in flight, the more other jets were in the area and the lighter our jet became (using up fuel), the more it was tossed right and left and up and down. After this experience, the man next to me asked me about God. I sensed his fear of dying made him fear God’s judgment, knowing that he was living a sinful life (as he acknowledge to me). Unbelievers can only have “a fearful expectation of judgment, and a fury of fire that will consume the adversaries” (Heb 10:27) in near-death experiences and that’s the only fear of God they will ever know unless they repent. In the back of their minds they know that “our ‘God is a consuming fire’” (Heb 12:29) and that after death, they will be judged (Heb 9:27).

The statistics on death are very impressive; ten out of ten will die, but where a person goes after death is a choice we all have to make and we are all responsible for the consequences of our decisions so I plead with you, if you are not saved, to repent today while there is still time (2nd Cor 6:2) and turn to Christ and you will be saved (Rom 10:9-13), but if you reject Jesus, He says to all who do so, “whoever does not obey the Son shall not see life, but the wrath of God remains on him” (John 3:36b).