Genesis 25:30-32 “And Esau said to Jacob, “Let me eat some of that red stew, for I am exhausted!” (Therefore his name was called Edom. Jacob said, “Sell me your birthright now.” Esau said, “I am about to die; of what use is a birthright to me?”

Talk about putting instant gratification over long-term gain, this is it! Jacob came in form a fruitless hunting expedition and he was starving. Instead of waiting to eat something else, he was willing to give his very own birthright for a bowl of stew. How tragic! Had Esau not thought of what he was losing for one simple meal? It is just as the author of Hebrews wrote that it was “Esau, who sold his birthright for a single meal” (Heb 12:16). Of course, Jacob is not without fault; he could have easily seen how tired and hungry Esau was and freely offered him a bowl of stew.

Acts 7:14 “And Joseph sent and summoned Jacob his father and all his kindred, seventy-five persons in all.”

In one of the greatest sermons recorded in the Bible, Stephen gives the story of redemption in one message. Stephen was trying to establish that God gave Abraham “the covenant of circumcision. And so Abraham became the father of Isaac, and circumcised him on the eighth day, and Isaac became the father of Jacob, and Jacob of the twelve patriarchs” (Acts 7:8) and that Jesus descended from the line, and as the Son of David, He is the perfect fulfillment of the Messiah. Stephen told the council, “You stiff-necked people, uncircumcised in heart and ears, you always resist the Holy Spirit. As your fathers did, so do you. Which of the prophets did your fathers not persecute? And they killed those who announced beforehand the coming of the Righteous One, whom you have now betrayed and murdered” (Acts 7:51-52). Stephen was stoned shortly after this, adding his name to those who they murdered.

Genesis 27:36 “Esau said, “Is he not rightly named Jacob? For he has cheated me these two times. He took away my birthright, and behold, now he has taken away my blessing.” Then he said, “Have you not reserved a blessing for me?”

The Bible reveals the biblical characters just as they are; warts and all, and once again, Jacob cheats Esau out of a blessing, so “Now Esau hated Jacob because of the blessing with which his father had blessed him, and Esau said to himself, “The days of mourning for my father are approaching; then I will kill my brother Jacob” (Gen 27:41). Jacob had to run for his life as part of the consequences (Gen 27:43). 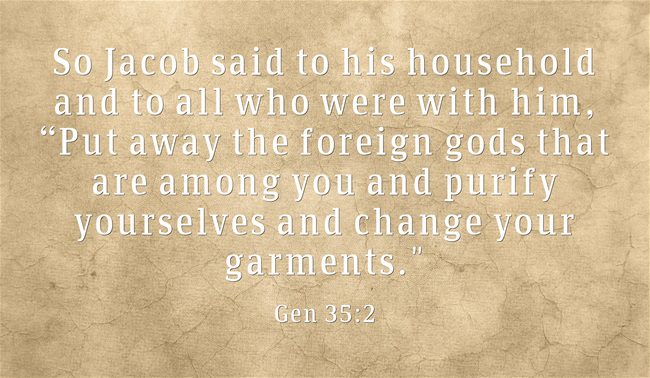 Genesis 37:3-4 “Now Israel loved Joseph more than any other of his sons, because he was the son of his old age. And he made him a robe of many colors. But when his brothers saw that their father loved him more than all his brothers, they hated him and could not speak peacefully to him.”

Israel is Jacob. God later changed Jacob’s name to Israel and was no longer seen as a supplanter or deceiver, but as one which “God prevails,” which is what the Hebrew word “Yisra’el” means. The prophets sometime use Jacob’s name when they are writing about Israel (Isaiah 41:14).

Isaiah 41:14 “Fear not, you worm Jacob, you men of Israel! I am the one who helps you, declares the Lord; your Redeemer is the Holy One of Israel.”

God certainly chose Israel as a people for Himself but they fell into idolatry, time after time, and so God lovingly disciplines them through captivity because they’re hearts were so hard that they completely ignored the laws of God. God calls them a worm, compared to His mighty majesty, but He still claims them as His own people and as their Redeemer, Who “is the Holy One of Israel.” That Redeemer lives and His name is Jesus Christ.

Genesis 32:25 “When the man saw that he did not prevail against Jacob, he touched his hip socket, and Jacob’s hip was put out of joint as he wrestled with him.”

This was actually God in human form, wrestling with Jacob. He wasn’t wrestling Jacob to find out how strong he was but to see how persistent he would be. He was persistent, to be sure because even after the “man” touched Jacob’s hip, “Jacob said, “I will not let you go unless you bless me” (Gen 32:26). This explains why Jacob’s name was changed as the man says, “Your name shall no longer be called Jacob, but Israel, for you have striven with God and with men, and have prevailed” (Gen 32:28). Israel means, as you have read earlier, “God prevails.”

Genesis 35:2 “So Jacob said to his household and to all who were with him, “Put away the foreign gods that are among you and purify yourselves and change your garments.”

This was a time where Jacob was very worried about the lands inhabitants who lived around them and that they might join their forces together after Simeon and Levi had taken the law into their own hands and avenged their sister’s being defiled. This is why Jacob said, “You have brought trouble on me by making me stink to the inhabitants of the land, the Canaanites and the Perizzites. My numbers are few, and if they gather themselves against me and attack me, I shall be destroyed, both I and my household” (Gen 34:30). Later, “they gave to Jacob all the foreign gods that they had, and the rings that were in their ears. Jacob hid them under the terebinth tree that was near Shechem” (Gen 35:4). That’s not a good sign. Instead of destroying their foreign gods, they hide them, expecting to retrieve them again after the trouble had passed.

Today, many non-believers are casting stones at believers because of their hardness of heart. It will take God the Holy Spirit to circumcise their heart, from a heart of stone, to a heart of flesh. A heart that’s humble and transparent before God. Otherwise, God’s wrath abides on those who refuse to believe (John 3:36b). That wrath abides on those who continue to ridicule this article or other biblical articles that proclaim Jesus as the Son of God and the one and only way to be saved (Acts 4:12).

May 18, 2016 Top 7 Bible Verses About Peter
Recent Comments
1 Comment | Leave a Comment
Browse Our Archives
get the latest from
Evangelical
Sign up for our newsletter
POPULAR AT PATHEOS Evangelical
1