Top 7 Bible Verses About Self Defense

Here are seven Bible verses that relate to self-defense.

This Old Testament law shows that we can defend ourselves in our own home and using force under such circumstances is just and fair. Even if they steal something and have nothing with which to repay, the thief who broke and entered must pay for the crime be being sold for whatever he sold but with the understanding that he or she’s not to be s slave forever but only until the amount stolen is covered. This is a law about restitution for the victims of thievery.

Romans chapter 13 is all about the command to follow man’s laws, at least where they don’t contradict the laws of God (Act 5:29). Law enforcement authorities must defend themselves or risk being killed. Those who God sovereignly appoints as authorities are those who represent God Himself since “whoever resists the authorities resists what God has appointed, and those who resist will incur judgment” (Rom 13:2).

Why does Jesus tell His disciples to take a sword with them? Remember the Parable of the Good Samaritan? This shows that we live in a dangerous world and even then, thieves and robbers were always on the lookout for someone to rob. It is permissible to defend oneself. 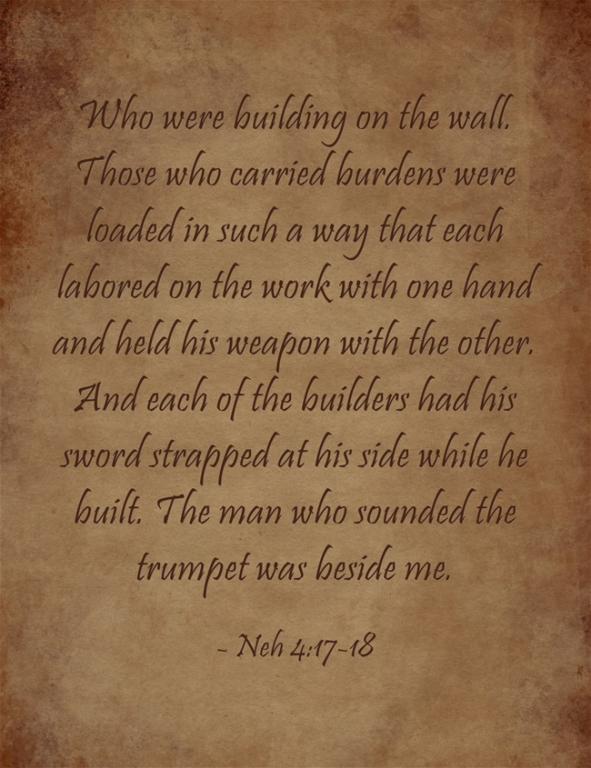 Proverbs 25:26 “Like a muddied spring or a polluted fountain is a righteous man who gives way before the wicked.”

This is a rebuke to those who see injustice and do nothing about it. They don’t want to get involved because there are all those police reports to fill out and they might even have to testify in court. For these reasons, many don’t want to get involved, but for the believer, we cannot give way to the wicked or the wicked will do even worse things. A righteous man or woman who does nothing against the wicked and yields to their actions and their deeds is simply condoning their wicked acts.

Nehemiah 4:17-18 “Who were building on the wall. Those who carried burdens were loaded in such a way that each labored on the work with one hand and held his weapon with the other. And each of the builders had his sword strapped at his side while he built. The man who sounded the trumpet was beside me.”

When Nehemiah was rebuilding the walls of Jerusalem, there were threats to the workers safety so Nehemiah wisely arms the builders so that if a sudden attack comes, they can defend themselves. God was behind this rebuilding project and so we can safely assume from Nehemiah’s instructs to carry a sword with them that God gave them permission to defend themselves but to also keep the work going, no matter who threatened them.

Psalm 82:4 “Rescue the weak and the needy; deliver them from the hand of the wicked.”

This is a call to action to rescue the weak that cannot defend themselves and to help the needy who cannot survive without someone else’s assistance. God instructs us to deliver the most vulnerable in society from those who would take advantage of the weak. To let the wicked take advantage of the weak and do nothing about it is seen as sin to God.

Romans 12:19 “Beloved, never avenge yourselves, but leave it to the wrath of God, for it is written, “Vengeance is mine, I will repay, says the Lord.”

Sometimes we cannot defend ourselves so we must trust law enforcement to take care of it. We make poor vigilantes and it’s better to trust God in all this than to try and get revenge ourselves. The Bible teaches that “will give an account of himself to God” (Rom 14:12) since “the Son of Man is going to come with his angels in the glory of his Father, and then he will repay each person according to what he has done” (Matt 16:27).

The controversy about gun laws today is either one extreme or the other, but we know that the law allows us to defend ourselves, especially if our life or our family’s lives are in jeopardy. There are ways we can prevent ourselves from being put in a position of having to defend ourselves. We can make sure we have well-lite entrances, we can have secure locks on our doors and windows, and we can call 911 when we are threatened by an invader. God has placed those in authority for our own benefit and we are better off informing the authorities than trying to take the law into our own hands, although if necessary, we can certainly defend ourselves and our family and friends if our lives are at stake.

June 29, 2016 What Does The Bible Say About Streets of Gold?
Recent Comments
7 Comments | Leave a Comment
Browse Our Archives
get the latest from
Christian Crier
Sign up for our newsletter
POPULAR AT PATHEOS Evangelical
1