Top 7 Bible Verses About Speaking Up

Here are seven Bible verses referring to speaking up when needed.

Romans 1:16 “For I am not ashamed of the gospel, for it is the power of God for salvation to everyone who believes, to the Jew first and also to the Greek.”

There is a time to speak and a time to be silent but we must never be silent when we’re speaking about the gospel. If you had the cure for a deadly disease and you kept it to yourself, that’s almost like negligent homicide for those who have the disease. We have the cure for the wrath of God that sin had brought upon us, so we must share this very good news. Trust the power that’s in the gospel and don’t’ be silent for it’s the power to save, or as the Apostle Paul puts it, “the word of the cross is folly to those who are perishing, but to us who are being saved it is the power of God” (1st Cor 1:18).

First Peter 3:15-16 “But in your hearts honor Christ the Lord as holy, always being prepared to make a defense to anyone who asks you for a reason for the hope that is in you; yet do it with gentleness and respect, having a good conscience, so that, when you are slandered, those who revile your good behavior in Christ may be put to shame.”

When someone asks you about the joy you have, you can say that you have been saved and Jesus has given you His joy but also His peace and this peace will remain forever. Just prior to Jesus going to the cross to suffer and die and then return to the Father, the disciples were very anxious so Jesus speaks to them and says, “Peace I leave with you; my peace I give to you. Not as the world gives do I give to you. Let not your hearts be troubled, neither let them be afraid” (John 14:27).

Galatians 6:1 “Brothers, if anyone is caught in any transgression, you who are spiritual should restore him in a spirit of gentleness. Keep watch on yourself, lest you too be tempted.”

When you see a brother or sister living in sin, obviously we must speak up, but here, Paul writes as if someone’s been caught in the act and so “if anyone is caught in any transgression” you should restore them in a gentle way and not harshly or judgmentally because we too can be tempted to do the very same thing. There is nothing here that suggests that we bring this to the attention of others…better to keep it between you and your brother or sister, but by all means, do speak up but do it in love. 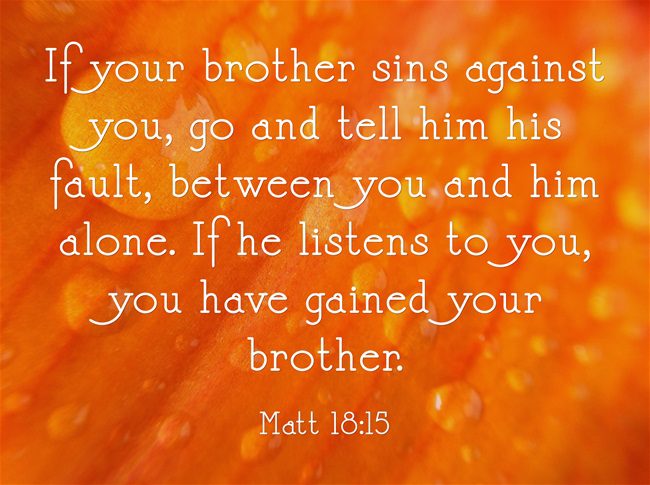 First John 5:16 “If anyone sees his brother committing a sin not leading to death, he shall ask, and God will give him life—to those who commit sins that do not lead to death. There is sin that leads to death; I do not say that one should pray for that.”

This Bible verse has troubled many a Christian because they do not know what sin it is that leads to death. Is it a sin that’s un-repented of? Is it a besetting sin that the believer just can’t overcome? At least we know that the Apostle John says if we see a brother or sister committing a sin not leading to death, we should go to them in the hope that they will repent. Either way, we must speak up as some sins do lead to death, at least a physical death but some do not. Obviously sexual immorality is one of the most grievous sins and John may have had that in mind when he wrote this.

Matthew 18:15 “If your brother sins against you, go and tell him his fault, between you and him alone. If he listens to you, you have gained your brother.”

This is clearly Jesus teaching the disciples about church discipline and we must speak up with a believer sins against us or the church but we first go to them and speak to them in private (“you and him alone”) in the hopes they’ll listen, but if not, we bring another witness or two and if this still doesn’t work, bring it before the church (Matt 18:16-17). Sin must be dealt with and no one should be allowed to openly sin in the church. If they do, speak up.

Proverbs 27:6 “Faithful are the wounds of a friend; profuse are the kisses of an enemy.”

I would rather have a friend tell me that I am wrong instead of being wrong. In other words, I’d rather be corrected than incorrect. Our friends should love us enough to tell us the truth and speak up when we’re in the wrong. This is so much better than living in error while your enemies pour out accolades upon you.

Ephesians 5:11 “Take no part in the unfruitful works of darkness, but instead expose them.”

The Apostle Paul wants all of us to expose error when we see it and this obviously means we speak up and expose those who are teaching error. We’re not to have anything to do with them except to warn others of the heretical or false teaching because to remain silent is to condone this error, so there is a time to speak up, especially when it comes to exposing apostasy.

The most important time of all to speak up is when you want to be saved and you desire to “confess with your mouth that Jesus is Lord and believe in your heart that God raised him from the dead, you will be saved” (Rom 10:9). By all means, don’t be silent about it or procrastinate, because we’re not even guaranteed tomorrow but we are guaranteed a day of judgment after our appointment with death comes.

June 29, 2016 Top 7 Bible Verses About Shyness
Recent Comments
0 | Leave a Comment
Browse Our Archives
get the latest from
Christian Crier
Sign up for our newsletter
POPULAR AT PATHEOS Evangelical
1