Here are seven Bible verses relating to the elderly or the “gray haired” ones.

Leviticus 19:32 “You shall stand up before the gray head and honor the face of an old man, and you shall fear your God: I am the LORD.”

This is a passing art in America, but not so in other parts of the world. Many cultures value the aged because they were taught to respect their elders and stand up (rise) when they entered the room. The same courtesy used to apply for women, and still does in some places, but that too seems to have passed with time. The crux of this verse is that we should not only honor one another, but even more, we should honor the older man and woman who are in our presence. God says “honor the face of an old man” and woman and you do that by standing up when they enter the room. Moses added the fact you must fear God. He did not mean having the fear of being struck dead at any moment, but a fear that shows a deep, abiding, holy, and reverential respect for God. Naturally, that includes respect for His Word, the Bible because you cannot separate the Word of God from the God of the Word.

Certainly neither I nor you are getting any younger; day by day our strength is slipping away, but not so for the young and woman for their strength gives them glory…at least for a time because time catch up with them as it has the aged. Here’s the way to look at is each gray hair someone has; it’s a hard time in life where a valuable lesson was learnt, and by the time they are older, they’ve gained enough wisdom through experience to stop repeating the same mistakes over and over. I told my son once that for each gray hair I have today was one of those days when you were having, “One of those days!” In time, that wisdom is worn like a crown for men and women. Would this give more reason to stand up when an older man or woman enters the room?

Proverbs 16:31 “Gray hair is a crown of glory; it is gained in a righteous life.”

Solomon must have read Leviticus 19:32 as he’s in agreement with the gray-haired people. Gray hair in this world is usually covered up by coloring, but that has to be done over and over again, but the person’s who’s comfortable in their own skin doesn’t care as much as they used to about what people think. Many have said they don’t even think about trying to impress anybody. They are who they are. Notice that the crown of glory was made more glorious by living a more righteous, though not sinless life. Incidentally, the glory that’s coming can’t even be compared to right now (Rom 8:18). 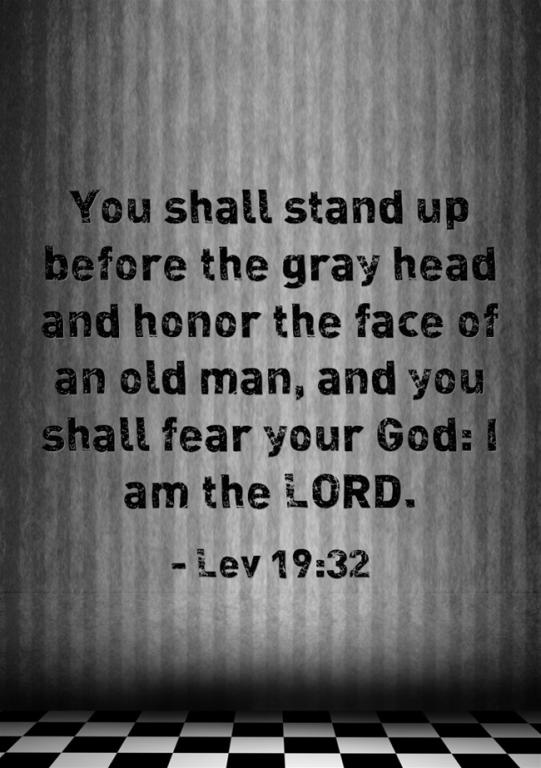 First Timothy 5:1-2 “Do not rebuke an older man but encourage him as you would a father, younger men as brothers, older women as mothers, younger women as sisters, in all purity.”

This verse clearly speaks about showing respect to an older woman or man. If someone rebuked your parents in public, especially by someone younger than they, you’d be angry, right? No woman or man, young or old, should be verbally abused in public or private, especially by their own children or someone younger than them. The only exception would be when someone could get hurt, including themselves or you. Aside from that, we should treat older women and men as we should treat our mothers and fathers, and younger sisters and brothers just like family.

Psalm 71:18 “So even to old age and gray hairs, O God, do not forsake me, until I proclaim your might to another generation, your power to all those to come.”

The fact that there are so many Bible verses referring to gray hair shows how important it is to God to respect our elders. When we don’t, we clearly don’t respect God’s Word because we’re told to respect and honor older women and men. King David was so concerned that God might forsake him in his old age that he put it in song (Psalm 78). Perhaps in David’s old age he was worried that he might start losing his grip on reality and God would forget about him. The biblical account shows that God never did forsake King David and neither will He forsake you if you’ve repented and trusted in Christ.

Isaiah 46:4 “Even to your old age I am he, and to gray hairs I will carry you. I have made, and I will bear; I will carry and will save.”

In a verse that shows the tenderness of God, He reassures Israel that when they are old, God will not forsake them, even if God has to carry them Himself in their old age. He will even bear them in His arms, but in the end, He will save them. David wrote something that many of the Israelites might have been thinking, like, “Do not cast me off in the time of old age; forsake me not when my strength is spent” (Psalm 71:9), so this word from Isaiah probably gave them some comfort (carrying you) and reassurance (save).

First Kings 12:13-14 “And the king answered the people harshly, and forsaking the counsel that the old men had given him, he spoke to them according to the counsel of the young men, saying, “My father made your yoke heavy, but I will add to your yoke. My father disciplined you with whips, but I will discipline you with scorpions.”

After the passing of King Solomon, his son Rehoboam sought the counsel of the older men of experience. He also counseled with “the young men who had grown up with him and stood before him” (1st Kings 12:8), and wouldn’t you know it, he took his younger friends counsel over that of the elders, partly I believe because of his pride. Of course it was in the best interests of Rehoboam’s younger friends to want to increase the tax. His friends stood to gain from that, so the king was harsh and forsook the counsel of the elders and increased the tax burden on Israel and by doing so, he caused the nation to divide into two separate nations; the Northern Kingdom (Israel) and the Southern Kingdom (Judah). Don’t you wander whether Israel would’ve still split in two if Rehoboam would have listened to his father’s older counselors?

I believe this is why counseling is so important. For example premarital counseling can help the couple go into a marriage with realistic expectations and try to resolve any issues before they get married. The counselor seeks to reconcile all differences before the wedding takes place. Someone who’s more experienced may be more likely to be helpful, so if you have a mentor, which is typically an older man or woman, then trust what they say, listen to their experiences, and maybe you’ll have less gray hair than they do by the time you get to be their age. 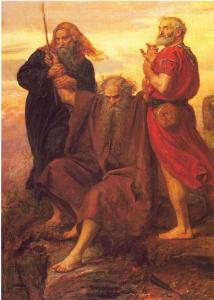