What Does It Mean To “Abstain From The Appearance Of Evil?”

Christians are to avoid evil, but what about even the appearance of evil? What does this mean?

Who among us who believe in Christ have not been tempted? Even Jesus Christ was tempted in the wilderness, and so we are no exception to the fact that we are going to be tempted, however, we can’t blame the devil or demons because we are all responsible for our own actions and the consequences of those actions. So how does temptation lead us into sin? James writes, “Let no one say when he is tempted, “I am being tempted by God,” for God cannot be tempted with evil, and he himself tempts no one. But each person is tempted when he is lured and enticed by his own desire. Then desire when it has conceived gives birth to sin, and sin when it is fully grown brings forth death” (James 1:13-15). The point is if we allow the temptation to linger and don’t resist it, then we might embrace it and fall into sin as we’re lead away by our own lusts, meaning there is human responsibility for sin and we can’t point fingers at God or the Devil or his demons when we sin. James gives us the “How to” in resisting the Devil by writing, “Submit yourselves therefore to God. Resist the devil, and he will flee from you” (James 4:7). First of all, if we submit to God, we are being submissive to God or obeying the commands He has given us. If we do that, and then resist the Devil, he must “flee from you” because Satan can’t tempt a Christian as easily who is living in obedience. 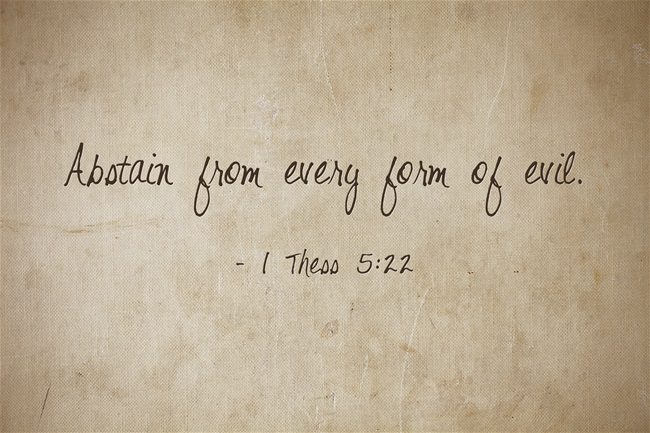 When the Apostle Paul was giving a description of what the Christian should be living like, he included the command to “admonish the unruly, encourage the fainthearted, help the weak, be patient with everyone. See that no one repays another with evil for evil, but always seek after that which is good for one another and for all people. Rejoice always; pray without ceasing; in everything give thanks; for this is God’s will for you in Christ Jesus. Do not quench the Spirit; do not despise prophetic utterances. But examine everything carefully; hold fast to that which is good” (1st Thess 5:14-21). The is almost like a job description for an employee, but in this case, we’re in the family of God and we’re told to not repay evil for evil; to seek the good of one another, to constantly rejoice, pray without ceasing, and be thankful for everything. This is why Paul says “this is God’s will for you in Jesus Christ.” We don’t have to guess about God’s will as it’s clearly revealed in Scripture, but more so, we are to “examine everything carefully” and then “hold fast to that which is good.” If we do these things, we are in the will of God and we’ll not even be giving the appearance of evil.

The Appearance of Evil

We had a couple who claimed to be Christian who lived a couple of houses down from us and they were both unmarried but living together. This is next to nothing in the world’s eyes, but when someone claims to know Christ but doesn’t obey Christ, their witness for Christ is tarnished and their witness is of no effect. Even more, it does more harm than good to claim to be a believer when the world around them sees that they are living no differently than they do. The couple once asked me, “Do you think it is sin to live together without being married?” I told them that my own opinion isn’t important. It’s what the Bible says that’s important and the Bible says we are to “Abstain from every form of evil” (1st Thess 5:22). What Paul is saying is if it even looks like sin to the world, don’t do it. We must abstain from evil, but we must also abstain from giving the appearance of evil because that destroys our testimony of Christ. It shows that since Christians can compromise with sin, it must not be that serious. They may not say that with words, but their actions show that. Why should we be a stumbling block for non-believers when we can be salt and light? Even though the couple told me they never had sex, how convincing are their lives to the neighbors and those who know them? Not very, I would argue. It isn’t just pastors who are to live above reproach (1st Tim 3:2). There isn’t a set of rules for pastors and then another set for lay-members to live by. If we give the appearance of evil, we tell the world that it’s okay to sin. Even if there is no sin, the appearance of doing evil is just as bad because the human imagination tends to fill in the blanks and makes assumptions. Yes, it’s wrong to judge by sight, but if we cause our brother or sister to stumble even by giving the appearance of what we’re doing is sinful, we are sinning. The world is watching…and we might be the only Bible they will ever read…and if we ruin our witness for Christ, then they might think (incorrectly) that all Christians are like that…just a bunch of hypocrites. Yes, we are in some ways, but I would say, so is everyone else. The difference is, we admit it and know we’re not perfect…we’re infused with the righteousness of Christ (2nd Cor 5:21).

I think the couple knew something was wrong, otherwise, why would they even care what someone thought about their living together? If they had no problem with it, they would have never even brought it up, so the fact that they asked about this shows me that they know something might be wrong with what they’re doing. They told me they don’t have sex but how can the neighbors know that? What does this say to the world? How can Christians live like the world and still claim to be Christ’s? The Apostle John warns, “it is evident who are the children of God, and who are the children of the devil: whoever does not practice righteousness is not of God, nor is the one who does not love his brother” (1st John 3:10), because “Whoever keeps his commandments abides in God, and God in him. And by this we know that he abides in us, by the Spirit whom he has given us” (1st John 3:24), and the truth is, “No one who abides in him keeps on sinning; no one who keeps on sinning has either seen him or known him” (1st John 3:6), no matter how they justify themselves. Cleary, “No one born of God makes a practice of sinning, for God’s seed abides in him; and he cannot keep on sinning, because he has been born of God” (1st John 3:9), and that means they won’t want to even give the appearance of doing evil, but instead, will do everything they can to live a holy life that is pleasing to God…and not a life that focuses on pleasing themselves.

February 15, 2017
How Can Our Righteousness Exceed That Of The Pharisees?
Next Post