Is America On The Brink Of Financial Disaster?

Is America On The Brink Of Financial Disaster? May 4, 2018 Jack Wellman

With the U.S. debt spiraling out of control, is the U.S. on the brink of a financial catastrophe?

The United States national debt has now reached twenty-one trillion dollars and counting, and counting quickly. You can see for yourself on the U.S. Debt Clock (www.usdebtclock.org/) just how astoundingly fast this debt is piling up. I calculated the rate at which the debt is swelling and it was a stunning $45,000 further in debt every second! That’s right! Count, one-thousand one, and that’s another $45,000 dollars the U.S. is in debt, and the debt doesn’t take a holiday. It keeps that pace 24/7, but the pace has increased rapidly since the last time I checked it a couple of years ago. When you look at the total amount of debt that this nation is in, and I urge you to look at it, it seems utterly hopeless for us to ever break free from it. What I believe its doing is slowly strangling the nation to death. We are bleeding capital like a mortally wounded man, except the color is green. Money is moving…moving out of the nation. It’s as if the nation is dying a slow death, or like being on a sinking ship and more water’s rushing in than we can bail out, and it seems that all our actions to reduce the national debt are nothing more than rearranging chairs on the deck of the Titanic.

The gigantic debt the nation is now under is also swallowing some of its citizens. The average debt for a U.S. citizen is now $213,000 plus, and for families, it’s worse, averaging well over $800,000 in debt. And, the U.S. Debt is not just a paper debt, but debt held by the public, such as Treasury securities held by investors outside the federal government, including those held by private individuals, corporations, but also debt held by government accounts or intragovernmental debts, such as non-marketable Treasury securities. These are held in accounts of programs administered by the federal government. The bad news is, as government debt increases as a result of government spending, trade deficits, and unpaid credit will increase too, and all three of those sectors are spiraling down so quickly that is seems out of control; more specifically, out of our control. It’d be easier to stop the world from spinning and then reverse its direction than to shrink or end the deficit. What happens when the federal government is so financially unsustainable that they’re considered a credit risk? The nation is already a bad credit risk simple because the nation is unable to pay enough of the interest it owes on the debt to contain it. There is simply too much momentum, and the way the system is structured right now, “Mr. Smith” could go to Washington and even he’d be powerless.

US Commerce Secretary Wilbur Ross said Beijing’s new development plan, which is called Made in China 2025, lays out the country’s strategy, and their strategy is to dominate ever single “hot industry,” in the world. This includes space technology, telecommunications, robotics, electric cars, and anything that is “hot” at the moment. Secretary Ross stated that China’s “been the factory floor of the world, now their vision is to be the technology center for the world.” [1] The Secretary’s major worry was about China’s reviewing of US patents. The risk to the world and to the U.S. is China filing these patents in their home country. This will prevent the legitimate owners of the technology from selling their ideas in China. That can only make matters worse for the U.S debt problem, but it certainly won’t help the other nations of the world.

The U.S. Department of Treasury gave its 2017 financial report of the U.S. government, and for the first time in our nation’s history, the federal government is becoming financially unsustainable. In the Treasury Department’s grimmest report ever, released in February on this year, it stated that “the federal debt [will be] somewhere between 74 percent and 95 percent of gross domestic product by 2027.” [2] That’s as upside down as you can get, and presently, there is little hope of ever capping our spending, let alone pay down the debt. Congress is charged with the responsibility of this titanic problem. To do nothing is to “grease the slide.” China presently holds more than $1 trillion in U.S. debt, and as of January, 2018, the total U.S. debt to China was $1.17 trillion. [3] 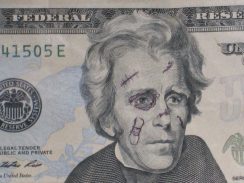 This nation is so financially upside down that it is now ridiculous, and there seems no way we can ever slay the debt giant. It’s like a black hole that threatens to swallow everything in its path, and the more it swallows, the stronger it becomes. It’s already become too big of a giant to handle. If you can think of a solution, let me know, and if you do, call your congressman. Even there, I hold out little hope. My hope is not in man but in Christ alone. I know the days are coming “when the plowman shall overtake the reaper and the treader of grapes him who sows the seed; the mountains shall drip sweet wine, and all the hills shall flow with it” (Amos 9:13)…and they won’t have to import it, or put it on their tab.