Whatever Happened To Integrity?

What’s happened to the subject of integrity? Isn’t it still important?

If we look at the definition of integrity, we can see the importance of such a virtue in society. To have integrity is to be trusted by others. After time, they know from experience that the person can be trusted, based upon their past. Integrity is the practice or habit of being an honest person before others; saying what you mean and meaning what you say; and doing that which was promised but in an honest manner. Having integrity is having a consistent and uncompromising adherence to ethical and moral principles. All of this is based upon honesty and truthfulness, and a person who has integrity is a person that is both honest and truthful in all their dealings with others, no matter how small or large the matter is. Several biblical characters displayed integrity, including Joseph and Daniel, so why is the subject of integrity rarely used these days in Bible studies or in the secular media? Has it now become acceptable since there is widespread corruption? Have we accepted the unacceptable as the norm?

Several years ago, there was a job opening for a Chief Financial Officer for a very large company. The interview went well, and after having met with the Board of Directors, they were unanimous in their endorsement of the man. He was offered the CFO position and accepted it. Now it was time to celebrate, but instead of having a dinner at a fine restaurant, the CEO thought it would be appropriate if they all ate in the company cafeteria. They let the CFO go first in line, and while they were moving down the buffet line, the CEO, standing next in line, noticed that he slid two 10 cent patties of butter under his napkin. After lunch, the CEO talked with the board members about it, and they were unanimous again, only this time they agreed that the company should withdraw the offer. For a measly 20 cents worth of butter, a man lost a job paying over a quarter million dollars, however, if this man wasn’t going to be honest with very little, how could he be trusted with a lot more? Maybe the CEO had thought of Jesus’ teaching: “One who is faithful in a very little is also faithful in much, and one who is dishonest in a very little is also dishonest in much” (Luke 16:10). This particular teaching of Jesus fit this scenario perfectly!

Someone who is faithful is someone who has the quality of being honest and having strong moral principles; a moral uprightness, so a lack of faithfulness can get someone fired. That’s what happened in the account where Jesus taught in the Parable of the Dishonest Manager (Luke 16:1-8). The manager dealt shrewdly with others because he knew he’d be out of a job and in need of some friends, so that’s why Jesus’ concluded this lesson by telling his disciples to “make friends for yourselves by means of unrighteous wealth, so that when it fails they may receive you into the eternal dwellings” (Luke 16:9). The word used for “wealth” is “mammon,” and doesn’t only refer to money, but to possessions, so Jesus’ council is to use your possessions (money, resources, and time) to share Christ, so that when you enter the kingdom, those “friends” will welcome you. That’s because you’re part of the reason they are there! That’s where the “eternal dwellings” are at…not here below.

The job the man had for less than a day, wasn’t even faithful even in the smallest of things. They knew that if he was not going to be honest with such small amounts, there’s no way they could be sure he would be faithful in much more. Jesus’ teaching is perfectly set for this in Luke 16: 10-12, where our Lord says, “One who is faithful in a very little is also faithful in much, and one who is dishonest in a very little is also dishonest in much. If then you have not been faithful in the unrighteous wealth, who will entrust to you the true riches? And if you have not been faithful in that which is another’s, who will give you that which is your own?” Can you blame the CEO for not hiring this man? If we do not have integrity, even in the smallest of things in life, we cannot be trusted in the big things. How can we think God will allow us to have more responsibility in the kingdom, when we’re not being responsible with the little we have today?

Jesus not only gave the Great Commission (Matt 28:18-20), but He also showed what it looks like to serve others. In serving others, they are actually serving Christ. Jesus said, “I was hungry and you gave me food, I was thirsty and you gave me drink, I was a stranger and you welcomed me, I was naked and you clothed me, I was sick and you visited me, I was in prison and you came to me” (Matt 25:35-36), but apparently they were not keeping track of their works. They answered Jesus, “Lord, when did we see you hungry and feed you, or thirsty and give you drink? And when did we see you a stranger and welcome you, or naked and clothe you? And when did we see you sick or in prison and visit you” (Matt 25:37-39). Jesus answered them with the answer of the ages: “Truly, I say to you, as you did it to one of the least of these my brothers, you did it to me” (Matt 25:40). This is why Jesus told them in the beginning, “Come, you who are blessed by my Father, inherit the kingdom prepared for you from the foundation of the world” (Matt 25:34). Their responsibilities and rewards were relative to what they’d done for Christ while in the body. Do you not eagerly desire to hear Jesus say, “Well done, good servant! Because you have been faithful in a very little, you shall have authority over ten cities” (Luke 19:17)? If He can trust you with 20 cents, He can surely trust you with more in the kingdom. 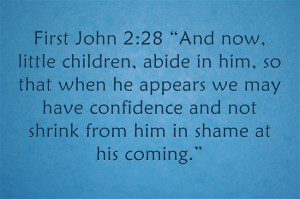 If you read Scripture, it becomes apparent that walking in integrity secures your footing. Proverbs 10:9 says, “Whoever walks in integrity walks securely, but he who makes his ways crooked will be found out,” sounding very much like Numbers 32:23 which says that if “you have sinned against the Lord…be sure your sin will find you out” (Num 32:23). God so values integrity that He says, “Better is a poor man who walks in his integrity than a rich man who is crooked in his ways” (Prov 28:6), and again, “Better is a poor person who walks in his integrity than one who is crooked in speech and is a fool” (Prov 19:1). The sum of all it all is, “The integrity of the upright guides them, but the crookedness of the treacherous destroys them” (Prov 11:3). Notice that walking in integrity secures the path, but the wicked will be found out…much like the almost-CFO, so “nothing is hidden that will not be made manifest, nor is anything secret that will not be known and come to light” (Luke 8:17). Maybe not today…but in time, you can be sure.

Walking in integrity today will have its advantages today, but also into eternity, but how you fare on the day of His appearance will largely depend upon how you are living today. The Apostle John writes, “And now, little children, abide in him, so that when he appears we may have confidence and not shrink from him in shame at his coming” (1 John 2:28). We can walk in integrity and not be ashamed at His appearing, but rejoice at it…but those who refuse to walk in integrity, know for certain; “nothing is hidden that will not be made manifest, nor is anything secret that will not be known and come to light” (Luke 8:17), so “be sure your sin will find you out” (Num 32:23b).

Church Should Be Your Excuse for...
The Chorus In The Chaos
Related posts from Christian Crier