“GET OUT”: Rick Santorum’s Christian Exceptionalism

On March 19th, Rick Santorum was canvassing Louisiana in an attempt to woo voters when he accepted an invitation to speak at Greenwell Springs Baptist Church in Baton Rouge. He was introduced by Pastor Dennis E. Terry who delivered what has since become an infamous sermon as an introduction for Santorum.

There are so many disturbing elements to this video that it’s hard to know where to start. And though it is important to note that Santorum did not say these things, he has had more than a week to condemn them, or at least distance himself from them. He has done neither.  In fact, he joined in the standing ovation that Terry received at the end of his speech, and he also accepted  blessing from the pastor during the same event. 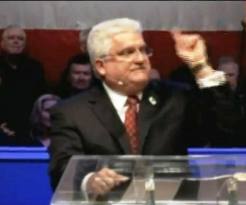 All of this places Santorum in the position of tacitly condoning Pastor Terry’s vitriolic screed, which points precisely to why I called Santorum a “Champion of the Secular Left” in an earlier article. In allying himself with such a rigidly conservative constituency, he now represents these views in the eyes of other Americans. And if the majority of responses I’ve seen from folks across the board to Terry’s sermon, the push-back against this kind of Christianity will be a net-negative for both Santorum and Terry.

The thing is, it doesn’t matter for Terry. In fact, in as much as he perpetuates the evangelical mantra of being martyred in the court of public opinion, the backlash he’s receiving only serves to reinforce that the world is out to get him. But Santorum cannot afford the same kind of broad-based PR damage. He has to appeal to a larger audience, but he’s tied himself to a narrow cross-section of America that could not care less about being accepted in the mainstream.

Politically, this spells nothing but disaster.

As for Terry’s sermon, there are several points that stood out to me, to which I feel like I have to offer a response. Let’s get the most obvious one out of the way first: the “Get Out” statement.

Nuance it however you like, but what Pastor Terry is calling for is ethnic cleansing. Sure, it’s not the Nuremberg style of ethnic cleansing, but it is precisely that. Taking a hard line, staking a claim that this is how “we” do things and offering up all who differ an ultimatum to concede or leave is not far removed from Nazi exceptionalist rhetoric.

I don’t throw that word around casually either. It’s en vogue to label anyone who holds 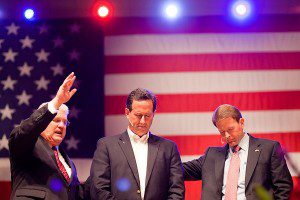 different views than us as a Nazi, and I’m not calling Terrie one. I’m certainly not suggesting Santorum is. But I will stand behind the assertion that the kind of exceptionalist rhetoric Terry offered at Santorum’s rally is entirely consistent with the Nazi approach to separating the sheep from the goats, using their own custom-made criteria, of course.

I won’t even bother to dissect Terry’s positions on things like abortion, homosexuality or the preservation of traditional marriage, as these are time-tested components of the social conservative platform, shared both by churches and politicians like Santorum. Nothing shocking there. Nauseating, yes. Shocking, no.

But there are a few theological issues I have to take with Terry’s sermon. For one, he espouses what I call “Jesus worship,” which is something that has bothered me for a long time about evangelical theology. While Jesus himself said, time and again that (to paraphrase) “it’s not about me, but rather about the One who sent me,” most evangelical Christians seem intent on ignoring Jesus’ own directive here. Jesus did not seek to be worshiped.

Yes, he allowed a woman to pour perfume on his feet, as he seemed to understand that people tended to cling to what they could see and touch. But he urged us not to stop there. He wanted us to look beyond him to God, using him as a means to seek God. But despite this, plenty of Christians still get caught up in the misdirected practice of Jesus-worship.

Second, Terry’s Christian exceptionalism with regard to other religions is simply founded on ignorance. In one breath, he says “we” Christians worship the God of Abraham, Isaac and Jacob, but then he says we don’t worship “Allah,” the Muslim name for God. Now, I’m no religious history scholar, but I’m pretty sure we can trace Christianity, Judaism and Islam back to the God claimed by Abraham, Isaac and Jacob.

Finally, there’s a falsely claimed sense of victimization in his sermon that is often employed in the Christian “culture wars.” Terry says he’s tired of being told he can’t say the things he wants to say about his faith, and then he proceeds to say what he wants to say about his faith. Yes, he is being criticized for it, but being allowed to say what you choose is different than expecting to be able to say it without any consequence.

But the adversarial nature of his argument is necessary to keep the us-versus-them dichotomy going. This is the fuel for the culture war, which only the Christian right, such as the likes of Terry, seem to be waging. But it galvanizes followers around a clear common cause, and it gives them something both to be angry about and afraid of. Since fear and anger are essential components to the platform of the Christian right, Terry et al can’t drop the rhetoric, absurd and out of touch as it may sound.

A good leader in the political sphere is synthetic, not in the sense that they are fake, but rather in that they bring disparate groups together. But the primary purpose of this kind of harsh religious rhetoric is to divide, and not only that, but also to suppress those not of like mind as inferior.

It may be ideal for building up a baptist church in Baton Rouge, but it’s un-Christlike. and it’s also poor political strategy. Santorum has dug his own political grave.

March 31, 2012 A Minister's Letter of Apology to Young Adults
Recent Comments
5 Comments | Leave a Comment
"This blog is dated March 2016. It wasn't that good then and it's no better ..."
Bob Shiloh Five Ways “Representative Democracy” is Failing ..."
"sounds cool."
Brandon Roberts Untitled
"cool."
Brandon Roberts Christian Panders, Fundies for Sanders, Bible ..."
"I believe taking calculated risk are super important. having the faith that it will work ..."
Sean Lewis 25 Christian Blogs You Should Be ..."
Browse Our Archives
Follow Us!