Read a follow-up to this piece HERE.

Yes, I know it is Thanksgiving. So maybe I am feeling a little bit more generous than usual. But even I am not beyond offering some grace and compassion toward Mars Hill Pastor Mark Driscoll,  especially when I think he is being treated unfairly.

My wife, Amy, likened it to the president pardoning a symbolic turkey. Funny, I don’t see the parallel. Anyway…

Driscoll wrote a book called “A Call to Resurgence,”  in which he has been accused  of borrowing from, and even directly quoting, the written work of Dr. Peter Jones,  an adjunct professor at Westminster seminary in California.  Although Driscoll references Jones in the book, he does not always formally note and attribute ideas that, arguably could or should be credited to Jones.

Tyndale House Publishers, Driscoll’s publishing house, recently released a public statement that they have contacted Jones and are working directly with him and Driscoll to clarify any concerns and reach a mutually agreeable resolution.  But this came to the general public’s attention before this when radio talk show host Janet Mefferd had Driscoll on the air.

When she asked Pastor Driscoll about his apparent plagiarism, he responded that, although he borrowed “big ideas” from Jones, the writing was his own, and that he felt he properly credited Jones in the book.  When Mefferd  continued to press, Driscoll offered the following apology, according to a post from blogger Jonathan Merritt:

“If I made a mistake,” said Driscoll, “then I apologize to Dr. Jones, my friend…that was not my intent, for sure.”

Still, Mefferd stayed on the offensive.  Effectively, she accused Driscoll of stealing Jones’ intellectual property,  which Driscoll tried to deflect by suggesting, perhaps, she was having a “grumpy day.”  And yet, she kept him in her sights.

She went on to suggest that he might be sued for his actions and, with all the flair of a radio talk show pundit, suggested that he would, ultimately, have to answer for his actions.

The grilling went on, and Driscoll demonstrated remarkable restraint, especially considering his past. Mefferd even went so far as to accuse Driscoll of hanging up on her in the middle of the interview, although it is apparent from the recording that, when she thinks he is gone, Driscoll responds with, “I’m still here.”

I am all for accountability and  for the protection of the intellectual property of my fellow authors. Driscoll may have screwed up, and he may even have done so knowingly. As far as I am concerned, that is a matter to be dealt with between him, Jones and their respective publishers and representatives.

My greater concern here is that it seems Ms. Mefferd  was mining for a juicy story and, when she did not get the dramatic response from Driscoll that she had hoped for, she pressed on in an attempt to create drama where there was none. Ultimately, she ended up wrongly accusing Driscoll of  talking during the interview and insulting her by hanging up, which he did not apparently do.

Chances are that Mark Driscoll and I will not be starting a bowling team together anytime soon. I probably won’t make it onto his Christmas card list, and that is just fine. I don’t care for much of what he stands for, how he treats women or the visceral anger he demonstrates on a regular basis toward those who disagree with him.

But he is a human being. He is an imperfect one at that, as we all are. And I would hope that, if he was in Mefferd’s position and I was in his,  he would offer some modicum of dignity and grace toward me, especially if I offered an apology for any offense I may have committed.

Stealing intellectual property is no small transgression, but neither is aggressively attempting to humiliate another person in the public eye in a desperate attempt to grab ratings to be the first to break a juicy new story.  Mark Driscoll deserves better. 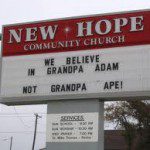 December 1, 2013 Church Sign Epic Fails, "Grandpa Ape" Edition
Recent Comments
73 Comments | Leave a Comment
"awesome."
Brandon Roberts Not “That Kind” of Christian
"nice article."
Brandon Roberts Talking Sex with Invisibilia’s Hanna Rosin
"Thanks for a fun romp. As a Presbyterian minister, I would have welcomed you gladly ..."
Zeigler John Leaving A-Holiness Behind
"Dear Sarah and Christian,I'm sorry for what has happened to you and your mother and ..."
Amazingaljicrowley3679 Letter From a “Demon Possessed” Woman
Browse Our Archives
Related posts from Christian Piatt