Los Angeles Has Been postChristian-ized

It’s official: the postChristian tour has left it’s mark on the City of Angels.

We started this leg of the tour at Chapman University, where I shared a chapel sermon and a book talk at their AMAZING interfaith center. It’s legitimately one of the most inspiring spaces in which I’ve ever been a part of a worship experience, which made my talk about the end of Christian empire, and the necessary deconstruction of much of institutional religion, that much more poignant. The folks at Chapman were fantastic and receptive as always, and I’m happy to call them a partner in this search for a re-imagined Christlike path.

Yeah, yeah. I know I need to learn to hold the phone horizontally when making videos. Dammit, Jim! I’m a writer, not a cameraman!!! 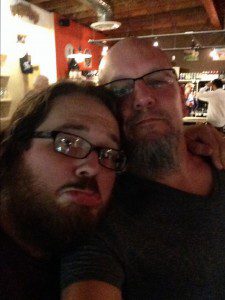 Second stop on the tour was a most excellent evening at Neighborhood Church of Palos Verdes (UCC), where we had a live Homebrewed Christianity event with Tripp Fuller, Benjamin Corey, Pete Rollins, Bart Campolo and myself, along with about fifty of our closest Homebrewed friends. The substance and energy of the conversation did not disappoint as five nerds grappled with what it means to have faith in a postChristian world. Thanks to Bart’s humanist perspective, we even engaged questions about whether Jesus is a source of healing in the world, the source of pain, or even some combination of both.

Friday, I got to hang out with some of my good Disciples of Christ peeps in Garden Grove for their regional assembly. Worship went long before my talk and lunch came afterward, so this may have been the fastest talk I’ve ever done. Good thing I had a large coffee on the way there…

Finally, I trekked out east to Loma Linda where I spoke to a couple dozen professors, doctors, psychologists and other really smart folks who do an ongoing class on all things Jesus. Suffice it to say that this gathering – which consisted of a half-hour talk from me and a 90-minute Q and A with the group afterward – was the most intellectually rigorous workout I’ve had in a while. Always good to have someone to push you to really articulate what you think, why you claim it and why you have any authority to share it in a book and with a national tour. Great group and a wonderful gathering of minds and hearts.

Next up on the tour, I’ll head to Tulsa, OK on Friday, where we’ll do everything from a church brunch to a Beer and Hymns throw-down and even another live Homebrewed CultureCast with guest cohost Josh Linton.  Fun will be had, books will be shared, and yes, most likely, a beer will be consumed.

October 14, 2014
The Good and Bad in the Vatican's new LGBT Statement
Next Post 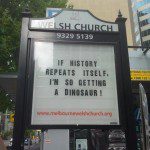