During the 2000 Summer Olympics in Sydney, Australia, Laura Wilkinson remarkably won the gold medal in platform diving only a few months after she had broken her foot in a training accident. It was a feat many thought was physically impossible. She went on to become the only woman in history to win platform diving gold medals at the Olympics, the World Cup, and the World Championship.

Laura credits her success not just to hard work and dedication, but also to the guidance she’s gotten from her Christian faith — a faith from which she walked away for a while. Like a lot of young people, Laura stopped attending church services which led to her talking with God less and less. She didn’t reject God; she just drifted away from Him. Then, in 1997, two people with whom she was close died unexpectedly.

When I interviewed her on Christopher Closeup in 2008, Laura explained, “I was lost after losing them. I withdrew from a lot of people. I [felt like] diving was all I had left. I thought it was the only thing I had control of so I wrapped my life in it. Then I started getting disoriented in the air while diving…The one thing that I thought made my life stable was totally slipping away. That’s when I realized what I was missing. I didn’t know what God wanted to do with my life, but I knew I needed Him to fix it and to be the center of it and to put my pieces back together. I actually rededicated my life to Him in the middle of a diving meet. The way it’s intertwined has really made me love the sport because God used it to bring me to my knees and bring me back to Him.”

One of the welcome side effects of Laura’s learning to put her trust in God is experiencing a joy so real that she smiles even in the most tense situations. She distinguishes happiness, which tends to spring from our circumstances, from joy, which results from relying on God for strength. She’s also learned to practice gratitude, even when medals and victories don’t come her way.

Laura says, “One of the things I’ve learned in the last 10 years is how to thank God even when things aren’t going well. I can still thank God for my life, for my family, for how big He is and how awesome He is, and for creating this place and all the people in it. There are always reasons to find thankfulness for God. When you’re able to do that, it melts away all the stuff going on, and your problems seem really small.”

Laura also acknowledges the other side of that coin. When things are going well in her life, there’s the temptation to fall back into the old pattern of focusing mainly on herself.

She admits, “I think that’s really easy to do. I don’t even think it’s always conscious. When things are going well you don’t talk to God as much because [you think] you don’t need Him. I think God does His most powerful work a lot of times when we’re on our knees, when we’re broken. That’s when He molds us the most. But hopefully when you learn how to thank Him when times are rough, you’ll also thank Him when they’re great. I’m learning both. I’m still learning.”

Visit the Christopher Closeup archive to listen to my interview with Laura. 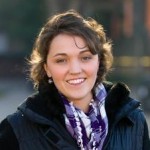 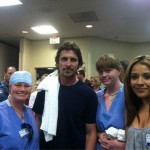 July 24, 2012 Batman Actor Visits Aurora's Wounded
Recent Comments
0 | Leave a Comment
Browse Our Archives
get the latest from
Catholic
Sign up for our newsletter
POPULAR AT PATHEOS Catholic
1