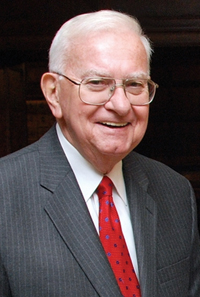 With story instincts and writing talent honed during a lifetime of working in the Catholic press, Jerry’s columns would always shine a light on Christopher ideals and make them come alive for readers. He was also a great help to me personally in my work as Editor-in-Chief of Christopher literature.

While Jerry will continue doing some writing and editing work for us, he has decided to retire from his columnist duties. Here is his farewell column, which looks back at his admirable life and career.

A Fond Farewell by Jerry Costello

This will be my final column for The Christophers. As a matter of fact, this will be my final column, period. It’s not easy to write those words, but the time has come. I’m 85 now (it’s not easy to write that, either), and while the head seems equal to the task, the reflexes are not. The fingers don’t glide over the keys as once they did, and whatever I write takes a lot longer than it used to. I wanted to end this before it became a chore, because I’ve really enjoyed our regular visits.

The columns go back a long way, about 60 or 70 years. After a lifetime in the news business, they start to add up. My first editing job was with The Courier, published by the 532nd Military Intelligence Battalion, and I did a column on the ups and downs of Army life in postwar Germany.

Then, at the old Paterson Evening News, I found myself in the sports department in the fall of 1957. I covered the home games of the New York Football Giants then, and they were giants indeed: Charlie Conerly, Frank Gifford, Andy Robustelli, Kyle Rote, Sam Huff, Alex Webster, Dick Nolan. Jim Lee Howell was the head coach, and his assistants included a couple of future Hall-of-Famers named Vince Lombardi and Tom Landry. The press corps was relatively small, and we had free access to players and coaches.

I decided (with the approval of Joe Gootter, the sports editor) to spice things up, and with the introduction of Sports Sketchbook by Jerry Costello, a column was born. Through a succession of newspapers that followed over the years, I never stopped. I soon dropped the sports angle, after a four-year stint at Suburban Trends, and then, following a couple of way stops, it was on to The Advocate in Newark, The Beacon (14 years, mostly under Bishop Lawrence B. Casey) and Catholic New York (10 years, at first with Cardinal Cooke and then with Cardinal O’Connor). My column-writing duties were mostly with those papers, although there were detours — with America magazine, Claretian Publications, and the Propagation of the Faith.

It all added up to lots of words, probably millions of them, and I thought I was ready to retire. I studied Scripture for a couple of years at Seton Hall University, but then came out of retirement when The Christophers beckoned. I was soon back in the business of writing columns, this time with a difference. I did two columns a month, built around the Christopher theme. They were upbeat, all of them. I can’t tell you how much I enjoyed writing them—but, as I said earlier, the time has come to call it a day.

Well, I’m not calling it a day entirely. I’ll still write and edit short articles for The Christophers’ companion publication, “Three Minutes a Day,” which features a concise story, a Scripture verse, and a prayer for every day of the year. Its editor is Tony Rossi, my sidekick at writing columns, and a real pro in every sense of the word. Mary Ellen Robinson keeps things buzzing at The Christophers as our COO. I’ve got to thank innumerable editors, too, older and more recent, who invariably punched up the column when it needed a little punching up.

And most of all, let me thank my wife, Jane, who has first crack at whatever I write. She acts as a scout, too, for potential subjects, retaining the editor’s eye she picked up at the Paterson Evening News—where I first met her, all those years ago. Let’s see now—oh my gosh, it’s getting close to 64 of them. It’s beginning to look like a steady arrangement.

January 3, 2017
If You're Still Searching for a New Year's Resolution, This is Perfect for You
Next Post