R.I.P. Officer Steven McDonald: ‘God Has Asked Me to Be a Witness to Do His Will in This World’ 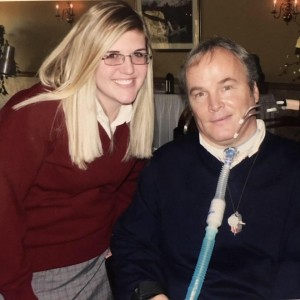 New York City Police Officer Steven McDonald was shot and paralyzed in 1986 by teenager Shavon Jones. From then on, McDonald required a respirator to breathe. However, he didn’t live life feeling sorry for himself. Instead, he became a force for peace and mercy, going so far as to forgive the teen who shot him.

Officer McDonald died of a heart attack today at age 59. He was a guest on “Christopher Closeup” in the early 2000s, and he was a big supporter of the homeless support ministry Mychal’s Message, which The Christophers honored a few years ago with an award for its founder, Shannon Hickey.

We send our condolences to Officer McDonald’s wife Patti Ann and son Conor, who is also a police officer with the NYPD.

Here are a few news reports about McDonald and the ways in which his Catholic faith shaped his approach to life.

From the Daily News:

The courageous cop emerged as an even bigger hero from his specially-equipped wheelchair than during his time walking a city beat. His unlikely second act brought the indefatigable McDonald together with President George W. Bush, Pope John Paul II, Nelson Mandela and Mayors Bloomberg and Koch. Though unable to walk or hug his family, he traveled on missions of peace to Northern Ireland, Bosnia and the Middle East….

…McDonald sat for interviews with Barbara Walters and David Letterman, never varying from his personal gospel of faith and forgiveness. The officer practiced what he preached: McDonald delivered a stunning public absolution of his shooter on the day of his son’s baptism. “My simple understanding is that God has asked me to be a witness to do his will in this world,” McDonald told the Daily News before the 25th anniversary of the shooting. “And I think that’s my life.”

She remembered sitting by McDonald’s hospital bedside in the days after he was paralyzed with fellow Officer Richard Pastorella, who was blinded by an FALN terrorist bomb at Police Headquarters on New Year’s Eve 1982.

She recalled that McDonald kept saying he only wished he had the ability to yank out the electrical cords and medical lines “and unplug the machines.”

But she and Pastorella, both members of the newly created Police Self-Help Group, tried to encourage McDonald that he had much to live for since his young wife, Patti Ann, was four months pregnant.

“Everyone was encouraging him that he was going to have a child, and he should want to have his child know who he is,” she said.

“We would say, ‘You are not your arms and legs, that you are what is in your mind, and heart, and that these are your values that you want to give to your child,” she explained. “These are the many richer things you can give your child, of who you are inside.”

When Conor was born five months later, the only way McDonald could feel his son was when he was pressed up against his face.

“He had the strength and will to move forward,” Burke said. “And look at how much he has accomplished, as an inspiration and role model for so many others.”

In 1987, McDonald chose Conor’s baptism to proclaim his forgiveness for Jones.

“I forgive him and hope that he can find peace and purpose in his life,” he said in a statement read by Patti Ann at Bellevue Hospital.

When Stephen McDonald was shot, there was Mass every day at his bedside at Cardinal O'Connor's direction/promise #RIP

Det. McDonald called Mass at his bedside every day in the hospital after he was shot a "game changer"

Eternal rest grant unto him, O Lord. And let the perpetual light shine upon him. And may the souls of all the faithful departed, through the mercy of God, rest in peace. Amen.

January 6, 2017
The Catholic Church (and the Jesuits) Owe "MASH's" William Christopher a Debt of Gratitude
Next Post

January 14, 2017 Phillip Phillips Sings His Hit "Home" at Steven McDonald's Wake in Tribute to NYPD Hero
Recent Comments
0 | Leave a Comment
"What was the name of the gentleman you were speaking to on CHristopher Closeup Sunday ..."
Katie Raggio Hossley Jimmy Kimmel Deserves an Emmy For ..."
"What a great article! Always loved the chracter and how it was developed from the ..."
Rick Malloy, S.J. The Catholic Church (and the Jesuits) ..."
"I loved the show and Father Francis John Patrick Mulcahy S.J played by the actor ..."
Fr.Ed Wade,CC The Catholic Church (and the Jesuits) ..."
"What a great tribute to a fine actor. As a Catholic I was never more ..."
RajunCajun The Catholic Church (and the Jesuits) ..."
Browse Our Archives
Related posts from Christopher Closeup