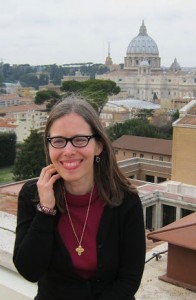 When rock journalist Dawn Eden left behind her sexually promiscuous lifestyle to embrace chastity, Christianity, and eventually the Catholic Church, the decision shocked a lot of people. She shared her journey of conversion in her first book “The Thrill of the Chaste: Finding Fulfillment While Keeping Your Clothes On.”

Now Dawn has revealed more of her personal story – a painful part, in fact, as a victim of childhood sexual abuse – in her newest book “My Peace I Give You: Healing Sexual Wounds with the Help of the Saints.”

Raised by her mother after her parents’ divorce, Dawn grew up in what she calls a “sexually porous household.” As she explained to me on Christopher Closeup, “I wasn’t sheltered from adults’ nudity or substance abuse or sex talk.” In addition, she was abused by a janitor at a temple her mother sometimes attended.

All these experiences left Dawn emotionally scarred because “children do tend to blame themselves for the evils committed against them. They think they must have brought it on in some way.”

It was while reading the Hans Christian Anderson fairy tale “The Snow Queen” at the age of seven that Dawn was first introduced to the message of the gospel, specifically through the verse from Matthew 18:3 which says, “Unless you turn and become like children, you will never enter the kingdom of heaven.”

“How sad I felt reading those words,” said Dawn, “because I felt, even at the age of seven, that I couldn’t become like a child. I just knew that my life was different from the other children in my life. I knew that I was exposed to things they hadn’t been exposed to…Part of the message I want to share is that the gospel verse is not calling us to a literal childhood. This is something that Therese of Lisieux sought to share with her Little Way of spiritual childhood. The way of childhood that the gospel is calling us to is available to everyone, regardless of what their actual childhood was like. ”

The abuse also left Dawn confused as to her own identity: “Child sexual abuse is founded on lies. The abuser lies to the victim. As a result, the victim can develop a false self that’s based on these lies. In my book, I talk about how I now realize that persona I was inhabiting during the period I wrote about in my first book, ‘The Thrill of the Chaste’ was really a false self based on the lies of my abusers. I had been treated like an object, so as a teenager and young adult I internalized those lies and believed that since people were going to objectify me anyway, I might as well control how they objectify me. In order to try to protect myself because I felt vulnerable, I became sexually aggressive and created this hard, provocative kind of shell. That was profoundly damaging because I was living contrary to the identity that God had given me.”

Despite the pain, there were still instances of God’s grace in Dawn’s early life. Though her mother practiced a spiritually eclectic combination of New Age and Jewish beliefs, their annual Passover Seder became a beautiful ritual filled with family and friends which Dawn looked forward to every year. The sense of communion with loved ones that she felt at the Seder foreshadowed the holy communion she would experience later in life when she converted to Catholicism and took part in the Eucharistic meal. It also taught her about the value of holding on to positive memories amidst the negative ones.

Dawn explained, “A problem for people who have suffered trauma is that they may think memory is the enemy. They try to block out the parts of their past to block out the trauma. But Pope Benedict points out that if we block out our memory, we also can wind up blocking out our identity so that we don’t have any solid base from which to grow. My mother, even though she had this household where some bad things happened to me, she felt very strongly that my sister and I should have Passover every year. That was a gift. It was through reliving the story of the Exodus every year that I felt a connection to the Jewish people that gave me a beautiful familiarity when I was received into the Catholic Church at the Easter vigil and heard the Easter candle prayer, the Exultet, this great song of joy that the Church sings for Christ having brought the Church to its own Exodus.”

One of the greatest gifts the Church has given Dawn is friendships with the saints: “There are saints who have experienced contact sexual abuse, and saints who experienced the non-contact kind. What they have in common is that it wasn’t in spite of their wounds or in spite of the evil committed against them that they drew closer to Christ. It was actually through their own experience of woundedness that they drew closer to the wounded and resurrected Christ. So they show us the way.” 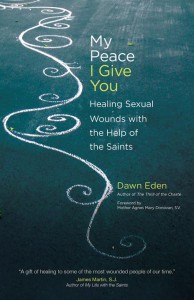 Dawn now hopes to lead other sexual abuse victims toward healing with the help of the saintswho helped her. She said, “Every one of us, through our baptism, is deputized to be a conduit to the light of God. In that sense, there’s nothing special about a baptized person shining light on others. That’s what we’re all called to do – and that’s what the Holy Spirit who dwells in us through our baptism, strengthens us and enables us to do. What’s different about what I do is that I’ve actively sought to learn how I can help others through my wounds. And these were wounds that I used to feel guilt and shame about, which I now realize is misplaced guilt and shame. So for me, being able to bring these wounds into the light of Christ has been very healing. It’s also been a joy to be able to ask God how He can use my pain to help others.”

To listen to my full interview with Dawn Eden, click on the podcast link:
Christopher Closeup podcast – Guest: Dawn Eden

November 7, 2012
Change the Culture, Change the World
Next Post

November 9, 2012 Do You Know What We Need Right This Very Minute?
Recent Comments
0 | Leave a Comment
Browse Our Archives
Follow Us!