On this day after the election, social media is filled with either jubilation or despair depending on which side of the political spectrum you fall. We as citizens are very invested in how our politicians will change our country for better or worse.

But the almost exclusive focus on politics as a means of change can become an idol in itself, resulting in obliviousness to the fact that culture has a greater influence than we realize. In a nutshell I’d say, “Change the culture, change the world.”

Many Christians have simply written off all mainstream media (TV, film, music, literature) as being a lost cause. In doing so, they’ve created a self-fulfilling prophecy. The less Christians are invested in the culture, the less the culture will reflect Christian values.

In an article for First Things a few months ago, Peter Blair – editor-in-chief of Fare Forward – wrote about this very topic, which is good to keep in mind:

In his recent book Bad Religion, New York Times columnist Ross Douthat argues that, while political engagement is an essential part of the Christian presence in the world, American Christians have perhaps put too much emphasis on political engagement and party politics to the exclusion of other aspects of Christian witness. He recommends that Christians recover a more holistic presence in the world, and he places a dedication to fostering sanctity and beauty in the center of this recovery.

He is not the only Christian commentator to offer recently this same analysis. The University of Virginia sociologist James Davison Hunter lamented the politicization of Christianity in his widely popular yet deeply scholarly To Change The World. Gregory Wolfe, editor of the journal Image, argues in Beauty Will Save The World that Christians need to understand the primacy of culture in shaping how people think, and learn to engage the world through beautiful cultural production rather than partisan battles.

One need not abandon all commitment to political engagement to appreciate the point these authors make. What they ask us to reject is the idea that politics is king, the ultimate and only paradigm through which we approach the world…

…When mainstream culture is hostile to you, it’s tempting to engage politically but otherwise withdraw into ghettos of self-segregation.

If we want, however, to revitalize Christian witness in this country, out first instinct should not be to turn to politics (though politics is important), but to culture in all its artifacts. Some of the greatest modern Christian figures have realized this: C.S. Lewis and G.K. Chesterton both wrote about politics, but they also produced poetry, novels, and plays. Lewis’ apologetics reached a wide hearing, but his Narnia series an even wider audience. Many people who would otherwise be hostile to straightforward Christian arguments have been seduced by the beauty of Marilynne Robinson’s novels. We should strive towards a greater emphasis on this kind of successfully holistic witness in American Christianity.

The first step should be to cease speaking of ‘Christian art.’ Good art is good art. If Christians stopped trying so hard to produce ‘Christian art,’ and tried, instead, to produce good art, they would find that they have garnered a larger hearing—and that the Christianity which cannot but help to influence their artistic vision had begun to more powerfully influence the wider culture than they ever imagined.

Those are valuable insights from Peter about how to approach the future in a way that lights a candle rather than curses the darkness. So if you’ve got faith, talent and a passion to tell stories, develop that talent and nurture it to produce good art that conveys both truth and beauty.

If you don’t know where to start, consider the Act One screenwriting or executive programs – or the new script consulting program Catharsis. 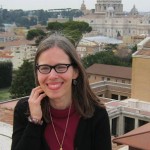 November 8, 2012 A Sexual Abuse Victim's Efforts to Be a Conduit to the Light of God and the Saints
Recent Comments
1 Comment | Leave a Comment
Browse Our Archives
Follow Us!