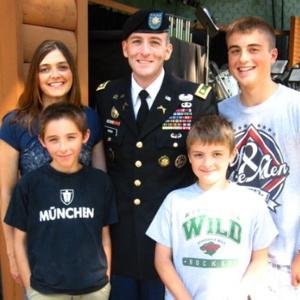 (Editor’s Note: My interview with Lt. Col. Mark Weber was recorded a few weeks ago, but held until Father’s Day week. Unfortunately, Mark passed away yesterday. Our deepest condolences to his family. Eternal rest grant unto him, O Lord, and let perpetual light shine upon him. May his soul and all the souls of the faithful departed, through the mercy of God, rest in peace. Amen.)

When Minnesota resident, Lt. Col. Mark Weber, was diagnosed with Stage IV gastrointestinal cancer on Thanksgiving Day 2010, it was actually a piece of good news compared to what he’d previously been told.

His initial diagnosis had been pancreatic cancer, with the prediction that he would die within a few months. Considering that Weber led an active life and had been scheduled to deploy to Afghanistan as a member of General David Petraeus’s personal staff, the news came as a major shock to him, his wife Kristin and their three sons, Matthew, Joshua and Nick.

Weber had been a soldier for 23 years, often in war zones, so he and his family already had the “What if?” discussions in case he didn’t make it home. This, however, they were somewhat unprepared for.

The gastrointestinal cancer diagnosis on Thanksgiving was a tiny point of light because, though the disease was still terminal, it was more treatable than pancreatic cancer and offered him the possibility of several more years of life. Weber became determined to live the rest of his days to the fullest by writing down the life lessons he’d learned in book form to give to his sons. It would be his way of being present for them as a father long after he was gone.

As Weber explained on Christopher Closeup, he initially wanted to keep the book within the family. After meeting with Minnesota chaplain, Col. John Morris, he changed his mind because Morris told him that people needed stories of wisdom and inspiration. “You need to look at this as a charge of responsibility,” said the chaplain.

Weber self-published the book under the title “Tell My Sons,” sharing intimate details and life lessons that would be of interest to anyone.

One formative experience for Weber, which taught him about enduring suffering with dignity and grace, occurred when he was 14 years old. He started caring for his Grandmother Garofalo, who had a stroke, was confined to a wheelchair and couldn’t move half her body.

He said, “I took this woman to the bathroom; she weighed 160 pounds! I weighed maybe 130? I had to take her underwear down and help her in every borderline undignified way. But there was no lost dignity; it was just so natural. For me to be able to take care of her felt comforting!”

Weber believes his grandmother’s example helped him deal with his own periods of debilitation. “When I can’t do something, I find it much easier to accept offers of assistance,” he said. “Pride is not a barrier for me.”

He gets aggravated when people tell him, “I could never do what you’ve done.” The reason: “Because you are abdicating your own personal responsibility for your adversity when it comes. The fact that you don’t realize it is perhaps the most dangerous thing.”

The Mystery of Faith

Weber, a lifelong Catholic, admits that he doesn’t believe God directly intervenes in people’s lives. He said, “I’m of the school of thought that God didn’t give me this cancer and He’s not gonna take it away. That, for reasons I can’t explain, is what we’ll call the mystery of faith, it’s part of the journey. For me, it’s cancer. For someone else, it’s M.S. It’s just life. And it’s not all bad because, I’ll tell you, the past two-and-a-half years have been a joy ride!”

Weber doesn’t see his views as a lack of faith. On the contrary, he believes it’s helped him find the miraculous in the ordinary. He said, “There are many people who say, ‘I’m gonna pray for God to heal you.’ I can buy that. Even though I’m part of that group that doesn’t believe God intervenes, I won’t cast it aside. But I think God [says] to us: ‘I’ve given you the miracle! Look at that body you’ve got! Look what it can do!”

A Spirit and Message of True Grit

With Weber’s story growing in popularity and his self-published book selling 10,000 copies, he created a Facebook page on which people could stay up-to-date with what was going on in his life. He wanted to name it something special because he was an Army man in the fiercest combat situation of his life. When a friend suggested he call the page “Operation True Grit” because of the way Weber (a John Wayne fan) approached his illness, he knew he had found the words that combined the spirit and message of what he wanted to accomplish. 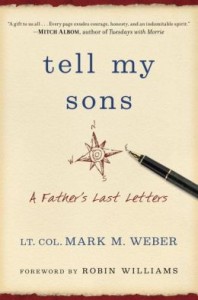 “Tell My Sons: A Father’s Last Letters” grew so popular that it was picked up by Ballantine Books and released last week on a much wider scale than Weber had ever anticipated. When asked what he hopes readers get out of the book, he answered, “Perspective about life. There’s a compass that I have on the cover. You’ll notice that the compass doesn’t point in any particular direction. It’s a tool for you to use the way you want to, depending on your purpose and your direction in life. You [need to] use that compass to help answer the question, ‘What am I gonna do when life doesn’t go the way I want it to?’ 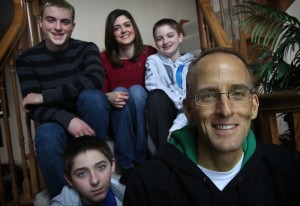 Though the focus has been on fighting cancer, the battle has taught Weber a lot about love – both giving it and receiving it.

He said, “One of the things that brings me to tears these days more than anything else – I mean, I cry at supermarket openings – is the impact that I’m able to have talking to high school students. I had an experience like that last week where a girl started to speak about her dad; she had lost him about a year and a half ago from liver cancer. They had decided they were going to do hospice care at home. She started to cry, just a little bit. She said he had a pillow that he put between his legs as he wasted away in his final days. He kept it between his legs to keep the pressure off his back and he ended up dying that way. ‘And that pillow is my favorite pillow,’ she said. I was struck by the way that she shared; it seemed pretty open like she was comfortable having this discussion. But then the bell rang and all the kids left and a woman grabbed my shoulder from behind. It was one of the youth ministers, and she had tears in her eyes and said, ‘That is the most that girl has ever spoken about her dad, in a year and a half.’ And we had helped each other; I had helped her and she had helped me. Man, that’s love.” 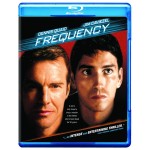 June 19, 2013 Music's Healing Power for Premature Babies
Recent Comments
0 | Leave a Comment
Browse Our Archives
get the latest from
Catholic
Sign up for our newsletter
POPULAR AT PATHEOS Catholic
1