Advice for the Spiritual Sons and Daughters of Mary

Advice for the Spiritual Sons and Daughters of Mary August 15, 2014 Tony Rossi 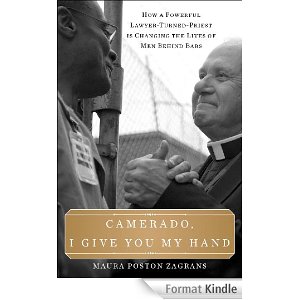 A few months ago, The Christophers recognized Father David T. Link with our James Keller Award at the annual Christopher Awards ceremony. Father Link became a priest late in life, and now serves as chaplain for several Indiana State prisons.

In a book about his life entitled “Camerado, I Give You My Hand,” author Maura Poston Zagrans shared this story about a Mass Father Link held for inmates at one of the prisons on the Solemnity of the Assumption of the Blessed Virgin Mary. Since we celebrate that feast today, here is that excerpt from the book.

After the introductory rites and the readings, it is time for Father Dave to give his sermon. The chapel is steamy and the men are still. Father Dave walks to the lectern, gives his notes a quick review, looks out upon his congregation, and begins.

Around the room, heads are nodding.

“But we also have a spiritual mother who watches over us every day, no matter where we are.”

He sketches what little facts are known about the mother os Jesus. She was a young girl, he says, and she lived in a backwater village, a place of poverty and little education.

“In essence, our spiritual mother was a teenager from the ghetto. And she had a tough life.”

He lists the hardships that Mary knew.

“Think about it. This was His mom. And He had the power, so why not? Maybe He wanted to save Mary from the sorrow of death. That’s probably part of it. It may have been to reward Mary for having endured great sorrow in her lifetime. That’s probably also a part of it.

“But most likely God assumed Mary into heaven because He wants us to know for sure that our spiritual mother is in heaven, where she is caring for us. Be assured that right now Mary is looking down on this chapel with pride and love for all who have come to honor her son.”

At this point his shoulders drop, he steps back, and his voice takes on a new tone.

“To me it is amazing how little of what Mary said has been captured in Scripture. Perhaps the most famous are the words she spoke at the wedding feast of Cana. She told the servants, ‘Do whatever He tells you.’

“Her advice was not meant just for the servers at a wedding reception. Her advice applies to all of us who are the spiritual sons and daughters of Mary.”

Father Dave scans the chapel. When he is satisfied that he has made eye contact with as many upturned faces as possible, he says, “Do whatever He tells you.”

August 20, 2014 After Grim Prenatal Diagnosis, Couple Takes Unborn Child on Bucket List of Adventures
Recent Comments
0 | Leave a Comment
"What was the name of the gentleman you were speaking to on CHristopher Closeup Sunday ..."
Katie Raggio Hossley Jimmy Kimmel Deserves an Emmy For ..."
"What a great article! Always loved the chracter and how it was developed from the ..."
Rick Malloy, S.J. The Catholic Church (and the Jesuits) ..."
"I loved the show and Father Francis John Patrick Mulcahy S.J played by the actor ..."
Fr.Ed Wade,CC The Catholic Church (and the Jesuits) ..."
"What a great tribute to a fine actor. As a Catholic I was never more ..."
RajunCajun The Catholic Church (and the Jesuits) ..."
Browse Our Archives
get the latest from
Catholic
Sign up for our newsletter
POPULAR AT PATHEOS Catholic
1