Today’s Daily News features the story of Jenna Gassew and Dan Haley, a Pennsylvania couple who are expecting their first child on October 12. The bad news is that their baby boy, named Shane, was diagnosed with anencephaly, a birth defect that results in babies missing the front parts of their brain and sometimes not even having it covered with skull or skin.

Instead of having an abortion (which is sometimes done in these cases), Jenna and Dan, who are both described as devout Catholics, are making the most of their difficult situation and celebrating their child’s life as much as they can.

Here’s an excerpt from their story:

Despite the bleak diagnosis, the devout Catholic couple decided that getting an abortion wasn’t an option for them. Instead, the parents have tried their best to turn Shane’s devastating condition into an opportunity to celebrate his short life, embarking on a bucket list of adventures for the unborn child.

“We know we have this time with him and that’s awesome,” Gassew told NBC Philadelphia.

The parents have taken Shane on trips to parks, concerts and Phillies games. He was named No. 1 fan at his dad’s baseball games for the Delco League. They’ve taken a stroll down Wildwood’s boardwalk and visited an animal zoo.

Gassew’s grandmother has made a special onesie that will fit over the child’s head. The couple has even purchased a crib set, car seat, and stroller for their little guy.

Every night before going to sleep, the hopeful mom and dad say an “Angel of God” prayer. They recite the rosary at their local church every Monday night. During those times of spiritual connection, they say Shane is especially active.

“With prayers and through the grace of God all things are possible!” the couple told friends and family on their “Prayers for Shane” Facebook page…

… Before his due date, they hope to take Shane to Ocean City, Md., and Lancaster.

“It’s the hardest thing in the world but you can make it through. We’re his parents and we’re going to take care of him as long as we can,” Gassew said.

– When Your Baby’s Life is Expected to Be Brief: A Look at Perinatal Hospice and Palliative Care 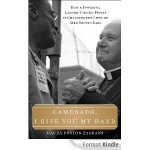 August 15, 2014
Advice for the Spiritual Sons and Daughters of Mary
Next Post

Extra Quotes from My Interview with...
On the Catholic Beat
Related posts from Christopher Closeup