When Your Baby’s Life is Expected to Be Brief: A Look at Perinatal Hospice and Palliative Care 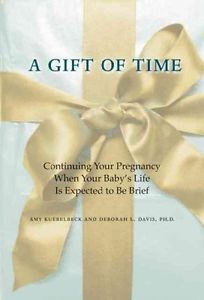 Pregnancy is supposed to be a joyful time for a couple, but for Amy Kuebelbeck and her husband it was tinged with tragedy as well. In 1999, halfway through their third pregnancy, they learned that their unborn son, who they named Gabriel, had an incurable heart condition and would not live long if he was carried to term.

Committed to their son’s life from conception to natural death, they didn’t find much support except from one nurse who told them they still had an opportunity to love and parent Gabriel, even if it was just for a brief period.

Amy took that advice to heart. Though Gabriel lived for only two-and-a-half hours, his family found moments of beauty and peace in the otherwise heartbreaking experience. Since then, Amy has been reaching out to others who are faced with the same kind of diagnosis, first by sharing her own story in the book “Waiting with Gabriel” – and more recently in the book “A Gift of Time: Continuing Your Pregnancy When Your Baby’s Life is Expected to Be Brief,” which she co-authored with Deborah L. Davis, Ph.D.

During a recent interview on “Christopher Closeup,” Amy explained that she felt called to write “A Gift of Time” because she’d been invited to speak at medical conferences to share her insights and discovered very few people were talking about this problem which affects up to 10,000 parents every year. As a former reporter for the Associated Press, she decided to “put my journalist hat back on and write what is sort of a ‘What to Expect When You’re Expecting’ when it’s not what you were expecting at all. This is a ‘how-to’ for parents as well as caregivers. I’ve had a lot of physicians and nurses say that this book is helpful to them as well.”

Filling Up Your Heart with Love

After a life-limiting diagnosis, doctors sometimes recommend terminating the pregnancy as the best option. Amy, however, offers a different point-of-view.

She says, “I think that choice is often offered out of compassion. I think the physicians do think that it’s easiest for all, so you can move on. But I think it’s a profound misunderstanding of what parental grief is like. To terminate is not a shortcut through grief. And I think that if your heart is going to break either way – and it will – why not do what you can to fill up your heart first? Not in a selfish way. You’re allowing this child to have his or her natural life, you’re protecting them. You’re allowing them to have a natural death, not something that is unnatural.”

Though many parents think that allowing their child to be born will result in pain for the baby, Amy points out that the relatively new practices of perinatal hospice and palliative care prevent that from happening.

She says, “People who don’t understand perinatal hospice and palliative care might instantly be skeptical of it and assume that any baby who dies shortly after birth suffers. So it’s really important to point out, first of all, that palliative care experts and physicians are trained to address pain. If pain is even a possibility, that pain can be addressed aggressively and effectively. It’s also important to note that with many of these babies, their passing was so peaceful that parents didn’t know the moment that the baby had died.”

While the death of a child could shake anyone’s faith in a good and loving God, Amy and her husband didn’t believe that God caused this situation. Instead, they saw God as weeping with them and, ultimately, welcoming Gabriel into His loving arms.

One of Amy’s missions is getting out the facts about the relationship and medical aspects of of life-limiting pregnancies. For instance, she points out a tragic prenatal diagnosis doesn’t necessarily wreak havoc on a couple’s relationship. In her extensive conversations interviewing people for this book, Amy discovered the opposite.

She said, “There’s a misconception that marriages collapse under the weight of a loss of a child. Statistically, that isn’t borne out. A lot of parents look at the situation and say, ‘We’re not gonna lose each other too.’ One piece of advice that I offer to parents is to be gentle with each other and realize that different people grieve differently. It’s not just men grieving differently from women, but different people grieving differently. You might not be on the same page at the same time, but one of the blessings of continuing the pregnancy is that both of you have a shared sense of purpose. As that day comes closer, people have often worked through whatever variations they may have had in their feelings and grief. It sounds counter-intuitive, but when you meet that baby, that moment is glorious.”

Another important truth is that perinatal hospice and palliative care are not expensive prospects. Amy explains, “We’re not talking about taking a baby to a hospice; we’re talking about a concept of care that you can incorporate into maternity and birth care. Then, in terms of the hospice care after birth, a small percentage of babies survive long enough to need traditional hospice care. Often, it’s just a matter of cradling and kissing that baby, passing the baby around to grandparents, and having a baptism. That doesn’t cost anything…And people describe delivery rooms that are just shimmering with love.”

Amy now edits the website PerinatalHospice.org, which offers locations of hospice and palliative care programs in every state that has one. Currently, there are about 200 of these programs around the U.S. and the world, and Amy is glad the concept is spreading, especially since she never even heard the terms during her own pregnancy. She says, “Some are in hospitals, some are in clinics; some are a little more formal than others. But it’s wonderful that caregivers are responding to this need and they are stepping up to light a candle in the darkness for these families.” 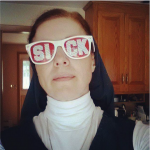 April 10, 2014
The Internet is a Medium Through Which God Can Reach the World
Next Post 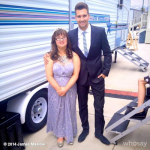 April 16, 2014 "Dancing with the Stars" Contestant Makes Dream Come True for Young Woman with Down Syndrome
Recent Comments
0 | Leave a Comment
"What was the name of the gentleman you were speaking to on CHristopher Closeup Sunday ..."
Katie Raggio Hossley Jimmy Kimmel Deserves an Emmy For ..."
"What a great article! Always loved the chracter and how it was developed from the ..."
Rick Malloy, S.J. The Catholic Church (and the Jesuits) ..."
"I loved the show and Father Francis John Patrick Mulcahy S.J played by the actor ..."
Fr.Ed Wade,CC The Catholic Church (and the Jesuits) ..."
"What a great tribute to a fine actor. As a Catholic I was never more ..."
RajunCajun The Catholic Church (and the Jesuits) ..."
Browse Our Archives
Related posts from Christopher Closeup