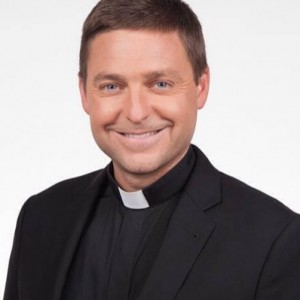 When a stranger stopped Father Jonathan Morris while he was walking on a New York City street one cold winter night, he assumed the man would ask him one of the questions he usually gets: 1) Would you pray for me?, 2) Would you hear my confession?, or 3) Hey, I know a priest named Father Jim in North Dakota. Do you know him?

Instead, the man said, “I want you to know I don’t believe in God, but I’m still trying to be a good person.”

The man didn’t say this aggressively, so Father Jonathan responded warmly and thanked him for feeling comfortable enough to approach him. During an interview on “Christopher Closeup,” Father Jonathan observed, “It probably means that we as priests, as Catholics, as people of deep belief, sometimes send off the wrong message that it’s because we believe in God that we can be good. [But] there are lots of people who don’t believe in God who recognize the moral life is a good life and it’s worth living.”

As soon as he said it, he realized it didn’t make sense to ask someone who didn’t believe in God to pray for him. So he laughed and said, “Well, I’ll say a prayer for you.”

The man smiled and started walking away, but then turned back to say, “I don’t really believe in prayer, because I don’t know if anyone is listening, but I do really like that Serenity Prayer.”

That response was an eye-opener for Father Jonathan. He’d been familiar with the Serenity Prayer all his life. It’s the prayer that reads, “Lord, grant me the serenity to accept the things I cannot change, the courage to change the things I can, and the wisdom to know the difference.”

Father Jonathan wondered, “Why is it that this gentleman who doesn’t believe in God recognized the goodness or the truth or the beauty of this prayer? Of praying for acceptance, courage, and wisdom to know when we should act and when we shouldn’t? That really opened up to me a whole window into the heart of God and what He wants for us.”

It also led him to write his newest book entitled “The Way of Serenity: Finding Peace and Happiness in the Serenity Prayer.”

We live in an age where there are so many things to terrify people: violence, health problems, money problems, unemployment, etc. Is serenity even achievable?

Father Jonathan believes the answer is “yes,” depending on how you define the word. He said, “What kind of serenity does[God] want for us? It’s not the serenity of the drunk. It’s not the serenity of the one who just puts everything aside and says, ‘I’m not gonna pay attention to this bad world. I’m just gonna live in my own little world.’ But it’s a serenity that’s much deeper than that. In the midst of difficulties, there’s a peace of soul.”

That peace of soul rests largely in our ability to follow the first piece of advice in the prayer: “What I think we’re asking of the Lord is, ‘Lord, allow me to let go of the things that I should let go of.’ And that’s hard to do. But deep down, we know that there are some things we need to let go of. How about our anger or resentment against people who have offended us? Should we let that go? I think most people recognize it’s not doing me any good, holding onto that.”

However, Father Jonathan found that it takes more than simply “letting go” to achieve serenity. There’s another element that he learned from his mother who had the prayer hanging in the family bathroom when he was growing up.

While writing the book, he asked her, “Mom, what do you think about serenity? What is that for you?”

Is Religion an Obstacle to Serenity?

For those who see religion simply as a list of rules and regulations, religion might be seen as an obstacle to serenity. But for Father Jonathan, the opposite holds true.

He said, “Sometimes religion can feel like, ‘You can’t do this, you shouldn’t do that, God’s gonna punish you if you do this.” But on the other hand, we know deep down that there are certain things we shouldn’t do, that are not helpful to us, that disorder our soul. So as long as the things that we can’t do or shouldn’t do are actually things that will make us more happy if we don’t do them long-term, then religion is a blessing! Look at the Ten Commandments! We could say, ‘Aw! Look at, all these things we can’t do!’ But even in our society, don’t we realize that it’s helpful when people don’t steal, when people don’t lie, when people don’t cheat on their wives? Do we recognize that those things are good? Yeah, we do. Religion may be complicated, but my relationship with God is a path toward real peace and serenity and happiness.”

Another aspect of serenity involves being humble and not judging others. That was a lesson brought home to Father Jonathan when his parents visited him from Ohio two years ago. They were in downtown Manhattan near his former parish of Old St. Patrick’s Cathedral when his father spotted a shirtless, pony-tailed, gray-haired man wearing cowboy boots, jean shorts, and all sorts of chains around his neck. The elder Morris said, “Oh my gosh, now I’ve seen it all.”

The next day, said Father Morris, “I was in the church doing my morning prayer, and that same gentleman was over to the right praying on his knees in front of the Blessed Virgin Mary. I saw him as he was walking out of the church, and I said, ‘Is there anything I can pray for you for? You looked so intent.’ And he said, ‘No, I do this every day. I just go and I thank God, and I thank the Mother of Jesus, for all the blessings that they have allowed in my life.’ I went and told my dad that, and he was blown away and he said, ‘Oh my gosh. I feel so humbled by having that brash judgment, just assuming that this guy was a very confused guy.’ When you’re grateful, you’re humble, and the humble soul, I think, is the soul open to God and also essentially, a peaceful soul.” 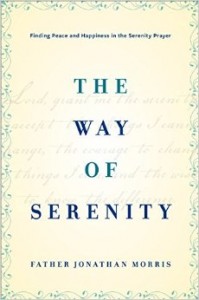 Though “The Way of Serenity” isn’t specifically about the Christopher approach to life, Father Jonathan sees a connection between the Serenity Prayer and the motto “It’s better to light one candle than to curse the darkness.”

He concluded, “I think they go hand-in-hand, and that’s why I’ve always been attracted to the mission of The Christophers, of inviting people to take on their own mission in this world. The Christophers have for many, many years invited us to be at our best, to lead with mercy, to make a difference in this world and to do it in a positive way by lighting a candle instead of sitting back and saying, ‘The world is coming to an end!’ It might be, but you know what? All of our lives are gonna come to an end in 30, 40, 50, 60, 70, or one year from now. I think the message of The Christophers – go light a candle- is gonna make [the world] during those years, for us and for others, a much better, happier place.”

(To hear my full interview with Father Jonathan Morris, click on the podcast link:) 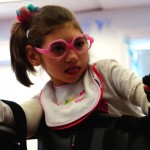 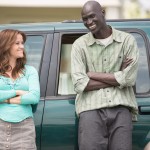 December 16, 2014 UPDATE: WIN A FREE COPY of "The Good Lie" starring Reese Witherspoon
Recent Comments
0 | Leave a Comment
"What was the name of the gentleman you were speaking to on CHristopher Closeup Sunday ..."
Katie Raggio Hossley Jimmy Kimmel Deserves an Emmy For ..."
"What a great article! Always loved the chracter and how it was developed from the ..."
Rick Malloy, S.J. The Catholic Church (and the Jesuits) ..."
"I loved the show and Father Francis John Patrick Mulcahy S.J played by the actor ..."
Fr.Ed Wade,CC The Catholic Church (and the Jesuits) ..."
"What a great tribute to a fine actor. As a Catholic I was never more ..."
RajunCajun The Catholic Church (and the Jesuits) ..."
Browse Our Archives
get the latest from
Catholic
Sign up for our newsletter
POPULAR AT PATHEOS Catholic
1

Another Word on the Tragedy of...
Steel Magnificat
Related posts from Christopher Closeup