Michael W. Smith on Christmas, His Dad’s Dementia, and His Concert of Peace in Bahrain

Michael W. Smith on Christmas, His Dad’s Dementia, and His Concert of Peace in Bahrain December 9, 2014 Tony Rossi 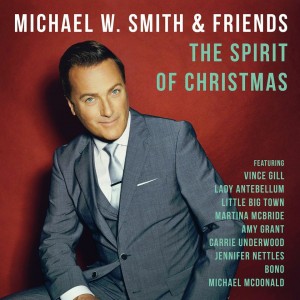 “All is well, all is well / Angels and men rejoice / For tonight darkness fell / Into the dawn of love’s light.”

Those are the opening lyrics of three-time Grammy Award winner Michael W. Smith’s song “All is Well,” which is featured on his new album “The Spirit of Christmas.” The project consists of duets with popular singers like Martina McBride, Jennifer Nettles, and Carrie Underwood, who joins Smith on “All is Well.” Though he co-wrote the song many years ago, it’s a message that he returns to often for comfort — one that’s even displayed in his parents’ home — because his father is now suffering from dementia.

During an interview on “Christopher Closeup,” Smith said, “Every day when I’m over [my parents’ house], I’ll ask, ‘Hey Dad, what does that say over the chimney?’ My dad will say, ‘All is well, all is well.’ So that’s sort of become our motto during this chapter of our lives. I watch my kids and grandkids get these magical, amazing feelings [about Christmas]. Then there’s watching my mom and dad get old, so it’s an interesting chapter. But God is good and all is well at the end of the day.”

Smith credits his parents with keeping him grounded in the true spirit of Christmas when he was growing up. He recalled, “We were very plugged into our church, and did a lot of things during the season that were very intentional about helping other people. We’d take food to an old folks’ home, we’d go to a retirement center. My mom and dad always used to say, ‘Don’t forget what this whole thing’s all about.’ And we found ourselves trying to really give during that season – and we still do. We’ve passed that on to our kids now.”

Smith has been focused on giving for so much of his life that he was named Nashville’s 2014 Outstanding Philanthropist for his Rocketown outreach ministry, which he created in 1994 to help local youth find “peace, purpose, and possibilities” while grounded in “Christ’s love.”

Though Smith has the financial resources to help others in a special way, he’s learned that money is not a requirement to do good: “You have the opportunity to change somebody’s life. And the need’s great. You don’t have to cross the pond and be a missionary. There’s a kid who’s got a drug addiction who needs a mentor. There’s all these kids who come to Rocketown. We’ve got a girl, Tricia – her mom’s a prostitute and her dad’s in jail, and Rocketown’s become a home for her. There’s just all kinds of ways to make a difference, and everybody has a chance to do that.”

In addition, Smith still finds time to record music and tour. He even got the most surprising invitation of his life this year: “Somehow a Hindu, a Catholic, a Protestant, and a Jew all formed this committee [in Bahrain in the Middle East] and wanted me to come do a concert of peace.”

He recalled, “I need to write a book about that experience. It was unbelievable. There were probably 100 miracles that took place for me to even come. It was very, very shocking when I got the request that I’d been invited to Bahrain and been cleared by the king. Because everything has to go by the king. I got approved and I went in, and I tell you what – it was one of the most memorable shows of my entire career. I met everybody on that committee and they genuinely, I think, really love each other, and they want to live in peace, and they don’t want any blood shed on their streets, and they’ve learned how to live together. They can agree to disagree. We believe this, you believe that. They don’t become radical about it to the point of taking somebody else’s blood. Somehow they’ve figured out a way to live peacefully together. So I will never forget it the rest of my life.”

Living peacefully together is an ideal Christmas message reflected on the album’s spoken-word performance of an old Irish carol called “The Darkest Midnight” by U2 lead singer Bono. They reflect Smith’s understanding of this holy day, so I’ll share the lyrics here as a closing Christmas wish:

“The darkest midnight in December / No snow nor hail nor winter storm / Shall hinder for us to remember / The babe that on this night was born. / With shepherds we are come to see / This lovely infant’s glorious charms. / Born of a maid as the prophets said / The God of love in Mary’s arms. / Ye blessed angels join our voices / Let your gilded wings beat fluttering o’er / While every soul set free rejoices / And every one now must adore. / We’ll sing and pray that God, as always / May our friends and family defend. / God grant us grace in all our days / A Merry Christmas and a happy end.”

(To listen to my full interview with Michael W. Smith, click on the podcast link:)

And here’s video of Michael singing “All is Well” with Carrie Underwood on the CMA’s “Country Christmas” special: 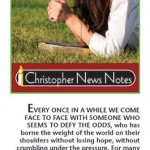 December 10, 2014 Last Christmas I Gave You Some Socks, But the Very Next Day You Gave Them Away
Recent Comments
0 | Leave a Comment
Browse Our Archives
get the latest from
Catholic
Sign up for our newsletter
POPULAR AT PATHEOS Catholic
1