When “Blessed Assurance” Came to Washington

Ninety-one-year-old actress Cicely Tyson was one of the honorees at the 2015 Kennedy Center Honors (along with George Lucas, Carole King, Seiji Ozawa, and Rita Moreno). Tyson’s tribute by fellow performers brought a touch of Christianity to the proceedings because of the actress’s love of the hymn “Blessed Assurance.” She performed it as part of her Broadway role a few years ago in “The Trip to Bountiful,” and it proved so engaging that audience members started singing along.

CeCe Winans performed “Blessed Assurance” at the Kennedy Center Honors and people sang along as well, including Tyson who’s got the exuberance of a 20 year old.

Here’s part of the tribute and the performance. 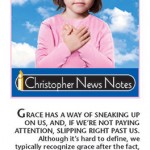 January 8, 2016 "May the Force Be With You" Had a Christian Influence
Recent Comments
0 | Leave a Comment
Browse Our Archives
Follow Us!

A Letter from the Desert
Pascal once said that most of our problems as human beings stem...
view all Catholic blogs
What Are Your Thoughts?leave a comment
Copyright 2008-2020, Patheos. All rights reserved.