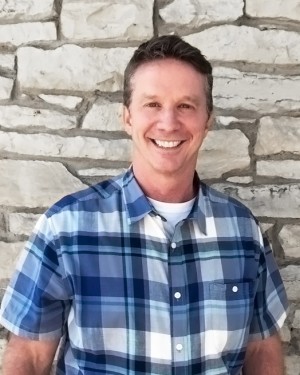 At the same time, he shuns any self-praise because he believes this is something that all of us can do. That message is clear in his powerful memoir “Pint-Sized Prophets: Inspirational Moments That Taught Me We Are All Born to Be Healers.”

As a child, Dietzen and his siblings were exposed to children in need because their parents took in approximately 150 foster children over 20 years – and even adopted two of them: Vince and Connie.

It was the 1970’s, and Vince suffered from hemophilia. When Dietzen’s dad discussed the possible adoption with the family, he explained, “It may take every bit of money I make to keep him alive.” Everyone – even the kids – agreed that whatever sacrifices may be called for, it would be worth it to save Vince and give him a good home.

It might seem unusual for the selflessness in a family to run so deep, but this family was Catholic. And as Dietzen told me during a “Christopher Closeup” interview, “My parents didn’t preach giving and caring for others. They demonstrated it on a regular basis…Children learn what they live. Thankfully, my parents had a great home for us to practice what we were learning on Sunday.”

The Catholic faith is also what exposed Dietzen to St. Francis and his love of animals. The saint made him want to be a veterinarian, though that dream eventually morphed into him pursuing a medical career in pediatrics.

After returning home from college during his sophomore year at Purdue, Dietzen’s parents were fostering a victim of child abuse. He said, “It hit home with me that I’m concerned about animals and nature, as St. Francis was, and the future of the world. But so much of that depends on the future of our children. They’re very vulnerable, and we need to be protecting them, educating them, and seeing that they get an opportunity to develop.”

Dietzen’s interest and background in sports led him to physical rehabilitation as a specialty, working with kids who are disabled. His mission expanded even more in 1997 after an encounter with Mother Teresa during a trip to India. Before meeting her and the other Missionaries of Charity, he recalled thinking, “These are extraordinary people, I can’t possibly do what they do!” But after spending time with Mother, which Dietzen calls the highlight of his life, he discovered the importance of simply being ordinary.

He said, “That’s one of the chapters in the book: Be ordinary. But have an extraordinary mission. Mother understood that. As she sat and talked with us for a good amount of time, what she encouraged us to do was to never leave the bedside of our patients, particularly those that we could not cure. Remain there as hope for them, which of course in my specialty, that rings loud and clear because we are not going to cure the children of the impairments they have. They will typically be left with those for a lifetime. But how do we give them hope in spite of that?”

That experience prompted Dietzen to ask himself, “Why did God put me here?” The answer he came up with was, “I’m here to save every child I can, do what I can to relieve suffering. But the other part of that is revealing to others that we weren’t all born to be doctors and nurses, but we were all born to be healers.” 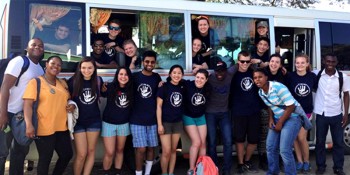 Soon after, Diezten founded Timmy Global Health, named after his brother who died a few days after birth. The group supports and encourages high school and college students, making them part of the mission to bring healthcare to those in need around the world. “We organize trips,” said Dietzen, “to different areas in the United States and abroad, where they can serve those individuals and, at the same time, discern how they can become community leaders and make a contribution to humanity and making the world better.”

Often, young people with disabilities are part of Timmy Global Health’s team, and their mere presence makes a powerful difference. Dietzen explained, “In many of the countries we visit, children with disabilities are automatically put into orphanages, whether they have parents or not. But to bring a child along who has a disability [can be life-changing]. We had [an] 11-year-old on the board of Timmy years ago: an outstanding young man, David Santangelo, here in Indianapolis. He was along in Ecuador when a mother said to me, ‘My son will never walk.’ I said, ‘Oh no, he will.’ And so I opened the door and invited David in. He pulls up his pants legs and reveals his leg braces. You can imagine the power of that on that mother. She’s not just hearing me, she’s seeing [proof] in a young man who can walk, and who is traveling abroad and changing the world for the better.”

Not all cases have happy outcomes, though, and that was one of Dietzen’s greatest fears before entering the medical field. He said, “I remember thinking that it didn’t seem fair that children don’t get to live out their lives. That was one of my great fears about becoming a doctor: how would I survive children dying? And then ultimately, ironically enough, I became the medical director of pediatric hospice for St. Vincent Hospital in Indianapolis. There I was, doing the kind of work that I’d feared the most. But it was so revealing to me in how positive it was to improve my own faith and to help me see that Jesus is eternal. When you take care of children who’ve come back, who’ve died, been resuscitated and come back and they say, ‘I met Jesus and here’s what He said’ – that gets your attention. That’s the sort of thing that I am trying to impress upon people, that there is a very good reason to be living your faith, that these little spiritual heroes will underline that for you. If you have any questions about what’s to come at the end, talk to them.”

The power of relationship is one thing Dietzen believes is being lost in the modern healthcare system. He laments the fact that we are “strangling the ‘care’ out of healthcare” with “all the documentation, litigation, regulation, and legislation.” 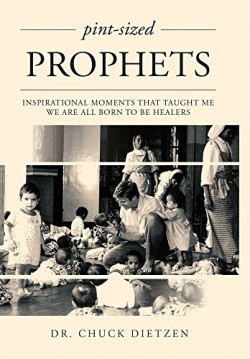 For Dietzen, however, he remains focused on the connections he forms with his patients, who, as his book title states, are “Pint-Sized Prophets.” He concludes, “I think the beauty of this work is when you allow yourself to get close enough to these kids, your heart will be broken and, at the same time, healed, if you actually allow that to happen. What you discover is the spiritual part of this life. Body image, physical ability disappears. The connection is so remarkable when you’re around these gurus. They have the most important mission of all of us. They’re not the fastest, they don’t throw the hardest balls. They’re not incredible mathematicians or movie stars, that sort of thing. What they are though, they are incredible souls who were sent here to make us better, to make us more compassionate, to make us more kind, to make us more human.”

(To listen to my full interview with Dr. Chuck Dietzen, click on the podcast link): 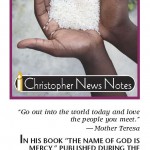 October 26, 2016
Leadership in Mercy: The Power of Mercy on Our Lives
Next Post 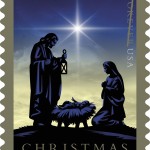