A Radical Vision for a New Generation

Patheos Explore the world's faith through different perspectives on religion and spirituality! Patheos has the views of the prevalent religions and spiritualities of the world.
“‘In the last days, God says, I will pour out my Spirit on all people. Your sons and daughters will prophesy, your young men will see visions, your old men will dream dreams.” – Acts 2:17

As ministers and educators, we hear a great deal from parents about the need to pass spiritual values on to our young people. But over the past few years, we’ve seen the young people of the world taking the lead in teaching Christ-like values of love, compassion, justice and mercy…and most of all, courage in speaking out against injustice, even at the risk (or cost) of their lives, as recently seen in Turkey where seven young protestors were killed at Gezi Park for standing up for their values and speaking truth to power.

And these young people are reaching out to build a new, inclusive and truly human culture that transcends the barriers of color, creed, class, and age. Rather than bowing to – or rebelling against – the perspectives of their parents and grandparents, this generation invites elders to dialogue, to create a matrix of shared wisdom.

To celebrate the leadership of these young people in creating a new, multi-generational vision of spiritual democracy, we are offering this excerpt from our upcoming book.

An excerpt from Occupy Spirituality: A Radical Vision for a New Generation
by Adam Bucko and Matthew Fox,
Published by North Atlantic Books,
copyright © 2013.
Reprinted by permission of publisher.

We believe that today’s younger generation, who started a global movement by camping out on Wall Street and its equivalents around the world and who are often choosing a road less traveled rather than joining the military-industrial-academic-prison complex—these people are prophets in our midst. They are putting human and ecological values ahead of rapacity and greed. They are leading often with silent witness and appeals to moral imagination rather than reptilian brain confrontation or anal-retentive political wish lists. They are angry, but they are committed to an alternative set of values that will put community ahead of survival of the few and the fittest. They are not only exercising their civil rights inherent in their citizenship, they are attuned to the spiritual overtones of our times.

We wrote Occupy Spirituality [release scheduled 9/3/2013], to encourage them and to hopefully assist these young adults in their spiritual path, a path that combines contemplative quieting of the reptilian brain with the moral outrage that so many people are feeling today. This marriage of contemplation and action, mysticism and prophecy, is greatly needed in our time, and they are leading far more than our often tired and dried-up political and religious systems and institutions. Proof of the depth of their protest and spirituality is their courage—whether in Cairo or Libya, New York City or Tunisia—they have been willing to make sacrifices for the values they believe in, those they choose to deepen and to share. We honor them for that. We believe courage is the first sign of spirit at work.

It is our experience, in interviewing dozens of young people and in studying the surveys we distributed widely and in working with young people, that moral imagination is on the rise. A growing number of young people are living in community—a choice that begins with an economic survival motive but usually evolves into a sharing of values, ranging from gardening to friendship; conviviality to common cooking; part-time work that mirrors one ’s real values, with time for meditation and spiritual practice and political protest—we find many young adults are people with their imaginations in overdrive. They are not wilting before the onslaught of the adultism that rules our institutions from Wall Street to Washington, from media powerhouses to the Vatican. They are beginning to create their own societies. As one twenty-two year-old woman put it, having escaped from fundamentalism when she was fourteen years old, “my generation is aching for a living spirituality.” One might call this the “aching generation” as well as the Occupy generation. But it is a spiritual quest they are on as much as a political quest. It is the task of mentors and elders to join forces with them. 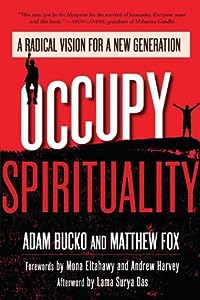 to heed the teaching of Walt Whitman, who first coined the term “spiritual democracy.” He writes especially to the young:

“The people, especially the young men and women of America, must begin to learn that religion, (like poetry,) is something far, far different from what they supposed. It is indeed too important to the power and perpetuity of the New World to be consign’d any longer to the churches, old or new, Catholic or Protestant—Saint this, or Saint that. It must be consign’d henceforth to democracy en masse, and to literature. It must enter into the poems of the nation. It must make the nation.”

Today we are thinking and acting beyond just “the nation” to the species and beyond our species to the Earth itself. But the issue of “spiritual democracy” remains the same. Our hearts and minds, bodies and imaginations, must be consigned to democracy en masse and to literature entering the poems and, therefore, the heart of all nations and all places.

Pancho Ramos-Stierle is twenty-six years old and was arrested at Occupy Oakland while meditating. Modern poverty, he says, boasts “two kinds of slaves: the intoxicated—the prisoners to the addiction of consumption, and those who aspire to get intoxicated—the prisoners of envy. . . . We ourselves must be strengthened and changed, for we have to experience an inner independence even before the corporations, police states, and governments grant the outward one. . . . We really need to step up as citizens of the world.”

What does it mean to Pancho to be an Occupier? “We are the early adopters of a revolution of values, and we are the evidence that the totalitarianism of corporate capitalism—the machine that has devastated the planet and human beings—we are the demonstration that system doesn’t work and that we need a new system.”

Pancho sees the issue as a marriage of spirituality and activism:

It is time for the spiritual people to get active and the activist people to get spiritual so that we can have total revolution of the human spirit. Because we have the idea that the self-indulgent people are just meditating—they are going to caves and meditation centers while all this madness is happening or you have people at these meditation centers that are asking how can you bring peace and calm and harmony to the world if you do not have that in your heart?

I think that we need both now, and that we need to combine this inner revolution with the outer revolution to have the total revolution of the spirit. Then you can build the alternatives to a collapsing system built on structural violence.

Are we up to the task? This we know: it cannot be accomplished without the generosity and imagination and hard work and courage of the young. Howard Thurman offered this observation about young people:

“Youth is a time of soaring hopes, when dreams are given first wings and, as reconnoitering birds, explore unknown landscapes. Again and again a man full of years is merely the corroboration of the dreams of his youth. The sense of fancy growing out of the sense of fact— which makes all healthy personalities and gives a touch of romance and glory to all of life—first appears as the unrestrained imaginings of youth.”

To immerse in the leading-edge wisdom and transformational spiritual practices of Matthew Fox, Andrew Harvey, and their guest speakers again and again: order the complete recordings of the Christ Path Seminars.

August 5, 2013 What Are the False Gods of Our World?
Recent Comments
0 | Leave a Comment
Browse Our Archives
Follow Us!

Our Conversation with Death
Everyone who lives is called to be in conversation with Life and...
view all New Visions blogs
What Are Your Thoughts?leave a comment
Copyright 2008-2020, Patheos. All rights reserved.