How To Pray The Rosary In Latin

In my experiences, it took me a number of years before I learned to appreciate the meditative qualities of the rosary, which I have written about in a separate article. But after returning to Catholicism, I’ve realized I have much to catch up on, even though it was something I grew up with. One of the things I noticed is there is an increasing push for returning to traditional roots and practices — and one of these involves the use of the Latin language.

Over the Lenten season this past year, I made an effort to learn to recite the entire rosary in Latin. Admittedly, I had only completely memorized the Sign of the Cross and the Hail Mary prayer during that time, since I’ve found them to be the easiest ones to recite. But for someone like myself whose only language is English, I would say it’s a start!

There is something truly organic about praying in a different language. Although this is only something I’ve been pushing myself to do (not something that’s required of anyone), familiarizing myself with Latin prayers has also helped my understanding of certain words in English that are rooted in Latin as well. It has also helped me pick up on certain words and phrases spoken during the liturgy of the Tridentine Mass.

For those of you who want to test your linguistic skills through reciting the rosary, I’ve laid out the standard rosary prayers in English paired with the root Latin in red.

In nomine Patris, et Filii, et Spiritus Sancti. Amen.
In the name of the Father, and the Son, and the Holy Spirit. Amen.

Credo in Deum
I believe in God,
Patrem omnipotentem,
the Father Almighty,
Creatorem caeli et terrae;
Creator of heaven and earth,
et in Iesum Christum, Filium eius unicum, Dominum nostrum;
and in Jesus Christ, His only Son, our Lord,
qui conceptus est de Spiritu Sancto,
who was conceived by the Holy Spirit,
natus ex Maria Virgine;
born of the Virgin Mary,
passus sub Pontio Pilato,
suffered under Pontius Pilate,
crucifixus, mortuus, et sepultus;
was crucified, died and was buried;
descendit ad inferos;
He descended into hell;
tertia die resurrexit a mortuis;
on the third day He rose again from the dead;
ascendit ad caelos,
He ascended into heaven,
sedet ad dexteram Dei Patris omnipotentis;
and is seated at the right hand of God the Father Almighty;
inde venturus est judicare vivos et mortuos.
from there He will come to judge the living and the dead.
Credo in Spiritum Sanctum;
I believe in the Holy Spirit,
sanctam Ecclesiam catholicam,
the Holy Catholic Church,
sanctorum communionem;
the communion of Saints,
remissionem peccatorum;
the forgiveness of sins,
carnis resurrectionem;
the resurrection of the body,
vitam aeternam. Amen.
and life everlasting. Amen.

Pater noster qui es in coelis,
Our Father, who art in heaven,
sanctificetur nomen tuum;
hallowed be thy name;
adveniat regnum tuum,
thy kingdom come,
fiat voluntas tua,
thy will be done,
sicut  in caelo et in terra.
on earth as it is in heaven.
Panem nostrum quotidianum da nobis hodie,
Give us this day, our daily bread,
et dimitte nobis debita nostra,
and forgive us our trespasses
sicut et nos dimittimus debitoribus nostris.
as we forgive those who trespass against us.
et ne nos inducas in tentationem
And lead us not into temptation,
sed libera nos a malo. Amen.
but deliver us from evil. Amen.

Gloria Patri, et Filio, et Spiritui Sancto.
Glory be to the Father, the Son and the Holy Spirit,
Sicut erat in principio, et nunc, et semper,
As it was in the beginning, is now and ever shall be,
et in saecula saeculorum. Amen.
world without end. Amen.

Domine Iesu, dimitte nobis debita nostra,
Oh, my Jesus, forgive us our sins.
salva nos ab igne inferiori,
Save us from the fires of hell
perduc in caelum omnes animas,
And lead all souls to Heaven,
praesertim eas, quae misericordiae tuae maxime indigent.
especially those in most need of thy mercy.

Deus, cujus Unigenitus, per vitam, mortem et resurrectionem
O God, Whose Only-Begotten Son, by His life, death and resurrection,
suam nobis salutis aeterne praemia comparavit:
has purchased for us the rewards of eternal salvation:
concede, quaesumus; ut, haec mysteria sanctissimo beatae Mariae Virginis Rosario recolentes,
grant, we beseech Thee, that by meditating upon these mysteries of the most holy Rosary of the Blessed Virgin Mary,
et imitemur quor continent, et quod promittunt, assequamur.
we may imitate what they contain, and obtain what they promise,
Per eumdem Dominum. Amen.
through the same Christ our Lord. Amen. 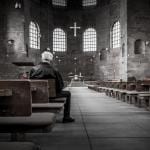 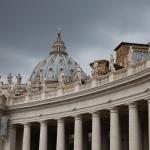 July 13, 2019 Why I Don't Call Myself A 'Roman' Catholic
Browse Our Archives
Follow Us!

Sufferings Are Nothing Compared To What...
The Pursuit of Holiness
Related posts from Coffee and Crucifix

Catholic
What Is The Definition Of A Cult?
Coffee & Crucifix
TRENDING AT PATHEOS Catholic

Use of Primary Citations: James Swan's Double Standards
. . . and his particular animus against the Austrian Jesuit and...
view all Catholic blogs
Copyright 2008-2020, Patheos. All rights reserved.