Why I Don’t Call Myself A ‘Roman’ Catholic

Since reverting to Catholicism after spending over a decade as an Evangelical Protestant, I’ve spent much time reevaluating my Christian worldview. One of the things I recall noticing in the Evangelical community is how the words or ‘Catholic’ ‘Roman’ seems to rouse people to raise their guards up.

Aside from major theological disagreements, I’ve found myself bothered by the flippant use of the terms Romanist, papist or even the abbreviation ‘RCC.’ Similarly, I find myself especially bothered when my fellow Catholics use the word ‘Protties’ as a sweeping generalization of Christians who do not subscribe to Catholic theology. While it may be seemingly trivial, I find the use of such language in both camps to come across as petty, passive-aggressive and self-righteous.

Many Catholics do not realize that Protestantism has many diverse schools of thought, some of which surprisingly share much common ground with Catholicism. Similarly, many non-Catholic Christians don’t realize Catholicism has several ‘rites’ which are based on cultural and geographical factors — all united under the umbrella of the pope, who plays the role of a temporal figure of unity until the day Christ returns.

Some would argue that if the Catholic Church were legitimately centered on Christ, it’s apostolic office would be in Jerusalem. Although the Church was founded by Christ in the Holy Land, many first-century Christians were driven out of Jerusalem when it was ransacked by the Roman Empire in 70 A.D. 1 Since then, the possibility of having Jerusalem as the location of their apostolic office has been particularly elusive. Though biggest reason why the apostolic office has been centered in Rome throughout the centuries is because Peter (the ‘rock’ whom Jesus founded the church upon) was believed to be martyred in Rome. 2

Nowadays, the word ‘Catholic’ is largely attributed to the Church of Rome due to historical animosity — hence the common title ‘Roman Catholic.’ Even self-identifying Catholics in the Roman rite use the title without ever thinking about what it really means. Prior to the Protestant Reformation and the East-West Schism, the thought of calling oneself a ‘Roman’ Catholic to distinguish themselves would not have crossed anyone’s minds at the time.

The word ‘Catholic’ derives from the Greek word katholikos (καθολικός), meaning ‘universal’ or more appropriately ‘according to the whole.’ While it may not found in the Bible, the earliest known use of the word was first used by one of the Early Church Fathers named Ignatius of Antioch,

Ὅπου ἂν φανῇ ὁ ἐπίσκοπος, ἐκεῖ τὸ πλῆθος ἤτω, ὥσπερ ὅπου ἂν ῇ Ἰησοῦς Χριστός, ἐκεῖ ἡ Καθολικὴ Ἐκκλησία.
“Wherever the bishop shall appear, there let the multitude [of the people] also be; even as, wherever Jesus Christ is, there is the Catholic Church.” 3

Even though our authoritative office happens to be in Rome, one of the reasons why I often refrain from using the adjective ‘Roman’ Catholic or the abbreviation ‘RCC’ is because it describes a specific rite rather than the Church as a whole. All the other rites are united under one umbrella, the One, Holy, Catholic, Apostolic Church — the Katholikí Ekklisía.

Personally I attend Mass in the Roman rite because it is what I am most familiar with. And because my family comes from a strong French heritage, it’s only fitting that I involve myself in a rite that reflects my cultural identity. Though once in a while I will attend a Divine Liturgy at a Ukrainian Greek Catholic parish, which is considered the Byzantine rite. While the liturgy may be slightly different, the Sacraments are still the same. 5

There was a time in history during a period of political unrest when the papacy resided in Avignon, France rather than Rome. 4 But the fact that the papal office was in a different location does not negate its validity. Moses and the Hebrews wandered the desert while carrying the tent used for worshiping the Holy of Holies, but their fluid location did not invalidate Moses as God’s chosen prophet. Similarly, if an event were to force the Pope out of Rome (such as a terrorist attack on the Vatican), it does not matter where the successor of Peter resides. 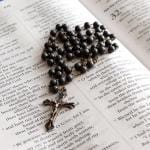 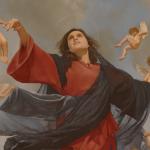 July 18, 2019 In Defense Of Mary's Assumption
Browse Our Archives
get the latest from
Coffee and Crucifix
Sign up for our newsletter
POPULAR AT PATHEOS Catholic
1