A Reflection on the Parable of the Good Samaritan

The first week of March was a pretty rough haul for me. In addition to battling sickness, I was assigned to a job site about an hour and a half out of town while the weather was still your typical Albertan winter. The periodic wind gusts exceeding 35 kilometers an hour made finishing the tin roof of an unfinished gazebo a task that required more caution that the usual times I’ve been sent out in the field. As I had to drive out to the nearest town to pick up some extra materials while my coworkers stayed behind to continue odds and ends, the roads on the way there and back were covered in snow drifts that were nearly a couple feet deep in some areas. Though I proceeded with caution and ensured that I wasn’t going over the speed limit, I had lost control on the highway on the way back to the jobsite after driving through a snow drift that was just thick enough that not even four-wheel-drive could save me. My truck spun 180 degrees and slid into the ditch, cushioned by 3 feet of snow and facing the direction I had just been driving from.

I’ve had my share of vehicle accidents in the past, so hitting the ditch didn’t shake me in the moment. With the sudden realization that I wasn’t going to make it back to the jobsite anytime soon, I immediately called for free towing service using my AMA membership. As I was talking on the phone with the operator, a snow plow suddenly appeared in the distance and started approaching as it was clearing the lane I had just been driving on. His blade began to scrape the asphalt bare while tossing the snow thirty feet into the ditch — roughly the distance I had been sitting! Surely, I thought, the snow plow driver was able to see me?! Just as I feared, the plow was approaching faster and faster until it doused my truck with slush, ice shards and particles of asphalt, burying my windshield so I can no longer see in front of me. I unloaded a lengthy, explosive barrage of angry cuss words as though I had accidentally cracked open Hell’s septic hatch, forgetting that I was still on the phone with the operator giving details of my situation and coordinates. She panicked and repeatedly asked if I was okay, to which I replied to her I was fine and explained that a snow plow had just buried me in passing. Nothing like being kicked while you’re down.

Since calling the tow truck, several vehicles passed by without stopping by to see if I was okay. Some passed while giving me confused glares and dirty looks as though they were thinking, ‘How could this guy possibly get stuck?’ Some didn’t even make any eye contact at all as though there was no large truck in the ditch. I knew it wasn’t the worst day to be stuck in the ditch since it wasn’t terribly cold out, and the tow truck was on it’s way anyway. Though with each passing commuter, I grew more and more disheartened. Are people really so self-focused as to not notice that I’m stranded in the ditch? What if I happened to be an older fellow going through cardiac arrest?

Finally, one middle-aged lady who was driving a Jeep Wrangler pulled over and rolled down her window, asking if I needed a hand. I told her the tow truck was on its way over shortly, to which she replied, “I have a winch!” Seeing that I had been waiting around for over an hour, I figured I might as well accept help from a stranger in the meantime. Although the woman’s jeep could not manage to pull me out of the 3-foot snowbank, she stuck around and kept trying until the tow truck arrived and pulled me out effortlessly.

The situation of being stuck in the snowy ditch reminded me of the Parable of the Good Samaritan, which reads as follows:

Jesus replied, “A man was going down from Jerusalem to Jericho, and he fell among robbers, who stripped him and beat him, and departed, leaving him half dead. Now by chance a priest was going down that road; and when he saw him he passed by on the other side. So likewise a Levite, when he came to the place and saw him, passed by on the other side. But a Samaritan, as he journeyed, came to where he was; and when he saw him, he had compassion, and went to him and bound up his wounds, pouring on oil and wine; then he set him on his own beast and brought him to an inn, and took care of him. And the next day he took out two denarii and gave them to the innkeeper, saying, ‘Take care of him; and whatever more you spend, I will repay you when I come back.’ Which of these three, do you think, proved neighbor to the man who fell among the robbers?” He said, “The one who showed mercy on him.” And Jesus said to him, “Go and do likewise.”
— Luke 10:30-37 RSV

Although they likely weren’t religious clergy, several of the commuters who passed me by while I was in the ditch probably also had places to be and important things to attend to — or they were probably wrapped up in their own minds thinking about the day ahead. Like the Good Samaritan, the woman in the Jeep chose to be present in the moment and attend to my needs while on her way to wherever she was going when she could have easily turned a blind eye like all the other commuters.

Being in a vulnerable position (thankfully not beaten or half-dead) made for an interesting observation which I thought was worth reflecting upon in how God works through those Good Samaritans of everyday life who partake in acts of mercy.

February 29, 2020
Scripture, Apostolic Succession and the Importance of Foundations
Next Post 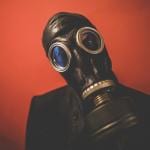 One Friday In Lent, The Papacy...
Thin Places
Related posts from Coffee and Crucifix