MIKE GENDRON: “And he must now receive sacraments. He must confess his sins to a priest which is the sacrament of penance. And then he must be rejustified by doing good works, by doing penance (Man on chart struggles as he ascends and descends on the chart). Then he must maintain his salvation through sacraments.”

The word ‘sacrament’ is a word used to summarize an act of faith, just like the word ‘Trinity’ is used to summarize how God exists in three persons, the Father, the Son, and the Holy Spirit. Protestants use a similar hermeneutical technique in establishing the Five Solas as inherently biblical. The Sacraments (Baptism, Penance, Communion, Confirmation, Matrimony, Holy Orders and Anointing of the Sick) all have their basis in Scripture, whether these men in the film realize it or not.

“Do you not know that in a race all the runners compete, but only one receives the prize? So run that you may obtain it. Every athlete exercises self-control in all things. They do it to receive a perishable wreath, but we an imperishable. Well, I do not run aimlessly, I do not box as one beating the air; but I pommel my body and subdue it, lest after preaching to others I myself should be disqualified.” — 1 Corinthians 9:24-27 RSV

“Therefore, my beloved, as you have always obeyed, so now, not only as in my presence but much more in my absence, work out your own salvation with fear and trembling; for God is at work in you, both to will and to work for his good pleasure.” — Philippians 2:12-13 RSV

NATE PICKOWICZ: “And if, in the end, if they have enough people praying for them, and if they do enough time in purgatory, they might possibly get to heaven.”

Again, this is a deceptive statement, which is evident in their lack of citation from Catholic sources. Purgatory is not a ‘deciding place’ whether or not a soul ends up in heaven or hell. The Bible states,

“And just as it is appointed for men to die once, and after that comes judgment.” — Hebrews 9:27 RSV

Souls in Purgatory have already passed judgment and are already saved in a state of grace. They undergo the final cleansing process that renders them into a new creation in a Christlike state. The Catechism of the Catholic Church states,

“All who die in God’s grace and friendship, but still imperfectly purified, are indeed assured of their eternal salvation; but after death they undergo purification, so as to achieve the holiness necessary to enter the joy of heaven.” — CCC 1030

“The Church gives the name Purgatory to this final purification of the elect, which is entirely different from the punishment of the damned.” — CCC 1031

See my articles Why Purgatory Makes Sense and Why I Pray For The Dead.

Mike, “How they get to heaven is based on what they do rather than what Christ has done.”

Wrong, as stated in the anathemas of the Council of Trent. The Catechism of the Catholic Church teaches that Jesus is the only way to heaven, just as Protestants do as well in accordance to Scripture,

“Faith in God leads us to turn to him alone as our first origin and our ultimate goal, and neither to prefer anything to him nor to substitute anything for him.” — CCC 229

NATE PICKOWICZ: “But the Bible teaches, ‘There is therefore now no condemnation for those who are in Christ Jesus (Romans 8:1).’ That when you put your faith in Jesus Christ the work has been done. (Person leaps through a cross and catapults to the top of the chart) He saves you totally, completely, perfectly. And even though yes, we sin and can repent, the sacrifice of Christ has paid for those sins. And so there is assurance that He has saved you, He has plucked you out of this world, you’re in the palm of His hand (person walks through heavenly gate) and nobody can pluck you out of his hand.”

In my article Once Saved, Always Saved?, I dive into the details of why assurance of salvation is actually unbiblical.

Mike, “And so that’s why the Reformers cried the Five Solas that we are saved by grace alone (Sola Gratia), through faith alone (Sola Fide), in Christ alone (Solus Christus), according to Scripture Alone (Sola Scriptura) all for the Glory of God alone (Soli Deo Gloria).”

If one were to do their theological homework, they would be surprised to realize Protestants and Catholics share a lot in common regarding 3 of the Solas: Christ Alone, Grace Alone and Glory to God Alone. The other two (Faith Alone and Scripture Alone) are where Catholics and Protestants tend to be in opposition the most.

See my articles (more to come yet!):
Scripture, Apostolic Succession and the Importance of Foundations
‘Faith Alone’ Is Not Enough
Does the ‘Bible Alone’ Put God In A Box?
A Contemplation of Soli Deo Gloria (Glory to God Alone)

R. SCOTT CLARK: “That message has always found opposition. And the Jerusalem Council that we read about in the Book of Acts, actually addressed this very same issue. The Rabbis and the Judaizers were saying to the Christians that God will accept you by His grace through faith and your keeping of the ceremonial laws (CITES ACTS 15:1), being circumcised, washing your hands, keeping the food laws. And the entire church agreed (CITES ACTS 15:11), summarized by the Apostle Peter’s statement (WE ARE SAVED BY THE GRACE OF THE LORD JESUS CHRIST), that is not the good news. That’s not the gospel. Jesus didn’t come to make salvation possible for those who do their part. He came to accomplish it, and to give it freely to all of His people.”

To compare the Jerusalem Council in the Book of Acts to the Protestant Reformation is what I call a false equivalency fallacy. The Reformation was the outcome of a series of isolated events that involved unchecked corruption, which eventually led civillians and political leaders to revolt. Since then, western Christianity has been in a state of perpetual schism, which some would argue is not the fruit of the Holy Spirit.

See my article: Why I Don’t Celebrate The Reformation (And Neither Should You)

NATE PICKOWICZ: “The question is, ‘Well, how do we know faith is real if there is no works? Doesn’t the Bible say, ‘Faith without works is dead? (CITES JAMES 2:26)’ And so, don’t we have to do works to be saved? Isn’t that the argument? Isn’t that what we have to be doing? But there’s two understandings of that, and one’s biblical and one’s not. So the Roman Catholic view of salvation, and really any works-based system of salvation, takes works and puts it at the root and says that works plus your faith in Jesus is what produces salvation. But the Bible teaches that it’s not the root, it’s actually the fruit. That your faith alone in Jesus, that is what saves. And then a life that has been saved is a sanctified, regenerated heart produces fruit – the fruit of good works. And so, you know a person has been saved because of their fruit, but the fruit is not the reason they’re saved. They’re saved by God, by grace, through faith in Christ.”

If one were to read two verses back, that very same book of the Bible states,

This is the only passage in the entire Bible where the words ‘faith alone‘ are shown together. It’s also one of the more controversial verses that Evangelical Christians either tend to gloss over or have a head-on collision with cognitive dissonance regarding how they believe the Scriptures are clear and conspicuous enough for the average reader to understand. It comes to no surprise that this verse was never even addressed in this film since this would require the filmmakers to actually read and understand the Catholic position or resort to mental gymnastics to explain away what ‘not by faith alone’ means.

This also raises some important questions about how the sins of individual born-again Christians are interpreted as ‘bad fruits’ among fellow believers, and whether God has the ability to work through the actions of non-Christians who seemingly produce better fruit than some Christians.

PAUL WASHER: “You see, the Christian is the only person, the true Christian, who can say that they’re going to heaven without being self-righteous. Why? In other religions, how do you get to heaven? You get to heaven by being good, by earning it. In Christianity, you’re not reconciled to God through your own virtue or merit, but you’re reconciled to God through the virtue and merit of His Son.

As stated previously, the Catholic Church does not teach that salvation is earned, but hinges on the grace of Christ in conjunction with the will of mankind to be open to that grace. But where many Evangelicals get hung up on is how much influence free will has in salvation. For those who subscribe to the Calvinist doctrine of Total Depravity (which seems to be the view the filmmakers subscribe to), free will is rendered nonexistent and everything (including acts of evil and where souls may go in the afterlife) is predetermined by God before the dawn of time. I’ve written an extensive critique of Calvinism for those interested in exploring that topic further.

I think the condescending tone displayed towards Catholicism in this film is revealing in itself of how some Evangelicals view themselves in comparison to Catholics (let alone non-Christians). Given the mindset of viewing oneself being already saved by faith alone, one would think that this would automatically make any Catholic under the umbrella of Christ by virtue of mere faith. Unfortunately, as shown later in the documentary, the filmmakers have made it abundantly clear that they consider Catholics one with the secular world and not to be unequally yoked with. If that isn’t considered a form of self-righteous behavior, then I don’t know what is.

In conclusion, I would recommend American Gospel to anyone who is looking for a solid critique of Prosperity Theology, but with an asterisk. Any Catholic who wants to watch this film ought to proceed with caution, with their Bible and Catechism on hand, ready to be challenged and to give an answer on their account. 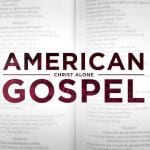 September 25, 2020 Four Reasons Why I Cancelled My Netflix Subscription
Browse Our Archives
Related posts from Coffee and Crucifix