Is Cancel Culture The New Inquisition?

A recurring theme that often comes up in your average Bible study is the verse from Ecclesiastes, ‘There is nothing new under the sun!’ What it means is, no matter what kind of trends or issues happen in the world, a similar occurrence has happened at some point in history. Whether it’s wars, genocide, corruption or revolution, the events we see nowadays often have parallels in the past. Nowadays, the latest trend that seems to catch the ire of social media is ‘cancel culture.’

What cancel culture entails is when someone has committed some kind of wrongdoing (whether it’s abusive behavior or bigoted worldviews) they are usually publicly called out and forced to recant their beliefs and change their behavior or face ostracization. Typically, cancel culture usually targets higher profile personalities like celebrities or politicians, but it has become a prominent habit among laypeople. And it pains me to write that I, myself, am not innocent of such behavior either.

What I find interesting is many people tend to look at historical events such as the Spanish Inquisition as an example of injustice that ought to never be repeated again. These events are often viewed as a black mark on Church history since there have been cases when people were falsely accused of heresy or witchcraft — and, as a result, suffered brutal torture and death such as being burnt at the stake. It is worth noting the number of casualties that have resulted from the Inquisition are often grossly exaggerated by anti-Catholic polemicists. Some claim that the numbers were well into the millions, which would seemingly exceed the actual population of Europe at the time. Regardless of the death toll, any form of genocide is a travesty that ought to be commemorated; and exaggerating or distorting facts in order to make a point only reinforces that two wrongs don’t make a right. But I think parallels can be drawn between the travesties that happened during the Inquisition and witch hunts to what we see in modern day cancel culture.

So a recent petition has been making its rounds throughout Catholic social media to cancel prolife activist Abby Johnson from speaking at the Catholic University of America (CUA) in Washington D.C. From what I gather, the university hosting the opportunity for Johnson to speak has specific rules about giving someone a public platform (for example, they cannot be partaking in any political activities that would compromise the values of the university). It is my understanding that Johnson has taken heat for participating in the Capitol riot in January, and for comments she made last summer about her adoptive son potentially being interrogated by police for being black. Whether she was sincere in her words or struggled to articulate her actual point, it was not well-received by her left-leaning critics as one could imagine. As someone who identifies as pro-life from womb to tomb, I’m not particularly fond of Abby Johnson’s attitude and behavior towards fellow Catholics. In fact, I find it to be rather abhorrent and a poor representation of what charitable Christian behavior ought to be like. But regardless of her public behavior, I don’t question her orthodoxy as a Catholic. It isn’t my place to weigh her qualifications as a Catholic because that judgment is reserved for God alone, since her ultimate judge is my judge as well. Like myself and every other imperfect Catholic out there, Abby Johnson is a member of the Body of Christ by virtue of her baptism, and nothing could cancel that.

It is my understanding that some of my fellow Patheos colleagues believe she flat-out rejects Catholic social teaching on issues such as racism and consistency in pro-life ethics. I’m not going to weigh in on whether she accepts or rejects specific teachings based on a few screenshots of tweets and conversations with limited context. But I think if people are going to publicly call out AJ based on how she handles issues of racism or her involvement in the Capitol riot, then Catholics ought to be consistent in their condemnation and include President Joe Biden on their list of people to cancel since his pro-abortion stance strongly contrasts Church teaching on the sanctity of life. But given that thought, maintaining such a vetting process on a large scale would seem to disqualify the vast majority of Catholics in North America from any public platform. Even between the rivalries among radtrads and progressives, Catholics and other Christians are quick to out each other at the first sign of nonconformity to their clique dynamics. As much as I try to avoid using the slippery slope analogy, I think this sort of mentality leads Catholics all around to eat their own kind.

This leads me to wonder (since many of my traditionalist friends sometimes complain the Church does not excommunicate people anymore), if cancel culture is the modern day inquisition sans the death penalty? I tend to think that most people nowadays look back at such things as something that ought to never be repeated again. But I think it’s worth reflecting on the possibility that, while we may believe mass doxing and genocide is wrong, it is possible that we could become the very thing we condemn — even if what we become is only a lite version of the real, greater evil.

This does not mean racism or other harmful behaviors ought to be dismissed. Even I, as a blogger and content creator, have exercised boundaries in blocking people whom I feel I wouldn’t want to associate with in real life. But when a person faces such damning allegations, it ought to be a moment where they clarify their actual position (if the allegations are false) or acknowledge their shortcomings and seek to make peace with their accusers. When it comes to any type of sin (whether it be racism or genocide), it doesn’t do any good to remain silent and allow it to linger. And in cases where a person is unrepentant, refuses to change their behavior or promote a certain harmful ideology, then maybe publicly calling them out might be warranted? This is why activists of any cause do what they do. The most charitable thing a pro-life activist can do to help women and unborn children is to expose what abortion really is and to offer support however way they can. Similarly, if racism did not exist, there would be no anti-racist activism. The dignity and intrinsic worth of the human person regardless of age, gender, race, ethnicity or stage of development in or out of the womb needs to be upheld — and that ought to include the way we respond to those we are most at odds with.

In Scripture, dealing with sin in the Church is usually dealt with personally first before it escalates into public knowledge:

“If your brother sins against you, go and tell him his fault, between you and him alone. If he listens to you, you have gained your brother. But if he does not listen, take one or two others along with you, that every word may be confirmed by the evidence of two or three witnesses. If he refuses to listen to them, tell it to the church; and if he refuses to listen even to the church, let him be to you as a Gentile and a tax collector. Truly, I say to you, whatever you bind on earth shall be bound in heaven, and whatever you loose on earth shall be loosed in heaven. Again I say to you, if two of you agree on earth about anything they ask, it will be done for them by my Father in heaven. For where two or three are gathered in my name, there am I in the midst of them.”
— Matthew 18:15-20 RSV

One of the things that separates Christianity from the rest of the world is the radical notion of being able to forgive multiple offenses. Matthew 18:21-22 says, “Then Peter came up and said to him, “Lord, how often shall my brother sin against me, and I forgive him? As many as seven times?” Jesus said to him, “I do not say to you seven times, but seventy times seven.” I would caution that being able to constantly forgive does not mean to constantly enable abusive behavior, but rather remove the power an oppressor would have over a victim. If we want the grace of Christ to free people from the cycle of hatred for their fellow humans, then love and forgiveness would be the antithesis of cancel culture.

I write this piece in hopes that Abby Johnson (if she happens to care enough to read this) will reconsider her public behavior and be more willing to listen to her critics within the Church. I also hope that President Joe Biden (as the devout Catholic he claims to be) will listen to the voices of the pro-life movement and consider all the economic and social factors that would make America a much more pro-life and pro-woman country that the world can imitate.

If cancel culture was originally meant to hold people accountable for their actions, then it is a complete misnomer. But if it is only meant to smear a person’s reputation or destroy their livelihood without hopes of them to change or repent, then it is essentially nothing more than a modern day witch burning. 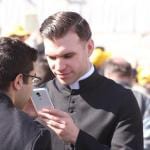