“Man, this is all so unprecedented!” says local activist Mitch Stryker while carrying a jerry can of gasoline on his way to Saint Michael’s Chapel. “It’s hard to believe all these church fires across the country are seemingly happening all at once! But there can be only one explanation for all of them…….CLIMATE CHANGE!”

“I mean, every year we see more and more forest fires lighting up whenever the weather gets hot for long periods of time!” continued Stryker as he poured gasoline all around the church wall perimeter. “We all know the global temperatures are rising, like, 50 degrees or something each year! I knew it was only a matter of time before buildings would follow suit. You gotta trust the science, you know.”

“All of what we’re seeing right now is the result of irresponsible human activity on a collective scale!” continued Mitch as he removed his COVID mask to light up a reefer and dropped it on the ground where several other discarded masks lay. “If people were smart, they should stop killing our planet with mass exploitation and destruction of our ecosystems!”

“And what’s worse, our entire country is built upon systems of oppression,” said Mitch as he tossed the joint onto the trail of fuel, causing the church to go up in raging flames. “As a white person, I recognize my privilege and I just want to do my part to stop the violence!”

Stryker fled the scene immediately after the church caught fire, but was soon arrested by local authorities who found him injured after an attempted parkour-style escape though a back-alley. The fire soon spread from the church onto the dry grass, which then ignited the neighboring trees and houses.

“It’s an utter travesty, this whole situation,” recalls Constable Oshawa after firefighters managed to control the blaze. “Not sure what was going through that kid’s mind, especially during a province-wide fire ban. He could have single-handedly burned down the entire county, let alone the nearby old-growth forest that is under federal protection!”

While under police custody, Mitch Stryker stated, “C’mon, man, I was only trying to lightly char the building just to make a statement, not light up the whole dang thing! It only comes to show you how dangerous climate change really is! If we don’t do something about it soon, the whole world’s gonna burn!”

Regarding the heightened emotions surrounding the residential school controversy that seemed to provoke church burnings across the country, Constable Oshawa responded, “My whole family has lived here for generations and my ancestors helped the settlers build the church that burned down. I know not everyone’s experiences were alike, and I know a lot of my own people who have suffered from immense prejudices that still linger to this day. But that doesn’t justify the horrific act that happened today. I hope we can all look to our Creator as a source of unity, comfort, healing and reconciliation in this difficult time.”

During his first court hearing, Mitch Stryker pleaded ‘not guilty’ of hate-motivated arson. 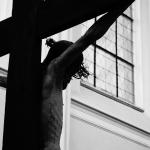 April 18, 2022 An Easter Reflection: Jesus Was A Victim
Browse Our Archives
Related posts from Coffee and Crucifix