This is not the St. Zoe I took as my Confirmation saint (and from where I get the name Zoe) but she’s cool even still! When her feast day comes around, you can be sure I’ll tell you about St. Zoe of Pamphilia and why I chose her over this Zoe. Until then, onward! 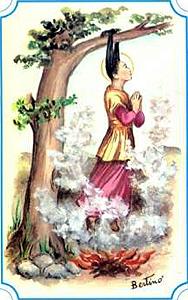 St. Zoe of Rome lived during the early stages of Emperor Diocletian’s persecution of Christians, around the 280s AD. She was a noble woman in the imperial court of Rome, married to a high Roman court official named Nicostratus. But even that status didn’t save her from Diocletian’s wrath.

Something miraculous that happened: for an unknown reason, Zoe couldn’t speak for six years. St. Sebastian (yes, that one) made the Sign of the Cross over her and she immediately began to speak and glorify God. Zoe was also greatly devoted to St. Peter (something she and I have in common!). Diocletian’s henchmen found her praying at his tomb one day and arrested her. They hung her from a tree branch by her hair and lit a fire underneath her. Zoe died of asphyxiation (not by burning to death). Then they threw her body into the River Tiber. Apparently, the symbolism of the Tiber was lost on Diocletian and his henchmen as “swimming the Tiber” is an analogy for converting to Catholicism and being thrown in the Tiber is a symbol of baptism.

The Eastern Orthodox Church venerates her, also, on a different day. Here’s a more detailed version of her story.

A little lesson in Greek, for extra fun: in Greek, zoë means life, as does bios. However! Bios refers to the biological life or physical and modal life. Zoë, on the other hand, refers to the spiritual life or a sense of transcendence. When Jesus said, “I am the way, the truth, and the life,” the word for life used was zoë. Pretty cool!

July 6, 2020 Seeing God in the Performance of Michael Jordan
Recent Comments
0 | Leave a Comment
"Nice article. It is also one of the most beautiful songs of Queen ..."
Module-t Prefabricated A Great Pretender
"Fr. Peter Grover, OMV, St. Clemens, Boston brought out in his homily today (on YT) ..."
Ravyn Guiliani Thomas the Apostle- July 3 (Everyday ..."
"It was interesting, I enjoyed it, thank youساندویچ پانل"
sandwichpanel Cinderella and St. Germaine Cousin
"GoT was "nihilistic" because it didn't pay lip service to your God? I can see ..."
Raging Bee Destruction of the Characters of Game ..."
Browse Our Archives
get the latest from
Catholic
Sign up for our newsletter
POPULAR AT PATHEOS Catholic
1