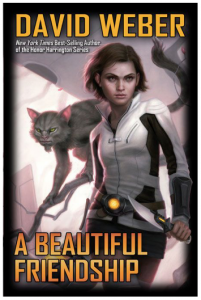 As readers of David Weber’s Honor Harrington series know, Honor Harrington is accompanied everywhere she goes by a telepathic treecat named Nimitz. Nimitz has six legs (two of which end in hands), a long tail, and a vaguely feline appearance, including retractable claws to die from, and usually rides on Honor’s shoulder. Treecats are native to Honor Harrington’s home planet of Sphinx, and individual treecats have been bonding with humans since about 50 years after Sphinx was colonized.

At one point Honor lets drop that one of her ancestors, a young lady named Stephanie Harrington, was the first human to bond with a treecat; and Weber tells her story in the short “A Beautiful Friendship” In the anthology More Than Honor. It’s a neat story; I like it.

And then, several years ago Weber launched the “Star Kingdom Series”, a collection of juveniles that are primarily about Stephanie Harrington and the early days of humans and treecats living together. The first is also titled A Beautiful Friendship

, and is by David Weber alone; the second and third are called Fire Season

, and are by Weber and Jane Lindskold.

Since I’d finished reading all of the other Honorverse books, I picked these up and gave them a try; and I have to say I enjoyed them. They aren’t perfect; as juveniles, they are a little too self-consciously juvenile for my taste, especially Weber’s solo outing. I’ve always maintained that the best juveniles are just like novels for adults, except that certain topics are avoided or glossed over; an adult should be able to read them with pleasure. Weber shows has a slight tendency to write down to his audience (Lindskold does rather better), and the plot structure is simpler than is his usual won’t. And of course, the books are short, so it’s kind of like popcorn. You finish one and you want the next immediately.

But all that said: if you’ve read the reset of the Honorverse and are looking for more, or if you really like treecats, you’ll enjoy this. And then, I passed them along to my 13-year-old daughter, and she devoured them. 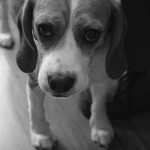 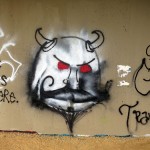 January 7, 2015 You Must Be Full of Demons
Recent Comments
0 | Leave a Comment
Browse Our Archives
Follow Us!

Abby Johnson and the Problem With...
Femina Ferox
Related posts from Cry 'Woof'