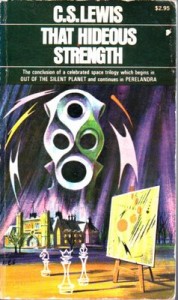 A couple of weeks ago, Pascal-Emmanuel Gobry posted about his first encounter with C.S. Lewis’ “Space Trilogy”: Out of the Silent Planet, Perelandra, and That Hideous Strength.  He devoured them, and I’ll take the liberty of abbreviating his comments thusly:

I commented that after having read them many times I value them in the opposite order: That Hideous Strength most, Perelandra next, and Out of the Silent Planet least.  He said that he’d heard that from others, and would be interested to hear my comments on it.  Consequently, I’m taking yet another week away from my Tour of Tim Powers to do that.

Most unusually, I’m not going to worry about avoiding spoilers; if you haven’t read the books then go read PEG’s review, and then be sure to read Perelandra despite it.

Out of the Silent Planet is, indeed, science fiction—though science fiction in the mode of H.G. Wells rather than anyone later, which means it might seem a bit alien to modern readers—and it differs from most science fiction in positing an active Christian theosphere.  That is, Christianity is simply true in the context of the book, as are certain genuinely medieval notions about the cosmos.

Lewis’ hero, a philologist named Elwin Ransom, is kidnapped and taken to Mars aboard an experimental spacecraft designed by a Professor Weston, there to be given to the alien Sorns for some nefarious purpose.  He escapes, meets the friendly Hrossa, and is eventually required to travel to the throne of Oyarsa, the ruler of the planet.  In the big reveal (spoilers!) he learns that Oyarsa is the angelic spirit whose duty it is to shepherd Mars around its orbit in proper medieval fashion, that Oyarsa serves Maledil (who is clearly the Second Person of the Trinity, now incarnate as Jesus Christ), and that the races on Mars were never subject to the Fall.  Earth is besieged territory, shut off from the heavens because of the actions of its own Oyarsa, who attempted eons prior to destroy life on Mars, and succeeded at bringing about the fall of man.  Earth so know to the people of Mars as the “Silent Planet” because there has been no communication with it.  It’s an audacious and intriguing notion, and one that comes as a great surprise.

Lewis was writing at a time when little was known about Mars and the other planets, and one could still reasonably write about Martians; and it was also a time when it was assumed in much of science fiction that mankind would conquer the stars and would bring a Wellsian secular humanism with them.  His great question was, is that really the right thing for us to do?  To export our wars and politics and brokenness to the heavens?  This theme appears in Out of the Silent Planet, but receives its full treatment in Perelandra.

Perelandra is a difficult work.  When I first read it one summer (I would have been in high school or early college) I slammed through it reading it just for the basic plot and found it horribly boring, much as PEG did.  I couldn’t leave it alone, though, and over the years I came to understand what’s going on with it.  I now find it as satisfying as a pair of old shoes.

First, Lewis is something of a mimic in much of his prose fiction; and in Perelandra he’s abandoned H.G. Wells’s Mars for David Lindsay’s Voyage to Arcturus. In Lindsay’s book the hero travels by mystical means to Arcturus where he roams about meeting a variety of peculiar people who have  even more peculiar ideas and physical capabilities; and only slowly do you realize that the travels and the descriptions are there merely to serve the progression of peculiar ideas rather than being the point.  It’s a novel about thought, and knowing, and ubermen, and is quite unlike anything else I’ve read—except, distantly, Perelandra.  But where the ideas behind Lindsay’s work are gnostic and ultimately incoherent, the ideas about Perelandra are Christian.

The premise is simple: there was no fall on Mars, though the Evil One nearly destroyed life there; there was a fall and a redemption on Earth; on Venus, a younger world yet, no fall has yet happened.  What would such an Eden be like?  And what choice might the Lady of Perelandra make once tempted?  In the event she is confronted with two men, Ransom and Prof. Weston, and the debating starts.  Which of them will persuade her? And how?

One of Lewis’ regular notions (it also appears in The Screwtape Letters) is that men of science, eschewing all belief in the supernatural, might find their way to studying and manipulating what they call “forces” but which are in fact demons; that they might become, in his phrase, “materialist magicians”, manipulating by means they do not understand entities that are using them to their own ends.  Weston is shown to have become one of these, and in the course of the novel is shown to have become possessed in truth.  It is the most chilling and plausible description of the demonic I’ve yet seen.

A detail that has always stuck with me: the devil has no interest in furthering goodness; and yet can’t help but use good things to achieve his ends, because pure Evil is simply nothing at all.  And so the possessed Weston uses reason as a tool to persuade the Lady away from virtue—and abandons it completely when the Lady is off-stage.

To PEG’s observations about Perelandra, then, I’d counter with the following: don’t read it as the adventures of Elwin Ransom, because he is no more than a supporting player in the drama; or for the thrills of the plot, for there are few; but read it slowly, as an extended meditation on evil, the good, and our human role in opposing the one and furthering the other.  Also, if Voyage to Arcturus is science fiction (of an admittedly antique and rarefied sort), then so is Perelandra.

That Hideous Strength carries these ideas still further.  Weston’s colleagues on earth are pursuing “science” according to his program, and working towards a take-over of Britain, which is to be run on “scientific” principles.  The action mostly takes place in the small college town of Edgestow, and though Ransom is present the viewpoint characters are Mark Studdock, a sociologist and newly elected fellow of one of the colleges, and his wife Jane.  The forces of science move into town in the form of the National Institute for Coordinated Experiments (N.I.C.E.), and Mark is invited to become a fellow of the N.I.C.E.  He is young, and not very wise (nor is Jane), and we get to watch as things in Edgestow begin to go quite literally to Hell, for the materialist magicians are in charge.

With this book Lewis’ muse changes again, and we have two new influences: Lewis’ own non-fiction work The Abolition of Man, and the Arthurian tales and poems of Charles Williams.  The result is a deeper, much less self-contained work than Out of the Silent Planet,  and a much more satisfying tale than Perelandra is on its face.  It is a book filled with allusions and catches of light that draw one in deeper and deeper.  Of the three, it best captures Lewis’ notion of joy, and most repays re-reading.

As to whether it’s science fiction: one of the classic themes of science fiction is the extrapolation of trends, colloquially put as, “If this goes on…”. Lewis began with intellectual trends current in his day (and not extinct in ours) and asked just that question.  It is, in part, fiction about the public doing of science; and even more it is about human nature and attempts to change it.  The natural moral law is as much a “law of nature” as the laws of physics, and attempts to suborn it will have their natural consequences.  But it is also an encounter between the materialist world view and the deeply supernatural medieval-Christian world of Lewis’ conceit; and as such it is the farthest thing from pure fantasy.  It is not a made up fantasy world; rather, it is the real world, containing things both visible and invisible and dialed up to eleven.  Like Perelandra, the book repays careful and slow re-reading.

In short, Out of the Silent Planet is precisely what it seems to be; there are no hidden depths.  Perelandra fails as a tale of wonder, but repays the patient reader; and That Hideous Strength is Lewis at his mythopoeic best.  And if they are not what one would normally call science fiction, well: the world we live is more complex than materialists think it is. 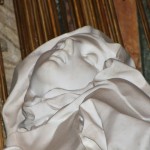 March 11, 2015 Third Orders Aren't First Orders
Recent Comments
0 | Leave a Comment
Browse Our Archives
get the latest from
Catholic
Sign up for our newsletter
POPULAR AT PATHEOS Catholic
1