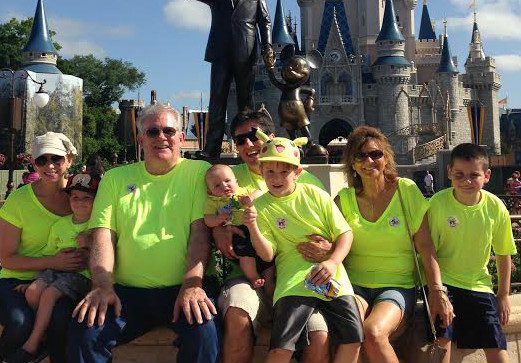 A few weeks ago when my family went to an amusement park. We had already paid a lot of money just to park the minivan in the parking lot, and now we were about to pay the inflated ticket prices at the park entrance. I was studying the sign and saw that said, “Children under age three admitted FREE.” Our son, Chandler, had just turned three years old a few days before. He’s small for his age and looks younger than three. The cashier looked at our kids and asked the question. “How old are the kids?”

I wanted to say, “Actually, all of them are toddlers. The big ones are just mutants who look exceptionally old, but they’re all under three years old. Two adult tickets, please.”

I knew that approach probably wouldn’t work, but I was completely confident I could get at least Chandler in for free. He just missed the cutoff by a few days, and nobody would know the difference. Besides, the park was already getting plenty of our money, so they wouldn’t need the extra cash.

I was having this argument in my mind and trying to justify telling a lie to save a little money, but then I looked at my kids and asked myself, What lesson do I want to teach them? Can I expect my kids to be honest with me about everything when I’m not willing to do the same? Do I really want to teach them that telling the truth is important, but it’s not as important as saving a little money?

Selective honesty is the same as dishonesty. I quickly came to my senses and paid the exorbitant ticket price, because the price of the ticket was much less expensive than what I would have given up in terms of my integrity and credibility with my kids. The truth might be expensive at times, but it’s always worth it.

The biggest mistake in parenting happens when we teach our kids to do something with our words but then we do the opposite with our actions.

Our kids learn from our example much more than they learn from our rules. I made the right choice in this situation, BUT I’ve made the wrong choice SO many times and in so many ways. I want to do better, because there’s so much at stake! Let’s all resolve to be parents who consistently teach AND model the character traits we want our kids to have.

This story was originally shared in my new book The Seven Laws of Love: Essential Principles for Building Stronger Relationships.

IF THIS POST ENCOURAGED YOU, PLEASE SHARE IT USING THE LINKS BELOW SO WE CAN ENCOURAGE OTHER TOO!

February 22, 2016 3 ways to instantly improve your marriage
Recent Comments
0 | Leave a Comment
"Great article.... I would like you to expound on 2 words in the following:If he’s ..."
KimDLynD50 12 things a husband should do ..."
"When times are hardest the thing to remember is that a just and merciful god ..."
rationalobservations? 5 Things God Wants You to ..."
"In My Concept, Wedding Ring are Important Thing and its a symbol of eternity. https://bit.ly/37dxpPR"
Praveen Raj 8 Ways to You Might be ..."
"I AGREE"
Praveen Raj 8 Ways to You Might be ..."
Browse Our Archives
get the latest from
Family
Sign up for our newsletter
POPULAR AT PATHEOS Family
1

The 9 Most Common Questions About...
Dave Willis
Books by This Author Books by Dave Willis

Expert Tips On Rebuilding Trust After Infidelity
Rebuilding a relationship in the wake of infidelity — whether romantic, emotional...
view all Family blogs
What Are Your Thoughts?leave a comment
Copyright 2008-2020, Patheos. All rights reserved.