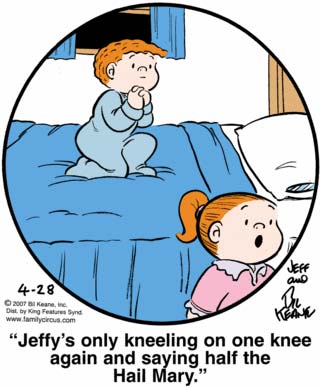 The legendary creator of the popular comic “Family Circus” — who never shied from bringing his Catholicism to the fore, as shown above — has gone to the great drawing board in the sky:

For more than a half century, Bil Keane’s clever “Family Circus” comics entertained readers with a mix of humor and traditional family values, intentionally simplistic because the author thought the American public needed the consistency.

Keane, who started drawing the one-panel cartoon featuring Billy, Jeffy, Dolly, P.J. and their parents in February 1960, died Tuesday at age 89. His comic strip is featured in nearly 1,500 newspapers across the country.

Jeff Keane, his son, said his father died of congestive heart failure. Bil Keane has a home in Paradise Valley, near Phoenix, but it was not immediately clear where he died.

Keane said in a 1995 interview with The Associated Press that the cartoon endured because of its consistency and simplicity.
“It’s reassuring, I think, to the American public to see the same family,” he said.

Although Keane kept the strip current with references to pop culture movies and songs, the context of his comic was timeless. The ghost-like “Ida Know” and “Not Me” who got blamed for household accidents were staples of the strip. The family’s pets were dogs Barfy and Sam, and the cat, Kittycat. 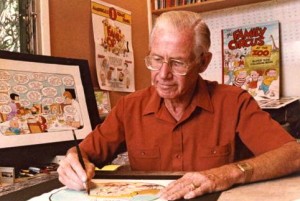 “We are, in the comics, the last frontier of good, wholesome family humor and entertainment,” Keane said. “On radio and television, magazines and the movies, you can’t tell what you’re going to get. When you look at the comic page, you can usually depend on something acceptable by the entire family.”

His friend Charles M. Schulz, the late creator of “Peanuts,” once said the most important thing about “Family Circus” is that it’s funny.

“I think we share a care for the same type of humor,” Schulz told The Associated Press in 1995. “We’re both family men with children and look with great fondness at our families.”

November 9, 2011
"Communion under both kinds is...encouraged and is expected to be the norm"
Next Post

November 9, 2011 Deacon Robert Jergovic update
Recent Comments
7 Comments | Leave a Comment
"I think I would have been happier had the CDF handled the nuns the way ..."
Theodore Seeber Vatican challenges “interpretation” of cardinal’s remarks ..."
"Blaming "Islamics" for this is like blaming the Pope for the Holocaust Denial of Hutton ..."
Theodore Seeber One killed, 44 injured in Catholic ..."
"It smacks to me of hyper-sensitivity, a veiled spiritual and intellectual pride, with regards to ..."
J D Pope Francis: “A Christian who complains, ..."
"Oh, no, we never change our mind, and we always agree, even on points of ..."
Ron Chandonia Vatican challenges “interpretation” of cardinal’s remarks ..."
Browse Our Archives
Follow Us!

12 Amazing March for Life 2020 Signs &...
Thousands and thousands arched on Washington today to protect the right to...

Are you happy with your local parish? and...
Regular readers will by now be used to the fact that I...
view all Catholic blogs
What Are Your Thoughts?leave a comment