That’s the sentiment of Bishop Patrick McGrath of the Diocese of San Jose  who, breaking with recent trends in other parts of the country, has issued a statement for his own diocese: 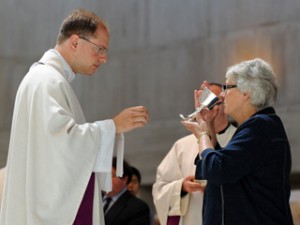 In light of recent statements by the bishops of the Dioceses of Phoenix and Madison regarding the limited use of Holy Communion under both kinds, I would like to take this opportunity to clarify our normative practice in our own local Church.

In the Diocese of San Jose, Communion under both kinds is permitted whenever it may seem appropriate to the Priest to whom a community has been entrusted, provided that the conditions set in the General Instruction of the Roman Missal, 283, have been satisfied, namely:

Because I firmly believe that all of our parishes and worshipping communities have met the above conditions, I want to reiterate that in the Diocese of San Jose, Communion under both kinds is not only permitted but also encouraged and is expected to be the norm at every Sunday and feast day Mass.

As I said in my June, 2003, letter establishing this as a norm for our diocese, I echo the Church’s encouragement of the laity’s sharing in the Precious Blood at Mass:

“Since, however, by reason of the sign value, sharing in both eucharistic species reflects more fully the sacred realities that the Liturgy signifies, the Church in her wisdom has made provisions in recent years so that more frequent eucharistic participation from both the sacred host and the chalice of salvation might be made possible for the laity in the Latin Church” (Norms for the Distribution and Reception of Holy Communion Under Both Kinds in the Dioceses of the United States, 11).

Furthermore, I firmly believe the Church’s teaching that:

“Holy Communion has a fuller form as a sign when it takes place under both kinds. For in this form the sign of the Eucharistic banquet is more clearly evident and clearer expression is given to the divine will by which the new and eternal Covenant is ratified in the Blood of the Lord, as also the connection between the Eucharistic banquet and the eschatological banquet in the Kingdom of the Father” (GIRM, 281).

Meantime, the USCCB has reiterated that the new norms for the Mass do not discourage communion under both kinds.

New guidelines for Mass celebration do not discourage lay persons’ reception of Holy Communion under the forms of both bread and wine, contrary to early reports about a change in practice.

“In recent weeks, there have been questions regarding current liturgical law for the United States in offering Holy Communion under both kinds to the faithful during Mass,” wrote Archbishop Gregory M. Aymond, chairman of the U.S. bishops’ Secretariat for Divine Worship, in an Oct. 26 letter to the country’s Catholic hierarchy.

“In light of these questions,” he stated, “it is hoped that the following clarifications will prove helpful.”

The letter goes on to explain that the 2011 General Instruction of the Roman Missal does not restrict the circumstances under which the lay faithful may receive communion under both kinds. In fact, the new norms encourage the practice, while giving local bishops freedom to expand or restrict it.

“Each diocesan bishop may establish norms for Holy Communion under both kinds within his diocese,” Archbishop Aymond stated, explaining provision 283 of the Mass guidelines released in June 2011.

That provision states that “the diocesan bishop is also given the faculty to permit communion under both kinds whenever it may seem appropriate to the priest to whom a community has been entrusted as its own shepherd.”

Numerous news articles incorrectly reported that the Third Edition of the Roman Missal had “reduced the number of times—14 down to 3—when the chalice could be offered during Mass within the U.S. Church.”

That reports claimed that the new Mass instructions would “allow the chalice to be offered during Mass in only three instances or at the discretion of a parish priest.”

In fact, the new edition of the Missal does encourage bishops and their priests to offer the chalice under three particular circumstances. However, its new norms do not “reduce” or restrict the circumstances under which the faithful may potentially receive communion under both kinds.

November 9, 2011
Further proof that God loves us and wants us to be happy
Next Post

A Eulogy for the March for Life
I have tried so hard to ignore coverage of this year's March...
view all Catholic blogs
What Are Your Thoughts?leave a comment