Three become one: historic merger of seminaries in New York 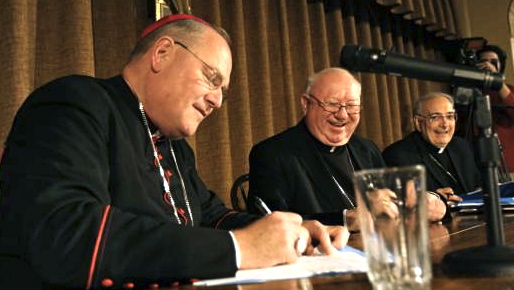 This ambitious move has been in the works for many months, but yesterday it became a reality.  From the In My Backyard Desk (with a cheerful diaconal bow in the direction of The Anchoress):

Archbishop Dolan and his brother bishops of the Diocese of Brooklyn and the Diocese of Rockville Centre Nov. 10 jointly signed a joint operating agreement creating a single program of priestly formation for their three dioceses at St. Joseph’s Seminary in Dunwoodie beginning in September 2012.

The bishops also announced the formation of a comprehensive new program for the ongoing theological and spiritual enrichment of priests and permanent deacons, and a centralization of lay ministry programs to support the New Evangelization.

“By embarking together on a single program of priestly formation, we three bishops have demonstrated our commitment to providing the best training and preparation we possibly can for our future priests,” said Archbishop Dolan in his remarks to the media at Immaculate Conception Seminary in Huntington the evening the agreement was signed.

Archbishop Dolan, speaking on behalf of Bishop Nicholas DiMarzio of Brooklyn and Bishop William Murphy of the Diocese of Rockville Centre, expressed the prelates’ “immense confidence” in Msgr. Peter Vaccari, the current rector of Immaculate Conception Seminary and a priest of the Diocese of Brooklyn, who it was announced will become rector of St. Joseph’s Seminary at the beginning of the next academic year.

Speaking of his own seminary experience, first as a student and then as rector of North American College in Rome, Archbishop Dolan said it provided him with the opportunity to meet and form friendships with seminarians from throughout the United States. He said he envisions the potential for similar bonds forming among the approximately 100 seminarians from the three downstate New York dioceses, and possibly other dioceses, who will take up their priestly formation at St. Joseph’s Seminary in September.

“We’re going to be providing them with the opportunity to form friendships and relationships that will stay with them for the rest of their lives,” the archbishop said.

With St. Joseph’s Seminary soon to begin serving men from all three dioceses studying for the priesthood, Bishop Murphy said he believes that seminarians studying there will benefit from an even higher quality of instruction and formation than currently exists at Dunwoodie or Immaculate Conception Seminary.

“In my judgment and expertise, the quality of programs we have today at Dunwoodie and Huntington, put together, will be an even greater program for the future,” Bishop Murphy said at the signing ceremony.

The single seminary for priestly formation is far from the only area of cooperation between the three dioceses specified in the agreement. Immaculate Conception Seminary, Huntington, will be home to a new institute dedicated to the ongoing spiritual and pastoral formation of priests. The Sacred Heart Institute for the Ongoing Formation of Clergy will have regular programs of theological and spiritual enrichment for priests and permanent deacons and will also include the new Verbum Domini (Word of the Lord) Preaching Institute, as well as formation programs for international priests and special workshops for new priests.

The seminary in Huntington will also have formation programs for the laity and a retreat center to prepare lay people to be active participants in Church life.

November 13, 2011 Another way to Occupy Wall Street: meet the Sisters of St. Francis
Recent Comments
9 Comments | Leave a Comment
Browse Our Archives
get the latest from
Catholic
Sign up for our newsletter
POPULAR AT PATHEOS Catholic
1

Eucharist: 10 Early Church Quotes About The Blessed...
I am a convert to the Catholic faith. In my evangelical days...
view all Catholic blogs
What Are Your Thoughts?leave a comment

9 responses to “Three become one: historic merger of seminaries in New York”