And now, a nativity scene for the Jetsons

And now, a nativity scene for the Jetsons December 4, 2011 Deacon Greg Kandra 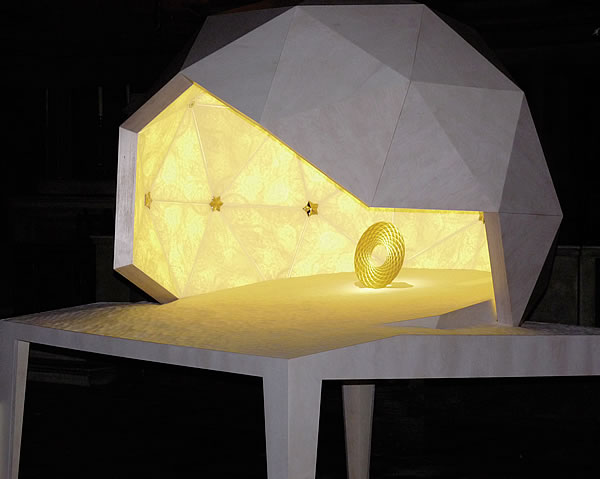 It will be on display at the cathedral in Los Angeles this week, according to The Tidings:

The U.S. debut of “Haute Sphere,” a contemporary interpretation of the Nativity scene conceived by architect Sylvain Dubuisson and crafted by French porcelain manufacturer Bernardaud, will take place Dec. 7 at the Cathedral of Our Lady of the Angels.

A public presentation conducted by Archbishop José Gomez begins at 7 p.m. for “Haute Sphere,” which bears witness to the union of design and the technical and artistic savoir-faire of porcelain craftsmanship to present a modern perspective on the Nativity.

“Haute Sphere” is a geodesic dome hand-crafted of 48 triangular panels of bisque porcelain with stars made of porcelain with platinum finish affixed to its interior and measuring 12 feet in height. Its impressive central feature is an engraved circular porcelain disc “aureole” with 24-carat gold finishes that rests on a bed of sand.

The piece has variable lighting that dramatically illuminates the scene and is enhanced by pre-recorded chants in Aramaic — the language spoken by Abraham, Moses and Jesus — that lend a meditative quality evoking the mystery of the Christmas season for the spectator.

“Bernardaud had never turned its creative force to the objects or symbols associated with Catholics in the practice of their faith,” says Michel Bernardaud, fifth generation CEO. “It was with enthusiasm that we sought Sylvain Dubuisson to help us respond to an appeal from the Madeleine to bring an original perspective to the Nativity scene.”

December 4, 2011
How to welcome Catholics home at Christmas
Next Post

December 4, 2011 Another reason to get the Kindle Fire: the Divine Office app
Recent Comments
17 Comments | Leave a Comment
"I think I would have been happier had the CDF handled the nuns the way ..."
Theodore Seeber Vatican challenges “interpretation” of cardinal’s remarks ..."
"Blaming "Islamics" for this is like blaming the Pope for the Holocaust Denial of Hutton ..."
Theodore Seeber One killed, 44 injured in Catholic ..."
"It smacks to me of hyper-sensitivity, a veiled spiritual and intellectual pride, with regards to ..."
J D Pope Francis: “A Christian who complains, ..."
"Oh, no, we never change our mind, and we always agree, even on points of ..."
Ron Chandonia Vatican challenges “interpretation” of cardinal’s remarks ..."
Browse Our Archives
get the latest from
Catholic
Sign up for our newsletter
POPULAR AT PATHEOS Catholic
1

Forgiveness Heals Us
Forgiveness helps us to mourn a loss in a healthy manner, and...
view all Catholic blogs
What Are Your Thoughts?leave a comment

17 responses to “And now, a nativity scene for the Jetsons”