A toast to eggnog

Curious about where that peculiar holiday tonic originated?  Everything you need to know is here: 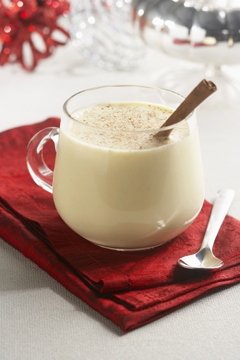 Eggnog really makes you wonder: How did humans first think chugging a spiced and spiked egg-yolk-and-milk mixture was a good idea? It’s a bit like Gaston from Beauty and the Beast: “Now that I’m grown, I eat five dozen eggs, so I’m roughly the size of a barge!” Yet despite its “love it or hate it” fame, eggnog has charmed drinkers for nearly a millennium.

While culinary historians debate its exact lineage, most agree eggnog originated from the early medieval Britain “posset,” a hot, milky, ale-like drink. By the 13th century, monks were known to drink a posset with eggs and figs. Milk, eggs, and sherry were foods of the wealthy, so eggnog was often used in toasts to prosperity and good health.

Eggnog became tied to the holidays when the drink hopped the pond in the 1700s. American colonies were full of farms—and chickens and cows—and cheaper rum, a soon-signature ingredient. Mexico adopted the very eggnog varietal “rompope,” and Puerto Rico enjoys the “coquito,” which adds coconut milk. The English name’s etymology however remains a mystery. Some say “nog” comes from “noggin,” meaning a wooden cup, or “grog,” a strong beer. By the late 18th century, the combined term “eggnog” stuck.

Eggnog purists argue that those who don’t like the Yuletide drink have simply never tasted the real thing. Sugar-laced supermarket versions can’t hold a candle to the homemade goodness, especially since the US Food and Drug Administration permits that the drink can be made from as little as 1% egg yolk. That often borders on “milknog” or egg flavoring.

Our founders would have had none of that. George Washington even penned his own famous heavy-on-the-alcohol eggnog recipe.

You can read that recipe at the link.

December 21, 2011
Alert the Magi: frankincense may be disappearing
Next Post

December 22, 2011 How to wrap a baby in swaddling clothes
Recent Comments
7 Comments | Leave a Comment
"I think I would have been happier had the CDF handled the nuns the way ..."
Theodore Seeber Vatican challenges “interpretation” of cardinal’s remarks ..."
"Blaming "Islamics" for this is like blaming the Pope for the Holocaust Denial of Hutton ..."
Theodore Seeber One killed, 44 injured in Catholic ..."
"It smacks to me of hyper-sensitivity, a veiled spiritual and intellectual pride, with regards to ..."
J D Pope Francis: “A Christian who complains, ..."
"Oh, no, we never change our mind, and we always agree, even on points of ..."
Ron Chandonia Vatican challenges “interpretation” of cardinal’s remarks ..."
Browse Our Archives
get the latest from
Catholic
Sign up for our newsletter
POPULAR AT PATHEOS Catholic
1

EWTN CEO Endorses Donald Trump for President
EWTN CEO Michael Warsaw only mentions Donald Trump by name once, and...
view all Catholic blogs
What Are Your Thoughts?leave a comment

7 responses to “A toast to eggnog”