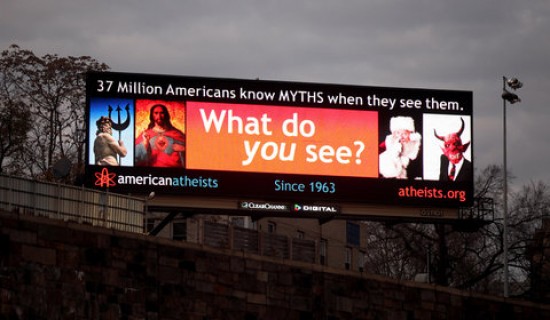 Nearly $40,000 was spent during the last Christmas season on a billboard war between atheists and Roman Catholics at the New Jersey entrance to the Lincoln Tunnel. But so far, this year’s version of the atheist billboard has failed to generate much of a fight.

The American Atheists’ new orange and black billboard, just to the left of the Lincoln Tunnel entrance on the New Jersey side, depicts four images side by side: a statue of the Roman god Neptune, a classical portrait of Jesus, a rosy-cheeked Santa touching his nose and a guy in a suit and a devil mask.

“37 Million Americans know Myths when they see them,” it says in smallish letters at the top. In large letters at the center, it asks: “What do you see?”

The purpose of the $25,000 billboard, which went up in mid-November, said David Silverman, the president of American Atheists, is to “call out” closet atheists during the holiday season and get them to be truthful about who they really are.

“This is when the closeted atheists go to church to be viewed as Christians, and this is when we want to call them out to stay home and enjoy the holidays,” he said. “We want people to realize that there may be atheists in their family, even if those atheists don’t even know they are atheists.”

Last year, their message to closet atheists was a bit more direct. A huge billboard in the same location depicted silhouettes of the Three Kings on horseback headed to the manger against a starry sky, framed by the words: “You KNOW it’s a Myth.”

It was so direct, in fact, that it inspired an anonymous 80-year-old Austrian man to call up the Catholic League for Religious and Civil Rights, an organization based in New York, to offer to pay for a counter billboard. Hence the Catholic salvo, a billboard depicting the infant Jesus with Mary and Joseph that said: “You Know It’s Real: This Season, Celebrate Jesus.”

This year, the Catholic League is not going to respond, said Bill Donohue, its president. One reason? The atheists’ new billboard isn’t good enough, he said. (And, when they called the anonymous Austrian donor this year, he did not call back.)

December 7, 2011
A Catholic wedding performed without a net
Next Post

December 7, 2011 RIP, Harry Morgan
Recent Comments
12 Comments | Leave a Comment
Browse Our Archives
get the latest from
Catholic
Sign up for our newsletter
POPULAR AT PATHEOS Catholic
1

Law, Order, and Amy Coney Barrett
A Little Bit of Nothing
Books by This Author Books by Deacon Greg Kandra 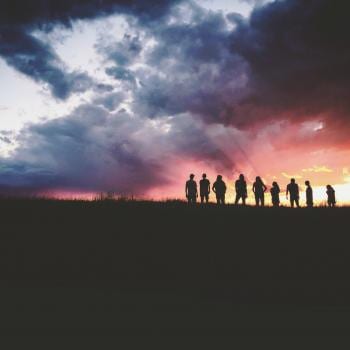 Catholic
Is this what church looks like in a...
The Deacon's Bench 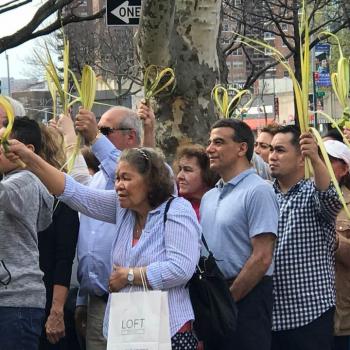 Catholic
Enter the Sanctuary Singing: My Palm Sunday in...
The Deacon's Bench 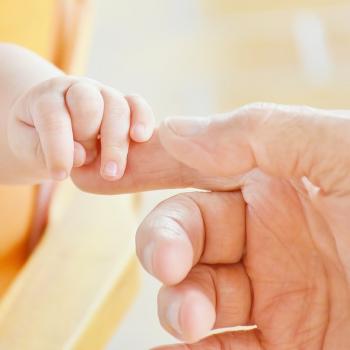 Civil Unions? Girl Bye...Benedict's the Real Gay Icon
[Camp] is not a natural mode of sensibility, if there be any...
view all Catholic blogs
What Are Your Thoughts?leave a comment

12 responses to “Another sign of Christmas: billboards from atheists”