Answering the call: meet a seminarian…and his wife

Here’s something we don’t encounter very often: a story about seminarians preparing to get married.  They are Greek Catholic, in Ukraine, and the story comes from the pages of the current issue of ONE magazine: 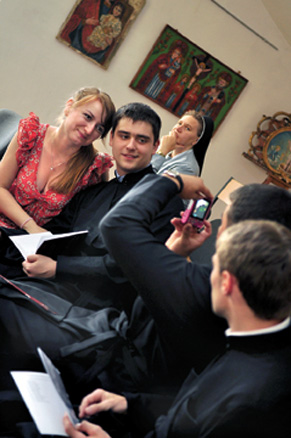 In the Greek Catholic tradition, seminarians are permitted to marry prior to ordination. But some still choose a life of celibacy; if they do, they cannot marry after they are ordained.

All the Kosylivtsi priests decided to remain celibate, including Father Holiney and the newly ordained Father Moysiak.

“It is my personal choice,” explains Father Moysiak. “The third year of seminary was decisive for me. I weighed all the factors and decided to remain unmarried. An unmarried priest, in my humble opinion, is better prepared to follow his calling.”

However, most Ukrainian Greek Catholic faithful feel quite differently about married priests. “Usually, there are only three to five unmarried priests from each class of about 30 graduates,” says Father Mykolai-Volodymyr Fredyna, rector of Holy Spirit Seminary. “Such statistics can be explained by the fact that parishioners are used to having the priest’s family serve as a model for them.”

Each year, Holy Spirit Seminary hosts a retreat for the seminarians’ fiancées. Priests and their wives as well as other lay and religious leaders give talks and lead discussion groups about the challenges, joys and expectations of married life in the church. Often during the retreat, a few women realize the lifestyle is not for them. Most, though, happily marry their fiancés.

“Quite a few girls dream of becoming priests’ wives, especially those from villages,” says Father Dmytro Hrynyk, who graduated from Holy Spirit in 2008 and has since served as a pastor at Church of the Deposition of the Robe of the Holy Mother in Lviv. “Though my wife, Khrystyna, tells me she married me as a person first and foremost.”

Read the rest. And check out more articles from the magazine here. And to learn more about Catholic Near East Welfare Association (CNEWA), visit our website.

December 1, 2011 The next battleground in modesty: yoga pants
Recent Comments
34 Comments | Leave a Comment
"I think I would have been happier had the CDF handled the nuns the way ..."
Theodore Seeber Vatican challenges “interpretation” of cardinal’s remarks ..."
"Blaming "Islamics" for this is like blaming the Pope for the Holocaust Denial of Hutton ..."
Theodore Seeber One killed, 44 injured in Catholic ..."
"It smacks to me of hyper-sensitivity, a veiled spiritual and intellectual pride, with regards to ..."
J D Pope Francis: “A Christian who complains, ..."
"Oh, no, we never change our mind, and we always agree, even on points of ..."
Ron Chandonia Vatican challenges “interpretation” of cardinal’s remarks ..."
Browse Our Archives
Follow Us!

Steve Skojec: Pope Francis is a Two-Faced Liar...
Folks, this is an absolutely classic, playbook example of what I have...
view all Catholic blogs
What Are Your Thoughts?leave a comment

34 responses to “Answering the call: meet a seminarian…and his wife”