Christmas card of the year 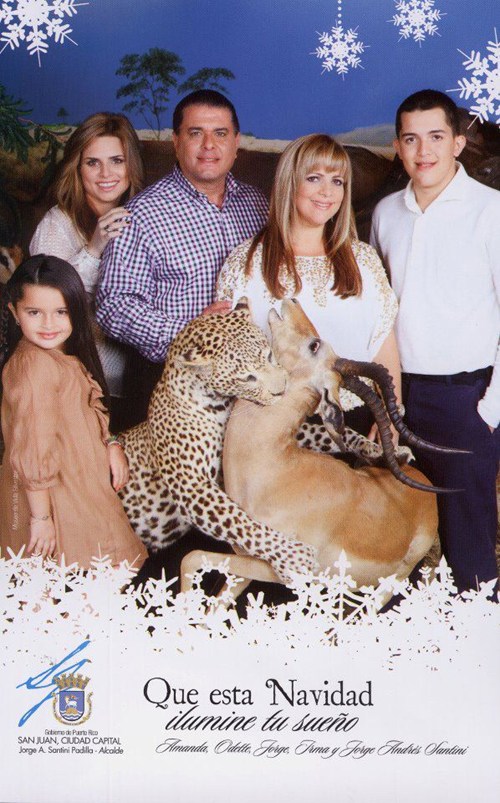 The mayor of San Juan, Jorge Santini, is sending the card pictured above to some of his friends. (Mine must have gotten lost in the mail…but it’s popped up in the interwebs).

This story in a San Juan paper explains (via Google translator):

According to El Nuevo Dia, the image is one of five that were taken at the Wildlife Museum of the municipality to distribute them as Christmas cards. There is another in which the [the] Santini-Garriga [family] appears next to a penguin and elephant….

“May this Christmas light your dream,” say the Christmas cards that have been released through social networks.

Peace on earth, goodwill to gazelles …

December 10, 2011
Something we never see, but should
Next Post

December 10, 2011 Meet the "Nones": "We may not believe in God, but we hope to one day"
Recent Comments
12 Comments | Leave a Comment
"I think I would have been happier had the CDF handled the nuns the way ..."
Theodore Seeber Vatican challenges “interpretation” of cardinal’s remarks ..."
"Blaming "Islamics" for this is like blaming the Pope for the Holocaust Denial of Hutton ..."
Theodore Seeber One killed, 44 injured in Catholic ..."
"It smacks to me of hyper-sensitivity, a veiled spiritual and intellectual pride, with regards to ..."
J D Pope Francis: “A Christian who complains, ..."
"Oh, no, we never change our mind, and we always agree, even on points of ..."
Ron Chandonia Vatican challenges “interpretation” of cardinal’s remarks ..."
Browse Our Archives
get the latest from
Catholic
Sign up for our newsletter
Books by This Author Books by Deacon Greg Kandra

12 responses to “Christmas card of the year”