Circle of light: behind the Advent wreath 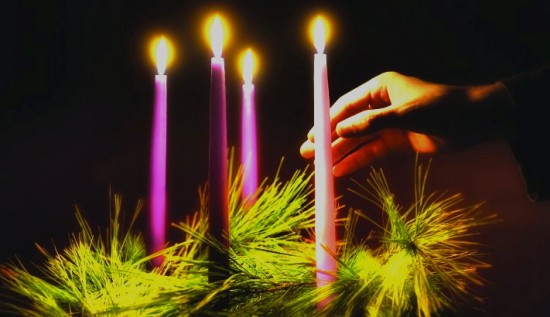 It’s a popular fixture in Catholic churches and homes, but the Advent wreath comes with a long history and rich meaning.

From the Catholic Sentinel in Portland, OR:

Advent is about more than marking an event 2,000 years ago and the wreaths help make that clear. Progressive lighting of candles symbolizes a two-part hope surrounding Jesus’s first coming into the world but also the anticipation of his second coming to judge the living and the dead, says the U.S. bishops’ Committee on Divine Worship. The very word Advent means “coming” or “arrival.”

The four candles represent the four weeks of the season. Three are purple — symbolizing prayer, penance, preparatory sacrifices and goods works. One is rose, a sign of rejoicing because the faithful have arrived at the midpoint of Advent, when their preparation is now half over and they are close to Christmas.

The season of Advent is a late comer to Christian tradition, says Providence Sister Jeremy Gallet, director of the Archdiocese of Portland’s Office for Worship.

The early church focused on the paschal mystery and Christ’s return. By about 325 A.D., Christians began formal Christmas celebrations. Gradually, a season of preparation built up and combined the two comings of Christ — in Bethlehem and at the end of time.

The wreath tradition is linked to pre-Christian Germanic practice, when villagers lit candles as a sign of hope for warmer and brighter spring days. In Scandinavia, candles were placed on a wagon wheel, an invitation to the gods to turn the earth back toward the sun.

By the Middle Ages, Christians adapted the tradition and used wreaths as part of Advent, writes Father William Saunders, dean of the Notre Dame Graduate School of Christendom College in Virginia. By 1600, Father Saunders says, both Catholics and Lutherans had more formal practices surrounding the Advent wreath.

The wreath came to carry multiple symbolic meanings. The circular shape is seen as a reminder of God’s presence and mercy, which has no end. The green symbolizes of hope for renewal and eternal life. Candles signify the light of God coming into the world, and remind worshipers that they, too, are called to be light in the Kingdom of God.

For centuries, Advent was a time of penance and fasting. As the notion of penitence gave way to a theme of expectant preparation in the 20th century, Advent wreaths had a resurgence in Catholic homes and then in churches.

“Anything that helps us focus on something beyond ourselves is good, especially in this age when we are so material,” Sister Jeremy says.

December 9, 2011 In hard times, a surge in cremations
Recent Comments
3 Comments | Leave a Comment
Browse Our Archives
get the latest from
Catholic
Sign up for our newsletter
POPULAR AT PATHEOS Catholic
1

Law, Order, and Amy Coney Barrett
A Little Bit of Nothing
Books by This Author Books by Deacon Greg Kandra

082: A Conversation with an Exorcist (w/ Father...
In this episode of The Cordial Catholic Podcast, I'm joined by Father...
view all Catholic blogs
What Are Your Thoughts?leave a comment

3 responses to “Circle of light: behind the Advent wreath”